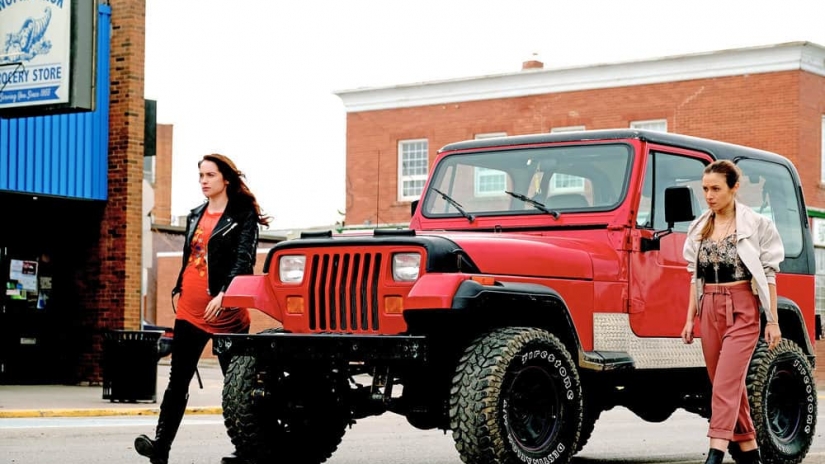 Wynonna Earp ends the season with a birth, a resurrection, and one hell of a Momma Earp reveal. Spoilers ahead…

It’s hard to pull off a great TV season finale. You have to answer enough questions to bring closure to the season’s arcs, while also leaving the viewer with mysteries and lingering threads that leave them hungry for more. Hoo boy did Wynonna Earp do that with I Hope You Dance.

Baby Earp was born! Waverly isn’t a revenant! Jeremy has some kind of super secret power! And, oh yeah, Momma Earp is alive and well and hanging out in the Canadian wilderness where Wynonna can apparently visit her. Those were just the major highlights of an hour of television that saw the supernatural family show pulling the trigger on all of its Chekhov Peacemakers.

Like last season, Wynonna Earp spent a season building on the mysteries and relationships that would come to eloquent fruition in its final instalments. It tied the rollercoaster of a ride together through some stellar character development and a common theme: family — the ones we choose, the ones we get stuck with, and the ones we betray.

Let’s break this season finale down!

Let’s hope this isn’t the last we’ve seen of Wynonna and Doc’s (yes, she is Doc’s) daughter. After a half-season of waiting to meet the Littlest Earp, she is ushered away via helicopter by Perry, aka Wynonna’s former classmate and high school reunion date from Episode 3. Talk about going well beyond the duties of a high school reunion date!

The helicopter departure is part of an elaborate plan Wynonna has been working on with Nicole, confidently heartbroken in the knowledge that Baby Earp will never be safe in the Ghost River Triangle. One need look no further than Rosita’s understandable, yet disappointing betrayal for proof of that. That baby has every revenant in town and the Legion of Burly Purgatory Firefighters after her within minutes of her birth. If Wynonna and Waverly learned anything from their childhood, it’s that growing up an Earp in Purgatory does not usually make for happy memories.

But that doesn’t mean the decision is an easy one for Wynonna, Waverly, or Doc. Melanie Scrofano has been slaying it all season with Wynonna’s emotional, yet in-character processing of the intense situation she has found herself in. This pregnancy has been a series of hard decisions after another, and choosing to give Alice up to be raised by Aunt Gus may be the hardest and the easiest all wrapped into one. It’s also proof that Wynonna is a good mothre. I just really, really hope we see that kid again.

Before Alice gets on her private helicopter, she gets a chance to say hello to her dad (who spends much of this episode racing back and forth across the frozen Canadian tundra, bless his heart). It’s a stoic, heartbreaking scene, one that is made all-the-more-powerful for the way Doc has been supportive of Wynonna and his unborn child throughout the season. Like Wynonna, Doc’s feelings on the subject of letting his daughter go are bittersweet. This is a man who was asked to split a bullet by shooting in the direction of his Baby Mama and unborn child, but who looks the most miserable when he’s watching his daughter fly away.

It’s a quiet scene that sees Wynonna and Doc reunite after Alice’s departure. Though the rest of the gang, especially Waverly, seems heartbroken to give Alice up (Jeremy lets slip at one point that he calls Baby Earp “The Pod” in his head), no one save for Doc can quite understand what Wynonna is feeling. He sits with her, and asks about his daughter’s name — Alice Michelle, after their two mothers — and silently agrees when she pledges to break the Earp curse for their daughter. It’s enough, for now, even though nothing really is.

Bulshar is back. While much of Wynonna Earp teased the danger of the Reverend Clootie for much of the second season, the show played it coy on the Bulshar front in the finale, giving the last two sister-wives their comeuppance (thanks to Doc’s mad sharp-shooting skills), but only teasing at the curse-creating monster to come. It was a smart decision. This season was about the extent we’ll all go to family — both the family we’re born into, and the family we’ve chosen. We see the positive side of that with Team Earp, but we see the negative side of that with Team Clootie.

Though the Black Widows may be gone, Bulshar has a willing minion in Bobo. The revenant may be trapped down Doc’s well, but I doubt he will stay there for long. I’m not sure if I believe Bobo’s choice to join Team Clootie, especially after the lengths he’s gone to protect Waverly in the past, but hell changes a person, I suppose. And, like Rosita, Bobo knows that, in the end, Wynonna will send him back to hell. Now that she has a daughter to protect from the legacy of the curse, Wynonna is not messing around when it comes to crossing revenants off her list.

The most interesting aspect of Bulshar’s return, I think, is the reveal that Wynonna seems to know a fair bit about him. When she rides off to see her mother in the Canadian wilderness, she tells her Momma that she was right about Bulshar’s inevitable return, implying that her mother has told her stories. Why didn’t Wynonna mention this before? Has she been visiting her mother this whole time? And does anyone else know about Momma Earp’s “nearby” status? With the reveal that Waverly is not, in fact, a revenant, Momma’s input on the matter could be quite helpful.

Like most of the rest of Wynonna Earp Season 2, the finale episode was a master class in supernatural drama storytelling. This show took an unexpected, real-life “complication” — the pregnancy of its lead actress — and built its season around it. The bravery, heart, and feminist subversiveness of this show has been written about a lot, especially post-pregnancy reveal, but it bears repeating: Wynonna Earp isn’t just one of the most fun shows on TV; it’s one of the best, full stop.

Read Kayti’s review of the previous episode, Gone As A Girl Can Get, here.