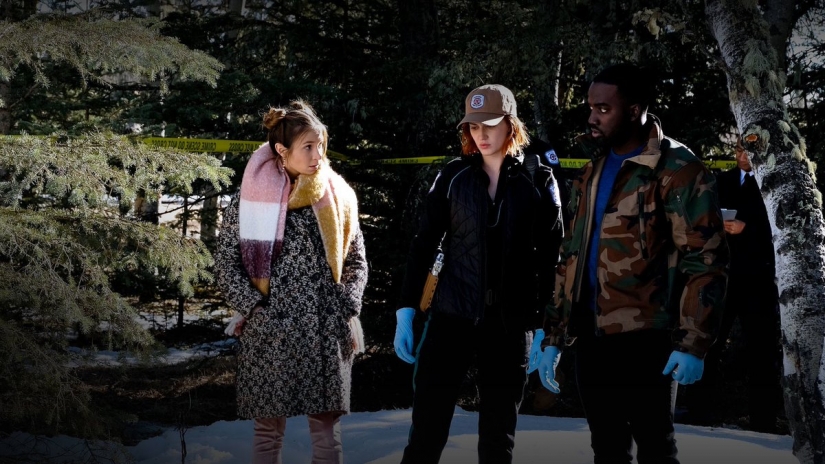 There were so many revenant-related reveals in tonight’s Wynonna Earp. One of them — the twist that Waverly is half-revenant — you may have seen coming. The other — the reveal that Rosita herself is a revenant — caught me by surprise. Both, however, were part of another emotionally-driven, action-packed episode of a Wynonna Earp season two that refuses to play it safe.

Let’s talk about that Rosita reveal first because it came after an episode that let us get to know this new character a bit better. Rosita continued her efforts to get to know the Earp sisters, taking a confused, sad Waverly with her to the spa with the gift certificate Dolls gave her.

It was sweet of Rosita to think of Waverly. She may be trying to get ingratiate herself with the Earp sisters because Doc suggested she might need them as protection should something happen to him, but she also genuinely seems to like them. Earlier in the episode, we see her and Wynonna chatting natural vs. drugged birth. Then, we see her acting as a confidante and source of encouragement for a Waverly struggling to come to terms with Nicole’s betrayal concerning Waverly’s paternity.

While in the sexy hot tub with Waverly, Rosita opens up a bit, telling Waverly about her multiple PhDs and waxing poetic about the bubbles in champagne. It’s that latter conversational point that has Waverly leaning in to kiss Rosita, something Rosita seems totally open to. They’re both with people they care about — Rosita is with Doc and Waverly is with Nicole — but it’s easy to see how, if they weren’t already involved, there might be something there.

Of course, so much of Waverly’s romantic play had to do with her confusion and pain over Nicole’s recent choices and generally quasi-controlling, over-protective nature. Also, champagne. Waverly loves Nicole, but it’s complicated. In that moment, in the hot tub, Rosita seemed less complicated. They both almost immediately realise it’s a bad idea. Rosita maturely removes herself from the situation, while Waverly follows after her to apologise.

Of course, Waverly’s speech has to be put on hold due to Tucker killing Rosita. The Gardiner creep has always been in love with Waverly, and has now faked his own death to get the Women in Black off his back. He chooses not to flee completely because he can’t leave Waverly behind. Waverly tries to play along, but is obviously skeeved out by the whole situation. Earlier in the episode, Nicole tried to warn Waverly about the danger of Tucker — something Waverly knows perhaps better than anyone. I hope these developments won’t keep Nicole and Waverly from having the conversation they really need to have in favour of basking in their (hopefully) inevitable reunion.

Waverly would have had to go with frostbitten Tucker (at least until she figured another way out) if not for Rosita, who rises from the undead to take Tucker out and rescue Waverly. In doing so, she exposes her secret to Waverly: Rosita is a revenant. It’s something Doc must know and something Rosita seems to have reluctantly come to terms with in the last century or so. Sadly, she has come to expect the worst from others’ reactions, asking Waverly how long of a head start she’ll give her before telling Wynonna.

But the Earps have always been good at keeping secrets. Besides, Waverly has a revenant-shaped one of her own: she’s most likely half-revenant. When she tells Rosita, it’s the first time she’s told anyone, bonding the two together in their little bubble of secrecy. It’s also a major step for Waverly accepting it herself. If Rosita is full-revenant and she’s so cool, smart, and good, then being half-revenant can’t be too bad, right?

What happens to Tucker? The creeper scurries off into the woods, looking for Waverly, only to come upon one of the Women in Black, instead. She’s not too happy with Tucker’s betrayal, gnawing on his wrist as recompense. Is she a vampire as well as a witch, working to turn Tucker into a member of the undead? Or is she just starting her Tucker-shaped meal on the stringy parts?

But it’s the other Woman in Black I’m most concerned with. While Dolls stumbles upon the real Mercedes Gardiner, crawling around faceless in the basement of the Gardiner house, the demon with her face shows up at Nicole’s house and it doesn’t look like she’s hoping to join in on Nicole’s morning yoga routine.

The last time we saw the witch, she was doing a spell using Constance’s head that would lead her to the third seal. Does she think Nicole has it? Did Wynonna bring the ring over there for safe-keeping after Doc gave it to her? Could they have all been wrong about the third seal? Or is the seal the ring and the Woman in Black is planning to use Nicole to get Doc/Wynonna to give the ring over? Whatever the answers to those many, panicked questions, I think we can all agree that this was quite a twist, especially when Rosita had just convinced Waverly to go over to Nicole’s and make things right between them.

For me, the least successful part of the episode (which really isn’t too much of a diss when the rest of the episode is so great) was the Wynonnna/Doc stuff. Wynonna’s efforts to convince Doc to give her his immortality ring — aka the third seal — were tonally confused. Because I didn’t understand how the creepy doll painting Doc brought over worked, I didn’t understand what Wynonna and Doc were doing because they wanted to do it and what Wynonna and Doc were doing because the creepy doll painting brought it out of them.

That being said, I would watch these two make teary eyes at one another for all of the scenes, and there were some harsh, but potentially necessary truths brought up in their fight. It was fascinating to watch Wynonna prod at Doc’s reasons for wanting to keep the ring, using her knowledge from last week’s vision quest to poke holes in Doc’s self-mythology a bit. It’s not unfair of her to ask Doc to age like the rest of it, even if it’s also easy to understand why Doc might see it as a kind of security blanket.

One of my favourite scenes of the episode, and of Doc’s storyline thus far, came in his retelling of his remembrance of his mother’s death. When she was dying of tuberculosis, a young Doc wasn’t allowed to see her, so he would crawl into the space beneath the floor (Octavia Blake-style) to be close to her. It was from that confined space that he listened to her die. If you were wondering if Doc has always loved fiercely, then you have your answer right there.

Despite Wynonna and Doc’s differences, the fight solidified the connection between these two because there is one thing they both agree on: whatever disagreements they may have, Doc belongs at Wynonna’s side. The two basically get superhero-engaged over that promise, with Doc handing over his ring (and his ageless-ness with it)

Read Kayti’s review of the previous episode, No Future In The Past, here.