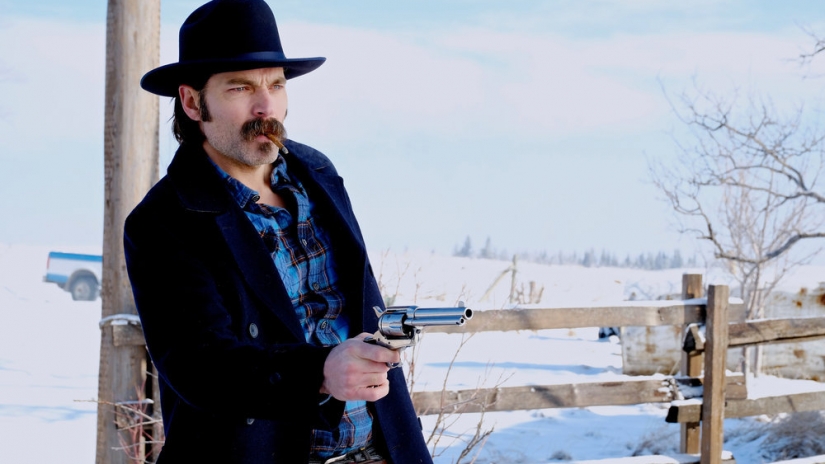 This is the conversation Wynonna and Waverly have moments after Wynonna has shot and sent to hell the possible father of her child. This is after the two had to listen to said demon asshole spew a whole lot of sexist, hateful, slut-shaming stuff at the already emotional Wynonna. This is after two short weeks of Wynonna having to come to terms with the fact that the universe has literally decided that she should be pregnant and made it so. Destiny, amirite?

But Wynonna doesn’t crack under all of these pressures. Because showing emotion isn’t cracking. It’s being honest. It’s being brave. Because allowing others to see your vulnerabilities is one of the bravest things you can do.

In the midst of her own personal crisis, Wynonna even demonstrates a degree of empathy (because woman are socialised to think about others even and perhaps especially when they are falling to pieces themselves) for the broflake who might be the father of her child. He is from a time when the world was even more misogynist. But, you know what? So is Doc and, when you compare this little speech to the one Doc delivered, there is no comparison. Being a century or so old is no excuse to be a misogynist. If Doc Holiday can work through this stuff, then so can you.

Doc and The Revenant Broflake are at opposite ends of the masculinity spectrum. Doc may be emotionally-reserved and old-fashioned when it comes to expressing things, but he respects Wynonna. He lets her take the lead and says he will be there for her in whatever manner she needs, recognising that this is a lot to deal with and, while it has something to do with him (maybe), she is the one who is carrying this baby.

In the end, Wynonna and Waverly seem to make the decision to get rid of revenant scumbag together, though it is ultimately Wynonna’s choice if she wants to shoot the potential father of her unborn child. The revenant obviously thinks she would never do such a thing. He can’t imagine Wynonna not needing or wanting his support in some form (even if it is his mere presence in the world) in raising their child. He is probably already planning his inevitable debut on Jerry Springer’s “So the father of your child is a zombie…” very special episode.

He doesn’t understand that Wynonna already has a family or that she is strong and her support system is strong. That support system isn’t crippled by rigidly ‘traditional’ societal expectations that leave single mothers or even two parents drowning in the responsibilities of childcare. Team Wynonna’s got this. And there’s no place for sexist revenant. Even if he is the kid’s father.

And what of the baby’s possible revenant-human hybrid status? (Is this why the baby was immune to Hypnos’ dream state reset in the last episode? Because he or she is part revenant?) Well, Waverly turned out okay and it’s heavily hinted at in this episode that she, too, is the result of a union between a human (Waverly and Wynonna’s mother) and a revenant, so we’re not too worried about this kid. With this group of adults to watch over him or her, they’ll be okay.

I know this because season two of Wynonna Earp has done an amazing job nurturing many of the “supporting” relationships. I’ve written about the complicated dynamic between Nicole and Wynonna in previous reviews, but it is on display yet again in tonight’s episode, albeit in a much less contentious manner.

The two, dare I say, seem to be friends. It seems that Nicole’s supportive acceptance of Wynonna’s pregnancy in last week’s episode meant more to Wynonna than we thought. It makes sense. Gestures of support can feel bigger in times of personal crisis. To Nicole, agreeing to keep Wynonna’s pregnancy a secret and also not treating Wynonna any differently might have seemed like a small thing. To Wynonna, it was everything.

Another supporting dynamic Everybody Knows focused on is the ones between Doc and Dolls. Wynonna Earp is aggressively feminist in so many ways, including its resistance to falling into the We Like The Same Person, So We Must Be Enemies trap. (This is usually a trope burden foisted upon female characters, but its structure in general stinks of a larger obsessions with the ‘neatly’ narrow boxes of heteronormativity.)

No, Doc and Dolls have things in common and, when Doc’s life is in mortal danger by a ghostly marshall from the turn of the century, Dolls steps up to save him. In the process, he inadvertently lets Doc know how he sees him: which is, well. In other words, they totally love each other. These men have been through a lot together. They support one another not just because they both love and respect Wynonna, but because they love and respect one another. That’s what a family is. It’s not one person and everyone who loves and supports them. It’s a group of people who love and support one another.

Ultimately, Dolls is the one who tells Doc he needs to step up for the pregnancy. (Even though Doc has been doing a pretty damn good job of it without Dolls’ insistence.) Besides, everyone knows Doc is a old softie. At one point in this episode, he pulls a blanket up over a sleeping Jeremy. See, he’s already a great paternal figure!

Speaking of Jeremy, this was a great episode for the supporting character, who not only had some hilarious lines, but continues to endear himself to the viewers with how much he loves Doc and Dolls. At first, I wasn’t so sure of his character — and I woold still like to see some fleshing out — but, in the meantime, he is making me laugh out loud multiple times per episode with his bad wizardry and his quips. Besides, in this episode, he accidentally bonded himself, Doc, and Dolls together, resulting in some of the best physical humour this show has ever done. Jeremy can stay.

In other news, Wynonna finally got a doctor and she is competent, boldly communicative, and doesn’t seem too put off by all of the weirdness Team Wynonna actively emotes. Tucker is still missing after having killed the Stone Witch. And Wynonna is totally on to the Gardiner sisters.

And, oh yeah, Waverly let it slip to Wynonna that she’s probably not an Earp. Thank God. Now someone can explain to her that being an Earp is about more than blood. Waverly’s sad puppy eyes were making me sad, too. “This baby is ours.” Waverly is Wynonna’s, too.