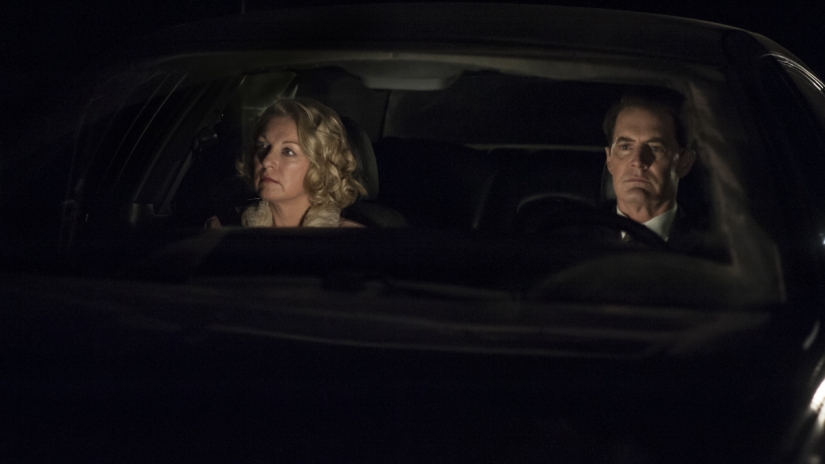 As gripping as it is disappointing, Twin Peaks: The Return once again ends with more questions than answers. Spoilers ahead…

Part 17 “The past dictates the future.”

With the season finale distinctly divided into two separate episodes, Part 17 of Twin Peaks: The Return is unquestionably the more climactic of the two. Considering the unhurried pace at which David Lynch and Mark Frost eased into Cooper’s return in Part 16 (and, well, the entire series), the pacing of this episode is practically breakneck.

Beginning with a joke about how Gordon Cole’s penis is still functional (yeesh), we then get a big chunk of exposition about the infamous Judy, who is an evil entity (so, I’ve narrowed that down to either BOB or that ghostly thing that came out of the box in the first episode and killed those kids or it’s that frog-roach thing or it’s Sarah Palmer, who maybe ate the frog-roach thing as child?).

After that, everything kicks into high gear with a showdown at the Twin Peaks sheriff station. Evil Cooper arriving first is super tense and terrifying; the place is full of characters we care about and he’s really good at killing people. Before he’s dealt with, however, there’s jerk cop Chad’s comeuppance. It comes from a mile away, since we know what Freddie and his Hulk fist are capable of, but it’s still satisfying to watch Chad go down, especially since he was about to kill Andy (I would’ve been massively upset with Lynch and Frost had they let that happen).

Then Lucy shoots Evil Coop in the back. This is pretty awesome, simply because it’s Lucy, who hasn’t gotten to do much this series except act vacant. However, in keeping with this series’ themes, it’s obviously not what we were hoping for. I don’t think I’m alone here in assuming we were getting some manner of Good Coop and Evil Coop showdown. But instead he just gets shot by Lucy. Fine.

The real showdown comes when the bouncing BOB ball we met back in Part 8 emerges from Evil Coop’s body. (I’m appreciative of the few consistencies we received here; we saw what happened last time Mr. C got shot down and, right on cue, here come the Woodsmen to blood-massage him back to health.) Again, it’s very weird just how little Cooper actually has to do here, but then, we knew this was Freddie’s destiny. It’s frankly a little corny watching a guy punch the crap out of a ball with an image of BOB’s head in it. One has to imagine that, if BOB’s actor, Frank Silva, hadn’t died, we’d be seeing a very different version of this battle.

Regardless, I’m happy for Freddie and pleased to see BOB finally(?) obliterated. There’s then the briefest of reunions between Cooper and Gordon. It’s funny and odd what a ragtag group is assembled for this climactic moment (with Cooper’s face bizarrely superimposed over everything). Did any of us think the whole casino crew would make it this far (“One for the grandkids!” says Rodney Mitchum, charmingly normal in the face of all this Twin Peaks nonsense)? I certainly didn’t expect good old James to be there. But perhaps I should’ve seen it coming. After all, James has always been cool.

One other bit of closure is that Naido is, as some fans had speculated, the real Diane. Less expected is that her and Cooper are a serious item. Maybe Lynch just wanted to do a redux of the Laura Dern/Kyle MacLachlan romance from Blue Velvet.

Also unexpected was that a portion of this precious finale running time would be spent rewatching a scene from Fire Walk With Me (now in black and white!). This happens after MIKE shows Cooper into Phillip Jeffries’ room above the convenience store. To digress briefly, I love MIKE (Al Strobel). He’s been in The Return surprisingly consistently and has been a comforting, familiar presence, shepherding us through this dark, new Twin Peaks universe.

Anyway, Coop elects to go back in time and stop Laura from getting killed in the first place. It’s tense and exceptionally well done (they didn’t go in for many close-ups but Sheryl Lee looked truly like her younger self when speaking to Cooper). I found myself begging that Cooper wouldn’t let go of Laura’s hand, that he’d finally lead her away from her traumatic fate, and that she (and we) would finally find some closure.

But, of course, she disappears (possibly somehow her mother’s doing), her bloodcurdling scream echoing into the night, and then it’s time to watch Julee Cruise perform a song from the past at the Roadhouse!

Part 17 was a deeply engrossing thrill, setting us up for the final episode, where all the loose threads would be tied up and all questions answered!

In a truly Lynchian subversion, the real finale of The Return is an all but impenetrable slow crawl, the majority spent watching Cooper silently drive. Scanning Twitter immediately after it ended, I clocked a lot of disappointment, which is absolutely warranted. What did we want from a new Twin Peaks series? Well, with the original series finale of cliffhangers stacked atop cliffhangers, I believe we all felt at least a little closure was in order. Instead we got an ending implying the entire universe is not what we thought it was. “How’s Annie?” is quaint in comparison.

I am pretty annoyed with Lynch and Frost. Sure, I anticipated being in the dark on some of this stuff for the rest of my days, but there were enough pieces fitting throughout this new series to imply that things would come together to some degree, and, yeah, they kind of did… BOB did get punched to smithereens last episode and Janey-E and Sonny Jim get a new clone daddy in this one. But what about almost any of the other characters we care about?

Like Fire Walk With Me before it, The Return left us, throughout, wanting more of the townsfolk whose lives we’d once followed. Why did we learn about Ben Horne’s new secretary (Ashley Judd)’s home life? What’s to become of Shelly and Bobby and their troubled daughter Becky? Most importantly, where the hell is Audrey? The Return’s treatment of her character is practically abusive. She spends three episodes in a room yelling at her weird husband and is then revealed to be trapped in a dream or a mental asylum or something. Just thinking about how little we know about Audrey’s situation, except that it’s obviously a bad one, gets me depressed. (But, hey, at least we know Jerry Horne is okay, if a little naked, right?)

Worst of all, this final episode leaves us not even knowing if any of these characters even exist anymore. In a completely unexpected turn, Twin Peaks seems to have gone all Back To The Future on us. Dale went into the past and (maybe?) saved Laura Palmer’s life but, in doing so, somehow undid her entire existence and she’s now someone named Carrie Page who works at a diner in Odessa.

It’s also unclear if Cooper is even Cooper anymore (he might be named Richard, now?). He certainly believes he is and seems to have retained his ability to easily kick people’s asses (by the way, he’s not known for it, but Lynch shoots this kind of quick, badass action stuff amazingly well). However, though he seems to be virtuous like classic Coop, he’s behaving similarly to Evil Coop, a no-nonsense man of few words. This is something else The Return disappointingly withheld through to the very end: Cooper acting like Cooper. We really only got a glimpse of it in Part 17 (“Is the coffee on?”) and now it’s this new development.

I’ve been analysing this final episode as the capper to the series and, in that sense, with so little wrapped up and so much confusion piled on, it really is disappointing. However, as an episode of television, as another hour of David Lynch weirdness, it was a cool, tense experience.

At first it seemed like this was going to be very much like the original series finale, taking place almost exclusively in the Black Lodge, but luckily Coop handily (pun intended) escaped. For a place that gave him twenty-five years of trouble, this was a liberating sight. I was far less enthused about all the weird opening stuff with Diane, which I don’t understand the significance of, nor why we needed an extended, weird sex scene between her and Coop (guess it was some “just one last fling” thing before the whole universe upended?).

However, everything that followed (if you were able to ignore the voice in your head screaming “BUT WHAT ABOUT AUDREY?!?”) was awesome. The aforementioned scene of Coop beating up cowboy jerks was very cool and the scene where he speaks to Laura/Cassie in her house was fantastic. The contrast of the casual conversation and the oddness of the situation (there’s just a murdered guy there) puts it all in a very strange space. I also love how Cassie’s home is just a crappy, lived-in place with some recently-purchased toilet paper visible, not to mention the gun used in the murder has been carelessly left on the floor.

Finally, Sheryl Lee remains an utterly brilliant actress and her performance in this scene and the next sells all of it. She and Cooper driving mostly silently through the dark is at once melancholy and gripping as we’re fooled into thinking they may be being followed. But nothing happens. They simply get some gas, drive over the infamous bridge Ronette Pulaski once came stumbling across, and arrive at Laura’s old house.

And then what? Cassie doesn’t recognise the place. Sarah Palmer doesn’t live there. Coop tragically, confusedly asks, “What year is this?” At least we end on a signature Sheryl Lee scream.

I enjoyed this episode and the one before it. They were absorbing and sad and bewildering. But as an ending to all of Twin Peaks? Forever? Devastating. Mark Frost’s Twin Peaks: The Final Dossier will be released in October, but even if it answers some questions, I think most fans, myself included, want our closure in televised form.

Maybe I’m a sucker, taking 18 hours of Lynchian abuse and asking for more, but this feels like a setup for another season or maybe a movie and I’d welcome either. However, as of right now, there are no known plans and who knows how realistic this would be anyway, as viewership apparently dropped off quite sharply over The Return’s run. Furthermore, the key players aren’t getting any younger; we even already lost some of the people involved in this series.

Maybe I’ll see you again. Let’s hope much sooner than in twenty-five years.

Read Joe’s review of the previous episode, No Knock, No Doorbell, here.