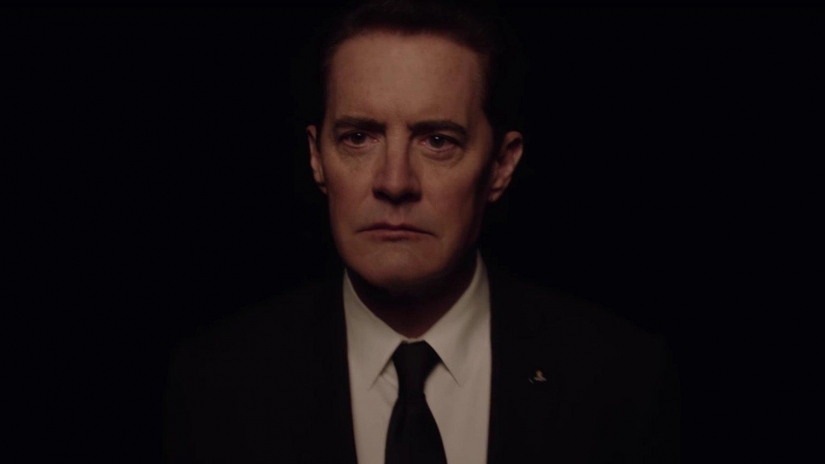 David Lynch finally gives the fans what they want. 100%. Spoilers ahead in our review of No Knock, No Doorbell…

Let’s get this out of the way up front: this was an exhilarating episode of Twin Peaks: The Return that gave me chills all over. How could it not be? David Lynch and Mark Frost finally gave us, after withholding it until the sixteenth hour, what we wanted. That said, I still believe this was a weaker episode than the previous one.

For one thing, before the big payoff came, we got a lot of absurdity with hitmen couple Chantal and Hutch. Though I still anticipate the series ending with a fair number of loose threads still dangling, The Return is surprisingly dedicated to unambiguously closing out many characters’ plots in the most final way possible: murdering the hell out of them. I guess they had to be taken out; even if Dougie/Cooper was never going to return to that house, Janey-E and Sonny Jim would still be in danger. However, Chantal and Hutch met their end in a nonsensical, campy, and violent way that I can only describe as a deus ex machina.

Some guy we’ve never met before just shows up, gets pissed off at them over nothing, rams their car, and then—when Chantal retaliates with gunfire—he shoots the ever-loving crap out of them. I mean, there are enough trigger-happy characters in this show; you’d figure someone we’d already met could’ve crossed paths with this psychopath couple, but no, it’s just some random new guy. In fact, he’s so completely there just to kill off Chantal and Hutch that he doesn’t even get a real name. The actor, Jonny Coyne, is credited as simply “Polish Accountant.”

That sequence left a bad taste in my mouth, but I enjoyed Mr. C and Richard Horne’s scene. It had more of that cool, signature Lynch spooky dark country road driving and, also, they killed Richard! In keeping with The Return’s standard approach to deaths of its new characters, it was abrupt and unceremonious. Richard is such an evil shit that it feels like he surely deserved a greater comeuppance.

However, at least it was a painful, slightly drawn-out death. Also, it only makes sense that Richard would be quickly finished off by a greater, more calculating evil than himself, his own father. Additionally, it deepened our understanding of how singularly focused and unfathomably cold Mr. C is. How naïve I was to think that he’d explain everything to Richard and they’d become a more powerful evil duo. He isn’t even interested in identifying himself to Richard, only acknowledging him as his son after sending him to his doom (“Goodbye, my son” made me guffaw).

Anyway, on to the big reveal: Dale Cooper’s back! For real this time! It was so lovely to see him and hear him confirm he’s “100%”. David Lynch may be the king of subverting expectations, but he’s surprisingly open to key moments blatantly designed to make fans squeal and Cooper turning and saying “I am the FBI” was certainly one of them. Coop didn’t drop any signature lines, but the moment he was awake, he was immediately on the ball and in control of the situation, moving a mile a minute and magically knowing things (like Bushnell’s gun) in his Holmesian way. Just that he was acting like the Coop we wanted all this time—as the Twin Peaks theme blared—was an incredible treat.

It’s also very cool to learn that, during Coop’s time as Dougie, he still had Coop’s consciousness and has retained everything that’s happened to him. There’s been speculation he would forget everything and return to his old life, leaving Janey-E and Sonny Jim tragically alone, but Coop claims to love this whole family thing (which makes sense for his character) and intends to return to be a proper father and husband. While that’s very sweet and you can do a lot worse than marrying Naomi Watts, I still believe Coop is meant to be with Audrey.

In other, “Lynch gives us exactly what we want” news, Audrey did her classic dance (though I don’t recall such active hand movements) to her classic theme. Sherilyn Fenn swaying about with a self-assured smile on her face was lovely and tinged with melancholy. It also felt like our nostalgic hunger was being fed too richly until the rug was pulled out from under us and Audrey’s time in the Roadhouse was revealed to be an illusion.

Fans have figured Audrey is in a coma or being kept in an asylum. It seems to be a combination of both. Audrey appears to have been trapped in a dream as well as in a white room (unless, that too, is an image from her mind). We’re still not clear on just how much of what we’ve seen is Audrey’s dream (I’m hoping not much; “it was all a dream stuff” is typically a lame copout). Though it would explain how a bar in the little town of Twin Peaks gets so many big-name music acts, we’ve seen other characters (James, Shelly, Richard, Chad) turn up there and their actions there bled into events outside of the Roadhouse, so it can’t all be imagined. Anyway, I’m glad Audrey’s situation is becoming more clear and I’m also happy that Audrey’s plight is being built up now because it implies she will be integrally involved with the ending.

Finally, Diane’s revelation that she is not really Diane, but another product of the Black Lodge was extremely tragic and brilliantly played by Laura Dern. It’s no surprise that she was raped by Mr. C, though it was still upsetting to hear confirmed and, even though this isn’t the real Diane, she seems to be imbued with her memories, leading us to believe the real Diane (wherever she is) suffered the same fate.

If I’m honest, there’s a light cheesiness to understanding the rules of the Black Lodge as much as we now do. In the original series, it was a place of abstraction that you had to accept you would never fully understand. Not that I get every little thing that’s going on, far from it, but there seems to be a pretty clear system of rings and seeds that send people to the Lodge and clone them respectively (you also need a bit of hair for the latter). Sorry to be a wet blanket about this, but rules of the Lodge becoming more defined unavoidably detracts some from the unknowability of that place and, well, that makes me a little sad.

Regardless, there were numerous undeniably awesome, chill-inducing payoffs in Part 16 and it’s great that the surprisingly lovable Mitchum brothers, along with Candie, Sandie, and Mandie are, oddly enough, along for the ride to the final showdown in Twin Peaks. This episode left us, beautifully, feeling energized and hopeful for the forthcoming climax, while also sad and worried for Audrey: a perfect Twin Peaks tonal mix. It’s going to be hard to let this show go again.