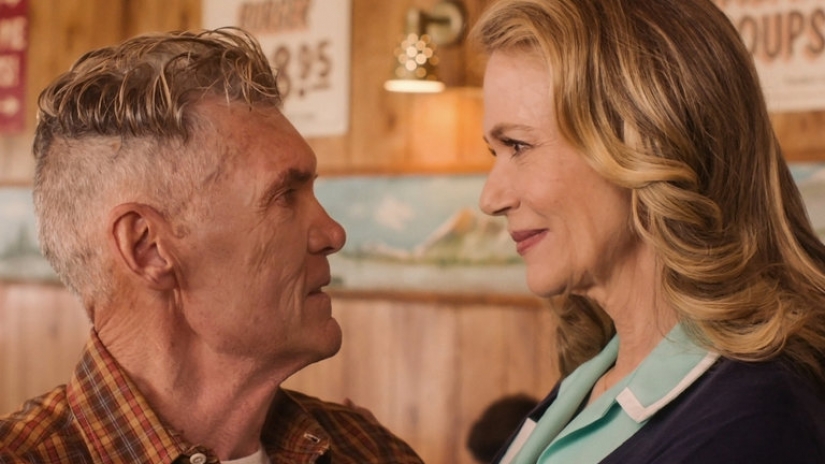 Twin Peaks does what it does best in episode fifteen – mingling soap opera, police procedural and the otherworldly. Spoilers ahead…

As we draw close to the end of this limited series, bombshells are dropping more consistently. This part was a rip-roaring cocktail of murder, love, and deeply sad goodbyes.

Most of the episode is tragic and violent, so it starts us off with a huge, wonderful reward: the long-delayed union of Big Ed and Norma. I’ll admit, it was abrupt. I suppose we’re meant to understand that Nadine and Jacoby (alias Dr. Amp)’s connection two episodes back led to her decision to let Ed go, but it still seems a little sudden and easy.

On the other hand, when it previously appeared Big Ed and Norma weren’t together and that Norma was instead with some boring business dude, I felt it simply made no sense. By this point, they should be together, since (until this episode) there was no indication that Ed and Nadine were still a thing. Norma and Ed are so in love it was illogical to me they hadn’t made it work somehow over these past 25 years, so that it happened this quickly is fine.

I love how big and melodramatic David Lynch went with it. For a series that has been stingy with soundtrack, there was nothing subtle or quiet about this. Otis Redding’s vocals swelled over the scene as Big Ed quietly fell apart (an amazing job by Everett McGill), then Norma appeared, they kissed, Shelly got all choked up, and then we got landscape shots of mountains and blue skies. It made me feel all warm inside.

Then, in a quintessential Twin Peaks tone shift, we were dropped into the heart of darkness as Evil Coop visited the convenience store, home of the Woodsmen and, seemingly, an extension of the Black Lodge. Some fans have been speculating that, with all the references to his character Phillip Jeffries, they might have managed to get David Bowie to do one last scene. Well, sadly, we have our answer here as Jeffries is revealed to be a giant teapot thing voiced by a Bowie soundalike.

Unfortunate though it is that we couldn’t have Bowie himself to reprise his role, I have to hand it to Lynch and Mark Frost for going full steam ahead with pursuing a different creative route. Falling out with Michael J. Anderson? No problem, The Man from Another Place is now a tree with a squishy head. No David Bowie? Okay, then Phillip Jeffries is a giant teapot.

I really enjoyed the scene. As I said, I love when Twin Peaks does both the soap opera and police procedural stuff, intermingling it with the otherworldly. Also, we got a rather disturbing line from Jeffries, “So, you are Cooper,” possibly implying that, somehow, this, not Dougie, has always been our Cooper. And, with a series that regularly name-drops characters we’ve never met before, I got some satisfaction out of someone within the show’s world (especially someone like Mr. C who usually has a handle on everything) being just as in the dark and frustrated as I am about not knowing who Judy is.

Though it was assumed, it was a long time coming for us to hear that Richard is, sadly, Audrey’s son. But wasn’t it nice to see Mr. C handily beat the tar out of him? Unfortunately, now they’re teamed up, which can’t mean anything good. We also got more big hints here about how oddly the passage of time is being handled. Jeffries called Evil Coop only five days ago (this happened right at the beginning of the series) and we witnessed him texting “Las Vegas?” to Diane, a text we saw Diane receive a number of episodes back.

A lot more major stuff happens in quick succession. Steven, who is having an affair with none other than Donna Hayward’s little-known sister Gersten (Alicia Witt), apparently kills himself. He’s mumbling about something he’s done and we don’t know what that is, which is troubling, but otherwise, good riddance, Steven! (Also, the guy with the dog is none other than co-creator Mark Frost reprising his role as reporter Cyril Pons.)

James gets the crap beaten out of him (and is moments later totally fine) and we witness the power of Freddie Sykes’ super-strength green-glove fist in action. Both James and Freddie get sent to prison, where Chad, Naido, and that horrifying drunk with the bleeding mouth are still locked up. I can’t wait till I don’t have to look at that guy anymore. God, he’s disturbing.

Duncan Todd gets unceremoniously murdered by a bizarre, cheap, Lynchian visual effect when redneck hitwoman Chantal shoots him and then we get some hilarious dialogue between her and her husband Hutch (“So-called Christian nation. It might as well be ‘though shalt kill!’). Then Dougie/Coop reacts to hearing Gordon Cole’s name on TV (a super-meta moment, Dougie is viewing a scene from the film Sunset Boulevard from where David Lynch originally nicked Gordon Cole’s character’s name). This moment stands out because it’s the first time Dougie has reacted to something in a way that makes him clearly act of his own volition. And he reacts by, seemingly, electrocuting himself to death.

Though this is unsettling to say the least, we know Coop emerged from an outlet in the first place so it might not be what it looks like. Further, it must be more than coincidence that we then go straight into the Log Lady explaining how death is a change, not an end. It’s also worth noting that the Las Vegas branch of the FBI failed to bring in the correct Douglas Jones, making for another entry in the string of endless “maybe this is how Coop will be saved!” red herrings. It was up to Coop all along to extricate himself from his situation.

The final appearance of the Log Lady, Margaret Lanterman, is incredibly sad. Considering the actress, Catherine Coulson, was herself dying, it’s a real shock to hear her character state as much outright. The music when Hawk announces her death sounds like classic Twin Peaks fare and at first almost feels out of place in this new series, but it ultimately works, bolstering the mood of this terribly sad sequence.

It’s one of the least remarkable scenes, but of course I’m upset Audrey is still just in that room with Charlie (who is still so sleepy). All her scenes are like a weird off-Broadway play all set in one location. I’m ever more worried about her mental health and now I wonder if she isn’t going to get arrested for murdering Charlie. Though it is great when she says she likes Billy better and Charlie sarcastically replies, “Sensational.”

It’s interesting to note how Twin Peaks: The Return has slowly transitioned. For the longest time it was like a long-form abstract film that I could do little but provide a gut reaction to. Now, it’s a (still abstract) drama packed with huge, thrilling moments that I feel obliged to recap and comment on individually. In an indirect way, it’s not unlike the original series.

This was the most enjoyable episode of The Return so far and I’m amped up about the final three episodes. That girl screaming on the floor of the Roadhouse was the coolest ending ever and a dark omen for what’s to come.

Read Joe’s review of the previous episode, We Are Like The Dreamer, here.