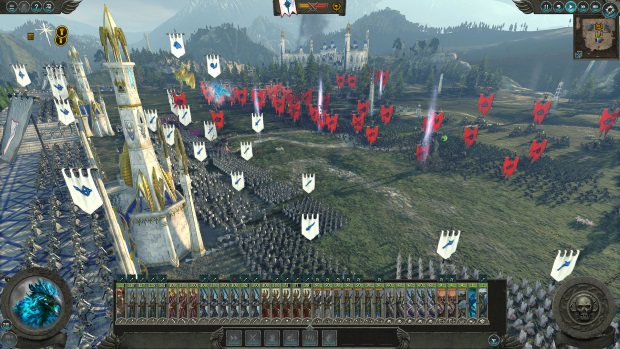 With a second dose of Warhammer, Total War is going loco…

Last year’s Total War: Warhammer seemed like the product of a marriage made in heaven. On the one hand, you had a series that over eighteen years had developed a powerful mix of grand strategy and tactical battlefield warfare. On the other, you had everyone’s favourite fantasy wargame universe; a place where Tolkien high fantasy collides with an anarchic, punk sensibility in a saga that goes from gothic horror to slapstick in a heartbeat.

Total War: Warhammer gave us the best of both, combining the all-absorbing, weekend-wasting interest of the Total War games with the sword and sorcery spectacle and comic ultraviolence of the tabletop classic. In fact, you could argue that the license freed Total War from the tyranny of history, giving the developers’ imaginations free rein to go berserk.

If so, this sequel only pushes the madness further. In shifting the action away from the more conventional fantasy setting of the Empire and the Old World to the New World of Ulthuan, Lustria and Naggaroth, it’s free to explore some of the more exotic regions of the Warhammer universe, along with some of the boldest moves forward the series has employed.

Maybe the boldest involves the whole structure of the grand campaign – a kind of turn-based pseudo board game where the different factions recruit and move their armies, develop settlements into cities and engage in trade, diplomacy and warfare. For a start, simply duffing up your enemies to dominate the map is no longer enough. Instead, you’re competing with the other rival factions for mastery of an all-powerful magic vortex, trying to earn and gather ritual resources that can then be used to perform the five rituals needed to assume control.

That doesn’t mean putting army building and conquest on the back burner, but it means spending time to explore the world and hunt for those precious resources, not to mention prioritising objectives that will net you more of the same. What’s more, you need to move quickly. While you’re playing it safe, developing your economy, researching new technology and trying to build the best army imaginable, your rivals will be going all-out to perform their own rituals, often beating you to the punch. It’s possible to stop a ritual in progress by taking one of the three enemy cities linked to its performance, but only if you can get your armies to the right area quickly, or you have the money to sponsor a local mercenary band.

This is matched by a greater focus on exploration in general, both at land and sea, with ancient ruins that might reveal new threats or rewards, plus shipwrecks and mysterious islands that hold treasures for the taking. A new system of rites, activated when you meet certain conditions, gives you unlockable faction-wide perks that can bolster your offensive or defensive capabilities. Meanwhile, in certain factions the lords that lead your armies can grow fractious and disloyal, meaning you’ll either have to keep them so busy that they don’t have time to think or deal with them when they inevitably rebel. Each little tweak to the formula goes to make the campaign more dynamic.

Yet where Total War: Warhammer II gets really exciting is in the new playable factions you get to control. The High Elves are the most vanilla, though you could never call a bunch of hoity-toity sorcerers riding dragons boring, particularly with their court intrigue mechanics that make your influence key to recruiting the more advanced units. The Dark Elves are both more vulnerable and more immediately powerful in combat, and can summon floating strongholds that function much like cities on the move. If you like to hit hard and fast, they’re an excellent choice.

For most of us, though, the real delights will be the Lizardmen and Skaven. The first, a faction of walking reptiles with a cool Aztec/Mayan vibe, are a blast to play, combining dinosaur-based mounts and war machines with a nasty tendency to go crazy in battle, leaving you constantly on edge that your most powerful troops might descend into bloodlust and lose control. Meanwhile, Warhammer’s classic rat-men play things sneaky, their settlements posing as ruins until actively scouted, with a nice line in swarming troops, backed up by surprise ambushes and some really nasty chemical weapons and shock troops. Each faction gives the main campaign a different feel, but you really see them at their best out on the battlefield. It helps that Total War: Warhammer II is one of the most visually impressive wargames around, putting hundreds of troops on the battlefield alongside dragons, war machines and hulking dinos to create the most spectacular battles this side of Lord Of The Rings. Yet the new factions keep on adding a little extra splash of colour, whether that’s lizards riding raptors into action, a dino that’s part tank, part wrecking ball, or the most dangerous-looking siege weaponry you’ve ever seen – usually quite dangerous to both sides.

And that’s where Total War: Warhammer II wins big. On the one hand, you have this hideously absorbing, in-depth strategy game. On the other, you have a tactical wargame that’s a whole bag of crazy; one that plays by established military rules up to a point, but then goes bonkers for bloodthirsty saurian warriors, elves mounted on dragons, poison-spreading ratmen and assorted hell-spawned abominations. While terrain, range and formations matter, the madness is infectious. It’s going to be difficult going back to historical Total War after this.

Of course, all this depth requires a lot of time and a fair bit of effort, though excellent tutorials and in-game tips are there to help you ease your way in. You’ll still experience the odd weird moment where the AI goes haywire, while the tendency to spam you with attacks every time you start a ritual occasionally makes things a little too tough. It’s also hard to avoid the feeling that this could have been an expansion pack rather than a whole new game, though with effectively eight different campaigns to get through – two per new faction – you can’t exactly complain about a lack of proper content. There’s easily a good sixty to eighty hours or more of play on offer, and that’s without the co-op and competitive multiplayer options. While it hasn’t got the instant appeal of your average RTS – which is where the likes of Dawn Of War III and StarCraft II still win out – Total War: Warhammer II is one of the most accessible and visceral strategy games around. Fans of Warhammer and fans of Total War shouldn’t need any more recommendation, but if you’ve never tried either, it’s time to join the fray.