Top Of The Lake – China Girl episode 2 review: The Loved One 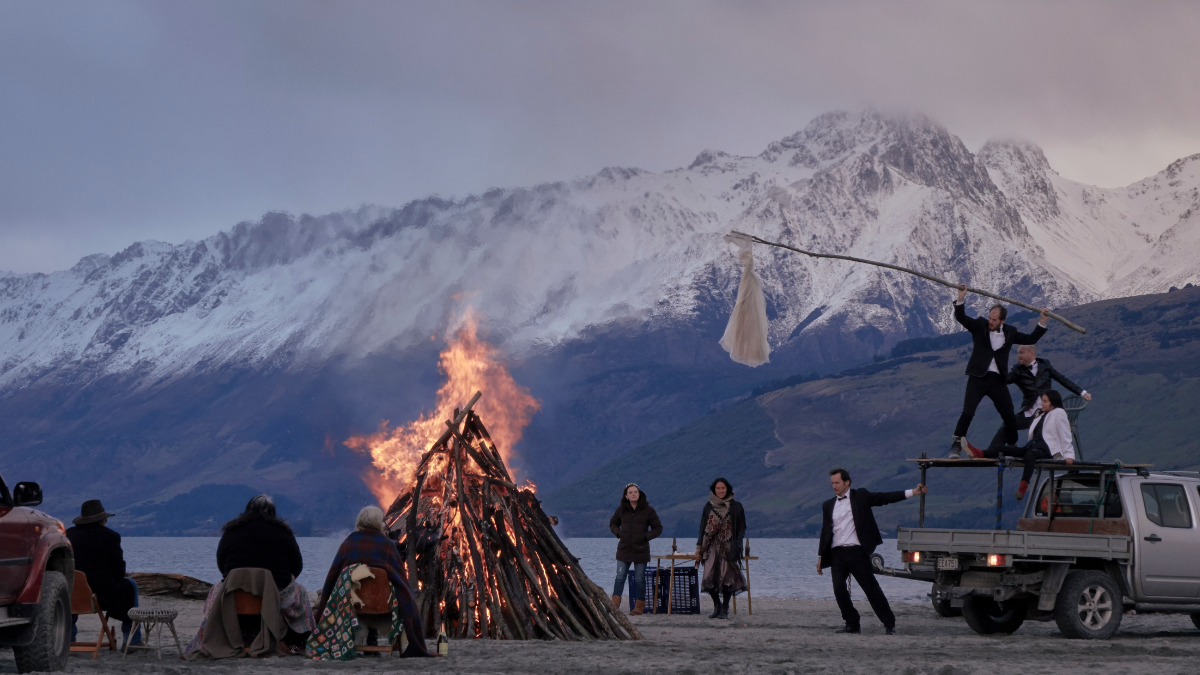 TV is so saturated with crime mystery that it can feel as though we’ve seen it all before. Corpses on slabs, evidence walls, corrupt police, hard-drinking detectives with personal demons… Top Of The Lake has all of the above, with added extras. With strange imagery and offbeat characters, it gives us the genre essentials packaged alongside something new to look at and plenty new to think about.

Episode two’s flashback to Robin and Johnno’s wedding one month earlier overflowed with new things to look at. Unusual sights abounded – Tui in white coattails, the bride in a bomber jacket, her wedding dress suspended from a branch and driven into the flames of a bonfire, all against the backdrop of the glass-still lake and snow-capped mountains. It was a welcome return to series one’s distinct location and proof of this show’s excellent eye for arresting tableaux.

Story-wise, the flashback explained Robin’s rejection of love and obsession with work. Johnno being up to his old tricks (in series one he was fresh from a stint in prison) didn’t put her off marrying him, but his cheating did. Betrayed and unhappy, Robin’s in hiding from life and self-medicating with booze and work. As Ray the kindly pathologist gently told her, “my angel, you are enlivened by dead matter.”

Episode two didn’t shy away from that dead matter. The grisly ‘China Girl’ corpse prosthetic and its horrifically battered face was on repeated display, as was its tiny, salt-water-preserved foetus. Flesh is flesh, Campion reminds us. Bodies rot. Mortality and danger stalk youth and beauty. Scroll across Robin’s phone and you’ll see photos of a murdered woman next to a selfie of her and Mary.

Mary’s friends at Silk 41 aren’t just being used for commercial sex, we learned this week. They’re also being used illegally for commercial surrogacy. That would explain the presence of a doctor at the brothel. It may also explain what Robin’s boss Adrian was doing surreptitiously passing cash and gifts to young Mahlee. Is she acting as a surrogate for him?

Surrogacy takes Top Of The Lake’s plot down a different path than expected and links the murder case to Robin’s storyline with Mary. Surrogate mothers, biological mothers, adoptive mothers… what is it that connects a parent to a child – biology or love? “Mum and dads” muses Mary about her traumatic origin story. “No blood, no loyalty” shout Johnno’s adoptive brothers as they burn Robin’s wedding dress. Is ‘Baby’ right when she tells Robin that blood is thicker than water?

That’s the thematic territory of China Girl, and—Robin’s character notwithstanding—what connects it to series one. That had a child impregnated by ‘no-one’, this has young women carrying babies who aren’t genetically related to them. It all adds up to a rich knot of ideas. Something new to look at; plenty new to think about.

As both a striking sight and strange character, Gwendoline Christie’s Miranda fulfils both of those roles. She provides comic moments (“do you think we all look the same?” she earnestly asks the sex worker contact, despite a clear foot in height between her and Robin; “pocket? But I’m a leopard?” she protests mid Liam’s meditation exercise), and invites curiosity. If she’s pregnant, why is she smoking? Is she in a relationship? If so, why the flirtation with Robin’s brother? There’s a mystery there to unravel.

Campion has surrounded Robin with eccentrics in series two, from Miranda to pathologist Ray, to academic Julia, to the gross café men and their damaged attitudes to women, to the dreadful Puss—whom we saw less of in episode two but whose every appearance is hard to forget—to the strangely self-possessed Mary (Alice Englert made the vulnerability underneath Mary’s confidence much more accessible and sympathetic in that milkshake scene than previously).

The result is a sense of good-weird unpredictability. Two thirds of the way in to this strange, captivating noir, it’s impossible to say where it’s heading. If the same could be said for other crime dramas, we wouldn’t be so greatly in need of Top Of The Lake.