The Strain season 4 episode 5 review: Belly Of The Beast 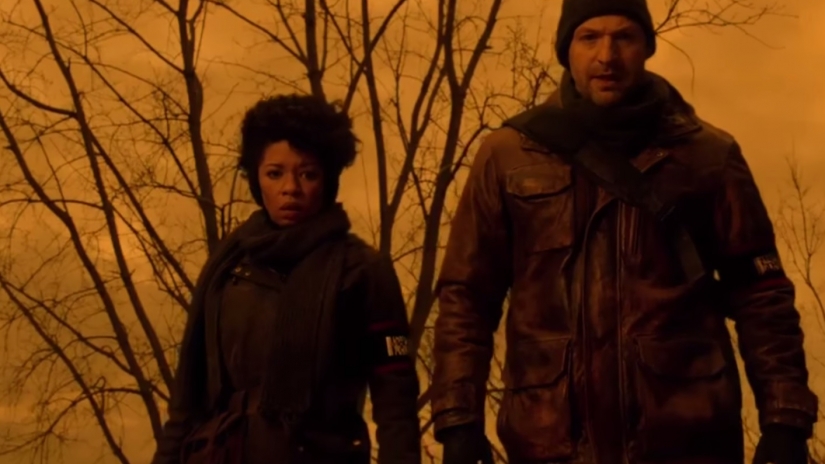 Now that the end of The Strain is in sight (five more episodes after this week, I believe), can we just all start begging FX for a Quinlan prequel series? I mean, who wouldn’t watch a series about an immoral, daywalking, altruistic vampire with an Uzi and a bone sword? This week, we get to see what a potential Quinlan spin-off would look like as the episode flashes back to Victorian England and focuses on Quinlan’s past.

In the present, Quinlan and Fet are still trying to secure the parts needed for their own nuclear device (try North Korea fellas, jeez Louise). This hunt for the explosive McGuffin allows the episode to flash back to what life was like for Quinlan during the Victorian era, because really, it’s a rule in the Constitution or something that all vampires must at some point have a storyline take place in Victorian England. All jokes aside, the setting is lush, the set design is downright gorgeous, and Quinlan’s tale is heartbreaking as he saves a young girl from some miscreants. It turns out, the young girl has a brother dying of syphilis as The Strain wins the Emmy for best and most disgusting usage of an STD in 2017. The woman and the vampire bond and she helps transform Quinlan from the strigoi-looking monstrosity that he is into a Victorian gentlemen as Rupert Penry-Jones finally gets to rock his chiselled good looks without the layers of awesome Quinlan makeup. We all know that the flashbacks are always the best part of The Strain and this voyage into an unseen chapter of Quinlan’s past is no exception.

While we get velvet, walking sticks, and sex pox in the past, in the future, Quinlan and company go on a gripping and action-packed chase to obtain the aforementioned nuclear device. This week’s episode hits us with a solid action set piece that sees Quinlan battling a strigoi Mongrel on top of a semi. It’s all pretty damn awesome and the leather clad, Cenobite-esque Mongrels certainly fit The Strain‘s Guillermo Del Toro aesthetic. Thanks to Quinlan’s swordplay and agility, Fet and company obtain the nuke which is certainly a well-needed win for our group of heroes.

Speaking of our heroes, Alex and Eph continue to try to find a way to take it to the strigoi. They find themselves in suburban Philadelphia where things certainly take a surreal turn for the horrific. Eph and Alex discover what the strigoi partnership have been doing with the humans that have been willing to relocate to the country. In fact, we’ve already seen something like it in Setrakian’s flashbacks as the strigoi have built food-processing concentration camps across the US. Eph and Alex stumble across one of these kill centres this week, and the episode humanises the horror through the use of a young girl that Alex and Eph get to know through a video blog found of a discarded smart phone. Through the voyeuristic experience of this little girl’s story, the horror of the strigoi’s plan is humanised. The design of the strigoi death camp mirrors famous photographs of Auschwitz and other Nazi hells as The Strain continues to combine real world atrocity with its own narrative. See guys, remember- Nazis are bad, and I wish that little warning was apropos of nothing, but you know, turn on the news.

And here’s where I want to hit you with a few jokes and pithy pop culture references because things are getting bleak up in here, but The Strain just keeps bringing the intensity. Which brings us to Dutch Vanders. Last week, Dutch rebelled against her strigoi captures when she witnessed her friend have her new-born baby brutally ripped away after a C-section. Dutch just could not stand the brutality and grabbed that Judas summabitch Desai and attempted an escape. She was surrounded by strigoi and we were left with a killer cliffhanger. This week, we learn that Dutch was taken captive and brought to Eichhorst. If you’ll recall, Eichhorst knows Dutch very well as the brilliant and brave young woman was once Eichhorst’s captive (never forget the pineapple). This week, Eichhorst questions Dutch about the whereabouts of Setrakian and through intense interrogation of Dutch, finds out that his mortal enemy is being experimented on the very same facility Dutch is being held.

Now, how freakin’ tragic is it that Setrakian, one hundred year old ex-concentration camp survivor, has lived so long, has fought so long, just to be back in Eichhorst’s clutches? Being sliced open for his bone marrow? Damn, that’s just brutal. See, I told you things stay bleak.

Or do they? Because once Dutch discovers Setrakian is held in the same location, she stages an escape. Because that’s what Dutch does. She escapes. And by God (Jim Ross voice), she does some damage in her attempt. She confronts Eichhorst. The Nazi (and remember, Nazis are bad) seems to have the upper hand, until Dutch burns the shit out of his Third Reich ass (speaking of which, if Marvel ever needs new Red Skull, how perfect would Richard Sammel be?). Dutch escapes with Setrakian and finally, we get a glimmer of hope.

Fet and Quinlan have the bomb, Alex and Eph have discovered the secret of the strigoi death camps, Dutch and Setrakian are reunited, and Eichhorst will have to nurse some pretty brutal burns. It seems like the tide might have turned for humanity this week, and hey, we didn’t even have to endure any Zach, so win-win on a powerful episode of The Strain.