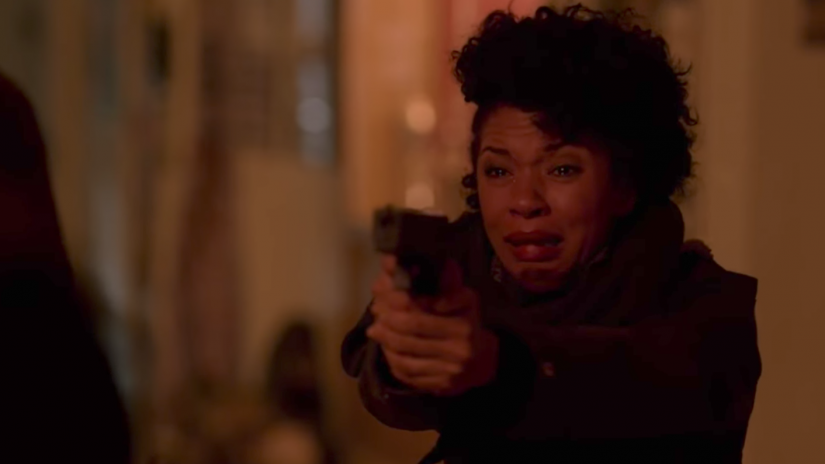 This week’s episode of The Strain features three separate struggles that are quite gripping and continue to escalate the battle against the strigoi dystopia that has defined this final season.

Two weeks back, the always brave and capable Dutch Vanders was caught trying to free one of her friends from the baby factory she was imprisoned in. In that episode, it seemed like Dutch was caught and was going to become the main course of a strigoi banquet. Thankfully, the strigoi, specifically human traitor Sanjay Desai, saw a use for Dutch as a strigoi operative within the breeding factory designed to gain the trust of the female chattel held by the vamps. This week, Dutch has to comfort a mother during a difficult birthing and has to witness the babe snatched from its mother’s arms to become an important blood bag in the strigoi plan to continue to breed a sustainable blood supply.

So let’s unpack that. The strigoi needs Dutch to comfort mothers through birth so the vamps can then take the baby and either turn it into a breeder for future generations of leeches or feed on the newborn. Yeeeesh.

Of course after the birth, Dutch rebels (because that’s what Dutch always does) and tries to once again escape. She manages to take Desai hostage, but the episode ends with Dutch surrounded by strigoi heavies. Guys, this is the last season of The Strain. Anything goes, and Dutch and her moral heart are in deep shit in that blood factory. But how can a human mind process the forced birthing of babies to feed an industrialised vampire society? Of course Dutch snapped! It seems like every episode that features Dutch ends with, “How the heck is she going to get out of this one?” cliffhanger, but this week’s ending really took the blood cake. And can we talk about the design aesthetic of the strigoi blood factory? Between the hooks, and the medical horrors, and the veal-like human cages, the factory would make Clive Barker poop his pin pants. This is all some truly effective horror and one of the major reasons we will miss The Strain when we are forced to say goodbye to the brutal show at the end of this season and dammit, once again I am left dying to know what happens to Dutch.

It looks like Dutch’s fate is in the hands of aforementioned Judas Desai who also gets some spotlight this week. We meet Desai’s suffering wife and get a little taste of what life is like as a loyalist to the strigoi. Desai gets to eat in fine restaurants (no protein bars for this traitorous d-bag) and lives in comfort, but that doesn’t stop Eichhorst from showing up and demanding decreased production of newborns in the birth farm that Desai runs. Desai might be the tertiary villain of the series, but he is in just as much danger as Dutch and our other heroes.

Speaking of our other heroes, Eph and his new friend and fellow insurgent Alex start in a good place this week, all comfy and eating eggs while planning their next raid on the strigoi. Until the vamps show up that is and cut through Eph and Alex’s crew. Eph and Alex are now on their own and share quite a moving movement where Eph confesses that it was his son Zach that caused the nuclear nightmare they are currently living in. With all the madness with Dutch and the frenetic Gus story line that we’ll discuss in a sec, Alex and Eph’s moment of trust was really a well needed quiet character beat that strengthened the bond between two characters that were kind of thrust together three episodes ago. Alex did not shun Eph even though Eph’s kid set off a freakin’ nuke, and now that this trust is in place, Eph and Alex could become a force that might very well turn the tide against the strigoi. And let’s not forget, after Eph and Alex’s actions last week, Eichhorst is still on his way to take down this insurgency. Alex and Eph will need that trust to take down that undead Ratzi bastard.

Okay, so let’s talk Gus. Eph and Alex must deal with the ongoing and, at times, futile war with the strigoi, but Gus and company are locked in a much more human conflict. Gus, his cousin Raul, and gang banger Alfonzo Creem are running a black market until some heavies kill one of their crew and take their goods. Gus ain’t having it, and tracks the new heavies back to their lair. It turns out this new rival gang is made up of former corrupt members of the NYPD and uh-oh. This allows the viewer to experience a serious conflict and contrast between Gus and Creem as Creem wants to run in guns-a-blazing while Gus, the seasoned strigoi killing campaigner, comes up with a more subtle plan. A badass firefight between Gus’s crew and the shitbag former cops ensues and Creem steps up and ends it after he finds a big honking machine gun that would have been right at home under Frank Castle’s Christmas tree. Creem won the day, but Gus got the huzzahs from the gang which could set up some drama later because Creem doesn’t seem like the most sensible of lads.

No Fet or Setrakian this week, but this week’s episode really plugs along and gave us some memorable horror and some epic battles. I’m on tenterhooks waiting to see how Dutch is going to escape this one as The Strain continues to deliver the effective horror, gore, and action.

Read Marc’s review of the previous episode, One Shot, here.