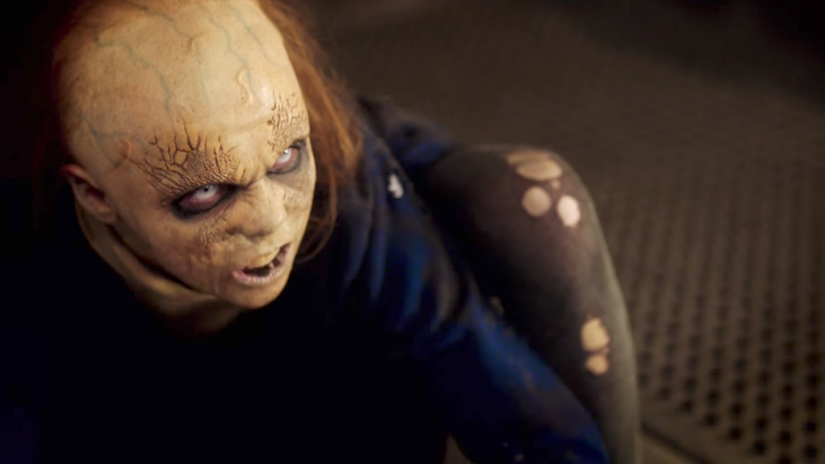 Teenage love, nuclear war, and rat poison all come together as humanity fights back this week on The Strain…

This review of The Strain contains spoilers.

See related
Revisiting the film of Stephen King's It

Well, I never really wanted to watch a petulant, genocide-causing teenager mack it to a young girl, but that’s exactly what I had to endure on this week’s episode of The Strain.

That’s right, little Zack Goodweather has been hit with Cupid’s arrow and has fallen for a young lady conscripted to be his maid. Poor little Abby must not only clean up Zach’s pizza crusts and skid-marked underwear, she must also deal with his clumsy come ons.

Poor Abby is not aware that Zach blew up New York City and plunged the world into thermonuclear war and a subsequent nuclear winter, but she still has to deal with the fact that Zach, history’s most prolific murderer, has a thing for her. Granted, Zach is helping young Abby by giving her food for the other kids she cares for and also takes her on private tours of the Museum of Natural History, so Abby is benefiting from this painfully awkward friendship. But, there’s no hiding from the irony that Zach is the one who pressed the detonator that killed Abby’s parents and when she finds out about that little bit of business, things are going to get ugly.

The question remains; is Abby the key to Zach’s redemption? Will The Master lose Zach’s loyalty if and when he threatens Abby (and you know that bit of angst is coming)? After the tiger shooting two episodes back, it is very clear that The Master is attempting to strip Zach of humanity. What better way to do this then to force Zach into murdering the girl he now has a hardcore crush on. Can Zach be redeemed after, you know, selfishly ending human civilization? I really don’t think so. Even if Zach steps up, grows a pair, and stands up for Abby, that really can’t balance out wiping out humanity like a picture on an Etch-a-Sketch.

As for Zach’s father, Eph and his new friend Alex are taking the fight to the strigoi. This week In Philadelphia, Eph, Alex, and their band of insurgents successfully taint a blood tanker and poison over two thousand strigoi.

It is cathartic to finally see our heroes win one, as we just had to endure two weeks of sheer nihilistic hopelessness as Eph, Setrakian, Dutch, Fet, and Gus just keep taking it to the chin in this new dystopia. Hold your celebration, though, as Eph’s act of rebellion may have killed a shed-load of strigoi foot soldiers (and worms), but the poisoning also alerted The Master to Eph’s whereabouts. Now, Eph and Alex will have to deal with the soon-to-arrive Eichhorst, who will be more than happy to murder death kill any of Setrakian’s followers.

Since Setrakian is absent this week, sadly we must wait to see what’s become of Dutch. But we do get to witness Fet and Quinlan’s search for a nuclear warhead. Joined by Fet’s new love, the kickass sharpshooter Charlotte, Fet and Quinlan actually find and gain possession of the missile. Sadly, Fet and company has to kill an American soldier guarding the weapon, and there seems to be a growing rift between Fet and Quinlan as the daywalking strigoi dispatches the soldier with no remorse. It seems that to defeat the strigoi, Fet might have to lose his humanity.

Fet has long been the most human character on The Strain, and it’s sad to watch him have to kill his fellow humans in order to exterminate the strigoi infestation that has wormed its way into the world. Thankfully, Charlotte keeps Fet grounded and on mission or else the loyal exterminator would be in danger of becoming a cold killing machine like Quinlan. As for Quinlan himself, the vampire continues to define awesomeness and I’m kind of shocked you don’t see more Quinlan cosplay. There’s not many quality characters for us bald dudes to dress up as.

Quinlan, Fet, and company celebrate a minor victory this week as they indeed secure the nuclear weapon. Unfortunately, the weapon is missing a vital component and now our heroes will have to take the fight with the strigoi to complete their mission and finish the weapon. So we have a nuclear McGuffin as Fet will have to plan a raid on the strigoi, a raid that might expose him and his crew in the same way the Eph was exposed.

As I said, no Dutch, Gus, Setrakian this week, but I guess we have some powerful stuff coming with Setrakian as he is now being held in a strigoi prison camp. This will, no doubt, bring back memories of his time is a Nazi concentration camp under Eichhorst, and one has to wonder if the ever weakening Setrakian can survive being locked away once again. We will have to wait to find out, as even though Eph and Fet provide a ray of hope this week, things are getting bleaker and bleaker as the final season of The Strain continues to unfold.