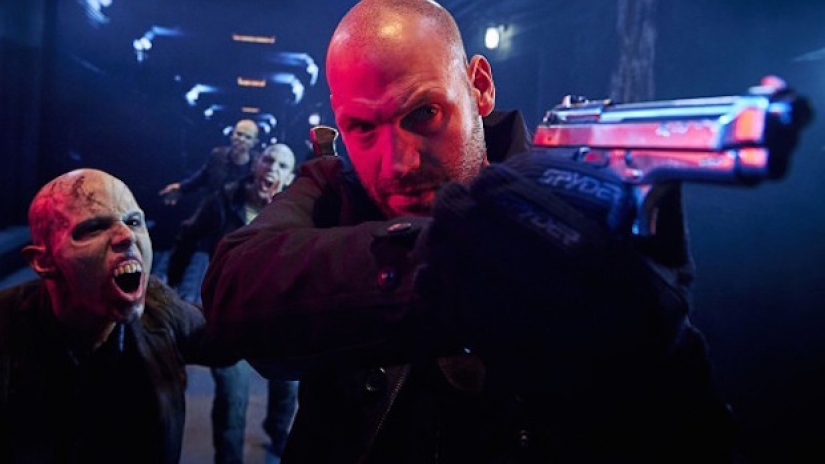 When The Strain hit its cliffhanger finish last season, we were left wondering: what’s next? When ‘lil Zach Goodweather pressed the detonator of a nuclear device and blew up New York City, fans were left in a whole new world where The Strain would no longer be about preventing the apocalypse, it would now be about surviving the apocalypse.

And that’s exactly where we pick things up, in a whole new world where the strigoi rule the United States, where humans exist as a feeder class, and where propaganda and desperation are the order of the day as The Strain has gone from a survival horror series to a dystopian survival series and the genre refresh has put a new coat of paint on a series that began spinning its wheels last season. Now, we get to see what the strigoi’s plans were and the results are nightmarish.

It’s a world where certain blood types are culled to maintain societal equilibrium in order to feed the strigoi masters. It’s a world where resistance and rebellion are drowned out by ennui and chilling acceptance. It’s a world where medicine and food are scarce, where lemming-like resignation towards the inevitable is commonplace, and where the strigoi openly patrol the streets during the day thanks to the cover of a nuclear cloud provided by petulant little Zach.

But there’s a glimmer of hope. We don’t get to see much of what remains of New York, but we do get to see Philadelphia as Ephraim Goodweather has become something of a wandering medic who exchanges his services for rare goods like food and booze (and we’ll all remember how Eph likes his booze). Eph is in this weird state of being a reluctant hero while trying to survive. He has none of his usual crutches like the need to save his son, the need to help his friends, or his toxic relationship with Dutch, but he still manages to help people. This week, Eph helps a woman with scurvy and another hapless fellow who gets injured in an insurgent attack on the strigoi. Eph has heroism engrained in his DNA and he just can’t resist helping others even if it gets him into no end of trouble.

It’s interesting to see Eph run solo because so much of his character has been wrapped up in his friends and family. From his desperate need to save his son to his conflict with his strigoi wife to on-again off-again romances, Eph has been colored by his interactions with others. Now that he’s alone, it’s kind of cool seeing Eph as a heroic lone gunman doctor for hire type.

We do get to see Zach this week as the boy who destroyed New York is now living under guard of the Master. Zach’s bedroom looks like a twisted version of Ricky Schroder’s room in Silver Spoons (dated reference #1). Zach is under constant guard by his little chittering Feeler. It seems that the Master wants to soon leave the body of Eldritch Palmer and enter the body of Zach, much to the ever-present Eichhorst’s consternation, but in the meantime, Zach is confined to his room playing Guitar Hero and acting all snotty.

The Master does take Zach out for a little test as Zach is taken to an abandoned zoo to shoot a tiger (is that a veiled shot at The Walking Dead, I kinda feel it is) to show that Zach has become a stone cold killer (he killed New York, duh), and is becoming the perfect vessel for the Master. There is a little humanity left in Zach though as it seems as the boy has developed a crush on a young maid forced to clean up Zach’s disgust-itude. I have to say that Jonathan Hyde just nails it as Palmer Master channelling a nice degree of Klaus Kinski to give the Master a nice smarmy regality.

Characters like Gus, Setrakian, and the aforementioned Dutch are all absent (though Setrakian does appear in a dream sequence), but we do catch up with Vasiliy Fet as the Russian extermination has set up shop in North Dakota. Fet is looking for a nuclear weapon of his own to use against the strigoi and has shacked up with a tough-as-nails woman named Charlotte. As luck would have it, Fet runs into a soldier that used to work in a North Dakota missile silo, and we are off on a quest to nuke the strigoi. Listen, Fet is the heart of this show. He’s the Daryl Dixon of The Strain world and he is just is a blast to watch. Having the ultimate exterminator looking for the ultimate rattrap of a nuclear weapon to use against a vampire infestation of New York is freaking brilliant.

Having the series take a dystopian twist out of the confines of NYC really expands the scope of the series. We are now watching a dystopian reality, and yeah, the politics are really heavy handed but corruption and the price of blinding following one’s leaders has long been a theme of the series. Things have come full circle now. Some of the strongest moments of The Strain have long been the flashbacks to Setrakian’s past living under and fighting the Third Reich. Now, Eph and Fet are living in similar conditions that Setrakian resisted so long ago. Now it is Eph and Fet that must fight back against the reign of the vampire as they must become modern day Setrakians to defeat the Master and free the nation from being the food supply of the strigoi.

This episode was a place-setter featuring the new lives of Eph, Fet, and Zach in edition to setting up future conflicts between the Master and Eichhorst, but most importantly, the season four premiere of The Strain brought the gore and awesome monster designs that have become the show’s signature. From hunter killer strigoi on leashes to vampire Stormtroopers, the series continues the undead Nazi aesthetic that set it apart from any other vampire television drama. And oh, how can I forget Quinlan, everyone’s fave day-walking heroic vampire? Quinlan has joined with Fet and is kicking all sorts of ass in North Dakota as he and his new companions try to find the strigoi-busting nuke and save humanity.

Bright red buckets of gore, vampire versus vampire action, Nazi vamps, and petulant genocide-causing children. Yeah baby, The Strain is back on one wild and very dystopian ride and it will be fun to watch all the grue unfold in season four.