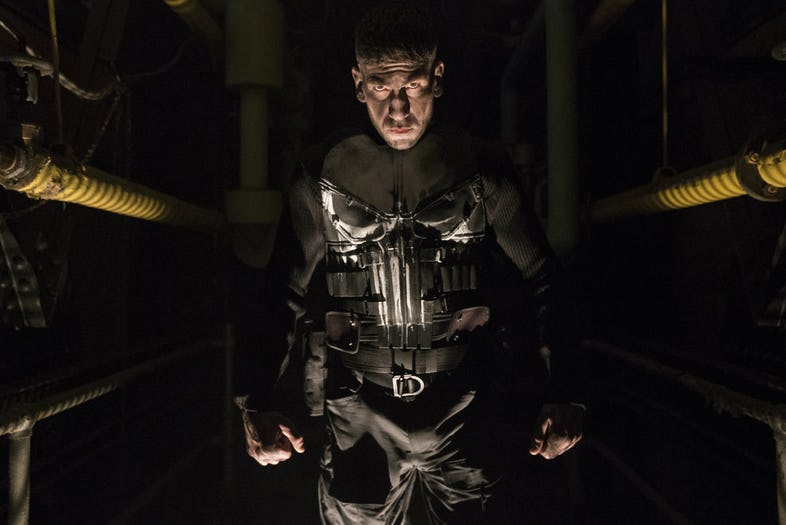 The Punisher is here! And so is the first of our daily episode reviews feat. nerdy spots and MCU/comics references…

Following a stand-out performance in the Marvel/Netflix Daredevil show, Jon Bernthal is back as Frank Castle, aka The Punisher. But here’s a good question: how does a company that lives off its brand of superheroic ideals as the paragon of achievable virtue deal with a character whose brand is all about using guns and extreme violence to solve what are, broadly, social issues. I guess we’re going to find out.

It’s fair to say this episode eases us back into the Punisher’s mentality, as well as refreshing us on his backstory. Neither is especially pretty. Frank is portrayed as a PTSD sufferer whose traumatic episodes are kept away largely by dishing out extreme violence on people who (at least by his standards) deserve it. This, to be fair, is a more sensitive take on the character than most versions, where he’s played as a straight up psychotic serial killer who you can broadly root for because of his moral code.

Of course, he does still murder a lot of people in this episode, though it’s exclusively people who are either about to kill someone else, or planning to. I wonder if that’s how they’re going to play it – the moment you attempt to take a life, you forfeit the right to your own? It’s hard to make the Punisher seem reasonable, but that could be one way of doing it…

There’s also a new supporting cast introduced. Dinah and Sam, a pair of homeland security agents who are attempting to dig into Frank’s past (even though they think he’s dead). Curtis, a support-group leader who Frank trusts. And, weirdly, Dinah’s mother, a psychiatrist who I suspect will be digging into Frank as the series progresses.

As starts go, it’s a slowish one, but the tone is strong and consistent, and care is being taken to make Frank seem authentic. They could’ve just had this entire series be guns blazing, but aside from an opening montage Frank is fairly restrained, and that makes the violence have some element of satisfaction. I do sort of struggle with the idea that this guy is in any way possible to root for even if his methods are depicted as effective and precise, so I’m interested to see if the series challenges that as it goes on – at the very least, when Frank shoots a guy in the head, it doesn’t play it off as a moment of weakness or failure, so the show might just be trying to have its cake and eat it… It probably goes without saying that Marvel Universe references are thin on the ground even in this first episode, and maybe without the Defenders to tie into things will stay that way. Lord knows the tone of this series is not going to benefit at all from someone reminding you that aliens once invaded and there’s a Magician living on Bleecker Street.

Broadly it’s not cribbing a lot from the comics either, but there are a few Easter Eggs worth noting from both print and screen.

The Punisher (aka Frank Castle) was created by Gerry Conway, John Romita Sr. and Ross Andru. He first appeared (as a villain, no less) in Amazing Spider-Man #129 (1974). The MCU version, as played by Jon Bernthal, first appeared in Daredevil 2.01: Bang.

The bikers Frank kills in the opening sequence are members of the Dogs of Hell. They’ve appeared multiple times in previous MCU series, most notably Daredevil but also Agents Of SHIELD.

The backstory about Schoonover was previously seen in Daredevil Season 2, but it forms a fairly major part of his arc so I’m not going to repeat it all here. Suffice to say, they were left thinking both Schoonover and Frank were dead, though the latter was definitely not.

Micro, the guy at the end, is a comics character but I’ll talk about him more later so we don’t spoil future episodes. You may remember that at the end of Daredevil Season 2, Frank retrieved a disc from his house which was labelled “Micro”. You can bet that’ll matter later on.

And, finally, the words Micro speaks – “Welcome back, Frank” – are the title of one of the Punisher’s most famous comic arcs, written by Garth Ennis and drawn by Steve Dillon. This is also the source of Gnucci crime family, at least one member of whom also appears in this episode. If that’s the season arc they’re doing, I’m likely to be quite happy with that, but at this point it might just be a throwaway reference.