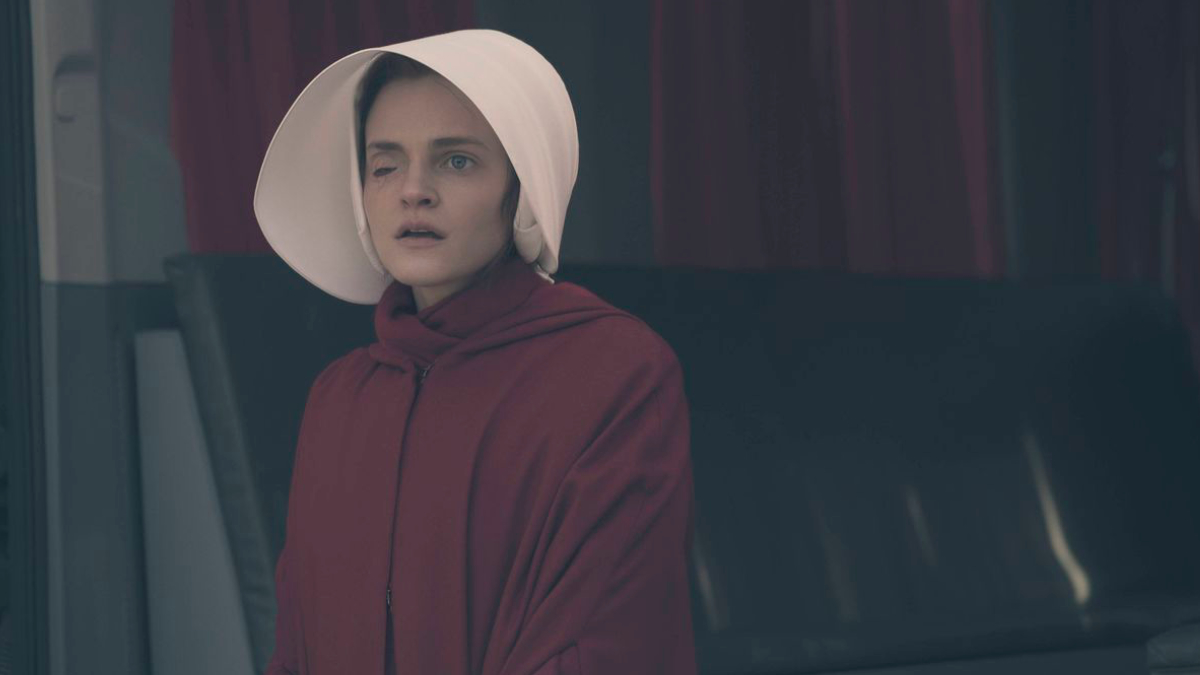 It’s rare for anybody in Gilead to say what they mean. In public, communication is reduced to a set of empty mottos swapped like tokens, merging individual voices into one homogenous, docile hum.

Privacy offers no freedom either. The republic’s eyes and ears are in people’s homes. There too, real meaning is camouflaged under pretence. Serena Joy can’t tell Rita she’s looking for a stiff drink instead of chamomile tea. Rita can’t pour her one without first offering a euphemistic excuse.

To know the characters’ real feelings, The Handmaid’s Tale audience has to be alert to the artifice and hear what’s being said behind each line. We need to know that when Nick warns the Commander to be careful at Jezebels, he’s really warning Offred. Or that when Offred says “thank you, Fred” for having Moira delivered to the hotel room, she’s really saying ‘fuck you, Fred’.

Elisabeth Moss makes our job easy. Her performance is so detailed, we can read what she means regardless of what she says. Even without a voiceover, Moss makes her character as easily understood as a Shakespearean soliloquist confiding their secrets in the audience when the other characters’ backs are turned. We know just when she’s lying and just when she’s telling the truth. Usually.

Was it a lie Offred told Janine on that bridge about everything going back to normal one day, or does she really believe that change is coming? If it was the truth, that fits with her deciding to risk her life for Mayday and urging Moira not to give up the fight. If it was a lie, it was the kindest of many Janine was told in episode nine.

The Bridge opened with one of Gilead’s numerous ceremonies (from forcibly impregnating women to tearing their children from their breast, handily, there’s one for every occasion). It was established last week that the ceremonies are just inventions to give barbaric practices the sheen of pious respectability and placate the participants in this cowardly system. That lie was followed by another from Commander Warren, whose “we will cherish this child always” to Janine was spoken to her like a secret code.  She thought the “we” meant him and her.

Madeline Brewer has been excellent as Janine throughout the series, but particularly so in this episode. She’s conveyed how disturbed her character is without overplaying it, and made Janine a dangerously unpredictable, and thus thrilling, presence in such a regimented world. Whenever Brewer’s on screen, you’re gripped because unlike the rest of the Handmaids’ careful, measured behaviour, you don’t know what she’ll do, and you worry for her.

In a world of sad stories—Rita losing son Matthew, June being separated from Hannah—Janine’s might be been the saddest. She was a rape survivor before Gilead forced her to go pro with it. Because she’s been so deeply hurt by this world and the one before it, Janine lacks the self-preservational control of the other Handmaids, so seems more alive than the others. Her face is more animated than theirs, and her voice less even. Everything about her, from her pitiable childishness to her moments of lucid, justified anger, has been painfully compelling. It didn’t feel possible for this show to up the dread levels any higher, but by standing Brewer and baby on that bridge, it managed it.

Aunt Lydia (the terrific Ann Dowd – this series has an embarrassment of strong performances) and Janine’s relationship is part of the character’s attraction. Despite being the one who took her eye, Lydia also seems to feel deeply for her charge and treats her with maternal affection. Is it a genuine attachment, or because Janine is the real deal – a functioning Handmaid model? Did Aunt Lydia’s cry of anguish when Janine stepped off the bridge express pain at losing a loved one or pain at the waste of a working womb?

Janine’s attempt to escape may have failed, but will Moira’s work? Between that and Offred’s mission, The Bridge  was this show’s most thriller-ish episode yet, accelerating the plot in time for next week’s finale. What’s inside the package? What fate will Putnam—and by extension Waterford if his own infidelity is revealed—face from the Sons of Jacob?

All questions to be answered next episode. Praise be for the early season two commission, I’m not ready to leave this gripping series yet.