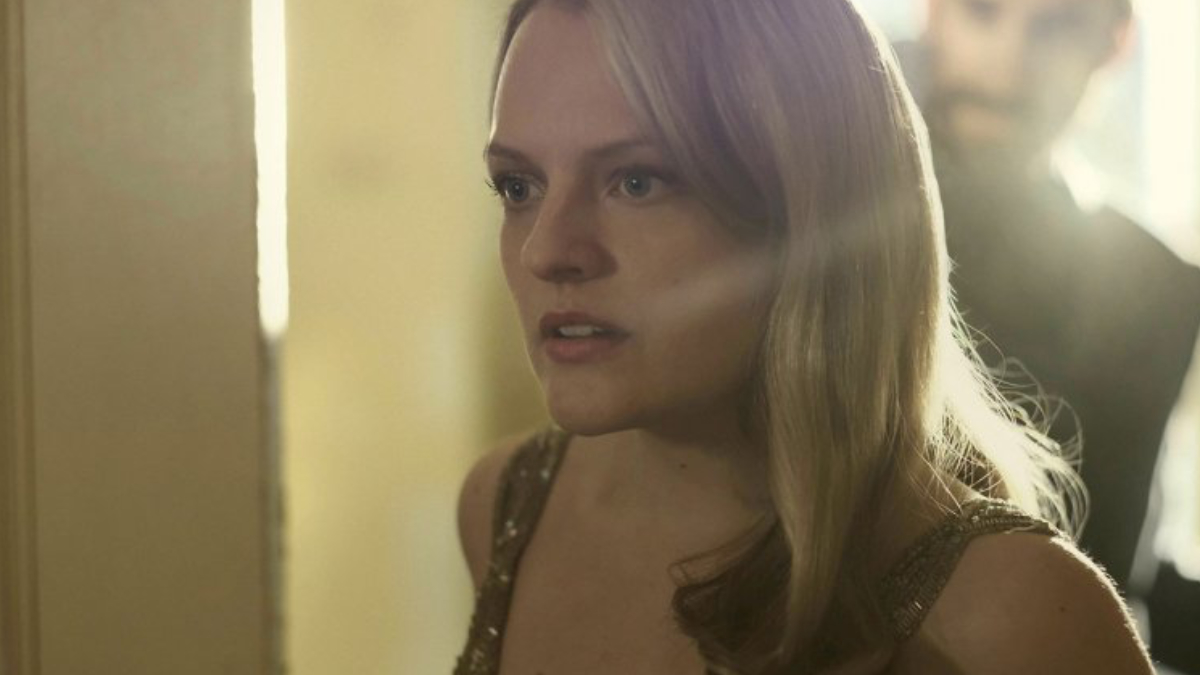 It’s a lie. The whole thing. The Commanders no more believe in Gilead’s tenets and rites than they believe in liberty and justice for all. They’re power-grabbing hypocrites operating under cover of scripture. They know full well they’re not making the world better, only better for them. They’re bigoted charlatans, rapists and murderers.

Worse than that, they’re ad men.

They’ve needed to be, to sell Gilead. ‘The Ceremony’ (“act may not be the best name, from a branding perspective”), to which we were horrifyingly introduced in episode one as a sacred fulcrum of the new world, turns out to have been cooked up in twenty seconds by a bunch of dudes in the back of a limo. It was a way to keep their wives on board while they kept their dicks wet and kept their family lines going. It’s all a lie.

Episode eight exposed that lie grippingly by taking us out of the muted palette of the Waterford home and into a Gilead brothel, and Nick’s past. A laid-off steelworker from Michigan, Nick didn’t sign up to be an Eye for ideological reasons, we learn, he just needed a job. The soon-to-be Commander Pryce, a zealot with dreams of cleaning up the country, recruited him for the Sons of Jacob and hired Nick as Waterford’s driver, hence our being privy to the corrupt world-shaping taking place in the back of his car.

Nick’s real job, we also learn, is to inform on his Commander. Pryce is spearheading a purge of the upper echelons that could send Waterford to the Wall should his transgressions be discovered. What has Nick already told Pryce about his boss? Are the Commander’s days numbered?

Because if Jezebels made anything else clear, it’s that Fred Waterford’s transgressions extend far beyond games of Scrabble and crinkled copies of glossy magazines. He not only sleeps with his Handmaids, but is a regular visitor to a Boston brothel where the Commanders house a “collection” of women who failed to assimilate but are still deemed fuckable. For the time being at least. As Moira (alive, the second such surprise for June in as many weeks) says cynically, “there’s a few good years until your pussy wears out.”

‘Jezebels’ is your common or garden den of iniquity. Booze, drugs, racy outfits, kinkiness… it’s non-consensual 1930s Berlin without the queer sex, and as visually opposite to Gilead as you could imagine. After some initial reeling, June sees it for exactly what it is. “You look like the whore of Babylon” Moira tells her. “Isn’t that the point?” she replies.

The point is that the Commanders want it both ways with their Handmaids – creepy nun in the streets and freak in the sheets. They’re all at it, not just Janine’s master, or Commander Guthrie. They all perform their solemn role at the monthly Ceremony and then demand something on the side out of sight of their Wives. Lord, that hotel room scene was brilliantly performed, horrible to watch and perhaps this series’ most excruciating yet.

Out of sight of their wives perhaps, but what chance is there that Serena Joy and the others don’t know what’s going on while they’re not looking? What else explains Serena Joy’s bitter “what did you expect?” as the corpse of their latest Handmaid was carried out of the house? Or for that matter, the impromptu gift she gave to Offred? Obvious symbolism aside (Elisabeth Moss’ old show Mad Men would have trusted the viewers to grasp the girl-in-a-box significance without explaining it in VO. A little more faith in us would be nice), was that music box intended as an apology of sorts for whatever went on in her absence?

What went on in Serena Joy’s absence was yet another scene from a horror movie. As Waterford shaved Offred’s legs (her horrified realisation: “He’s good at this. He’s done it before”), dressed her up like a doll and watched her apply make-up, down to his unshakeable confidence that she was having the time of her life, he seemed every inch the serial killer.

That’s just what he is, of course. All those men in charge are. By blowing apart the lie of Gilead and revealing the fractures between its rulers though, this episode made Fred Waterford into something thrilling: vulnerable. This game-changing episode left us with the question of what is more dangerous – the true fundamentalist (Pryce) or the rule-breaking hypocrite (Waterford). Is it better the devil Offred knows?