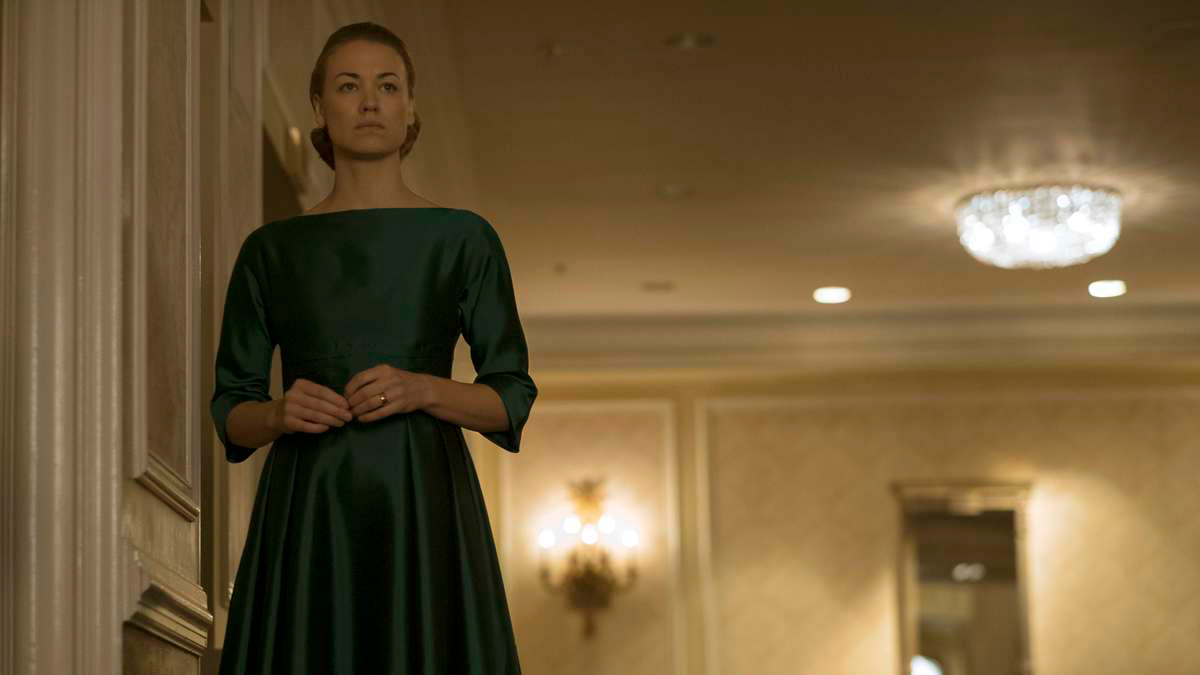 The Handmaid’s Tale diverges from its source material by delving intriguingly into the world outside Gilead, and Serena Joy’s past…

Like a non-white BNP member or a Tory nurse, the women in The Handmaid’s Tale who support and enforce the Republic of Gilead are a bewildering contradiction. Who are these turkeys voting for Christmas? How do they feel about the society they’ve helped to create? The Commander explained his odious ‘make the world better’ philosophy last week; now it’s time to hear from the quiet half of the room.

Serena Joy never used to be quiet. Before Gilead, she was a writer and activist. She wrote books and addressed crowds. Standing on the shoulders of feminists who’d fought to allow her an education and a voice, she used both to silence women and collude in a system that abuses and dehumanises them. Gender treachery’s a crime alright, Gilead’s definition is just way off the mark.

Yvonne Strahovski did good work this week letting us peer behind Serena Joy’s mask. She’s still a riddle wrapped in an enigma inside a modest green dress, but we learned a few things.

Like Commander Waterford, Serena Joy is a religious fundamentalist and a terrorist. In the early days, she was one of the brains of the operation. She came up with the idea of fertility as a national resource and reproduction as a moral imperative. Her treatise on ‘domestic feminism’ (sample quote “don’t mistake a woman’s meekness for weakness”) paved the way for the wider acceptance of Gilead’s ethos. She whipped gullible crowds up into a frenzy and used her rhetoric to sell this horror show to the people.

And the thanks she gets? Having the doors of power slammed in her face and being cut out of the details of Mexico’s trade visit, left just to figuratively arrange the flowers and serve the hors d’oeuvres. You could almost laugh, if only there were something funny about it.

‘Are you pleased with yourself?’ Ambassador Castillo more or less asked her in one of the episode’s strongest scenes. Having written a book that helped to forge a society where women aren’t allowed to read it, or indeed, anything, is Serena Joy proud?

If Gilead is what she had in mind, she should be. It is, after all, flourishing. A completely organic agricultural model, slashed carbon emissions, a hefty orange harvest, women happily ensconced in their sacred positions… and children. If a town the size of Boston hasn’t seen a live birth in six years, then Gilead, with its gaggle of little ones, must be blessed indeed. The Lord has truly opened.

That’s the sales pitch, at least. That’s what the Mexican delegation wanted to hear before they agreed to trade with this new Republic. To assuage their guilt about financially shoring up this questionable regime, they came to check that everybody was happy with the new set-up. They were so keen to know the truth that they asked Offred if all was good in the ‘hood in front of her captors. Through the most gritted of gritted teeth, in yet another excellent moment from Elisabeth Moss, Offred told them she had found happiness.

Later, she told them she was a kidnap and rape victim whose daughter had been taken from her, and if you try to run, they maim you. Help me, she begged.

They didn’t help her. They knew that the deal they were making was with the devil, they just didn’t want to have to think about it. The same way none of us want to think about any of our comforts or necessities being the fruit of anybody’s suffering. In your fridge, in your pocket, in your coffee machine, probably, there are products of unjust systems. Our government sells arms to regimes not unlike Gilead in their treatment of women. We do the deal and turn a blind eye.

Mexico turns a blind eye because it needs what Gilead is selling – fertile women, red tags. The latest wheeze of this corrupt political structure? Reinstating the slave trade.

Straying the furthest any episode has yet from Margaret Atwood’s source material, A Woman’s Place also did more than any other to scaffold this show’s future. Not only was the outside world satisfyingly brought in, but we also saw through a viewpoint other than Offred’s for the first time. That opens up countless narrative possibilities – could we also hear Aunt Lydia’s story? Rita’s? Nick’s?

Crucially for Offred, we learned too that Luke was alive. That nugget gives our heroine a goal other than merely to survive. Gilead isn’t as strong on the international stage as it pretends to be. Six months more of sanctions and it could collapse. There are sympathetic parties outside. There’s a resistance movement inside. It’s been three years, but might there be hope yet?