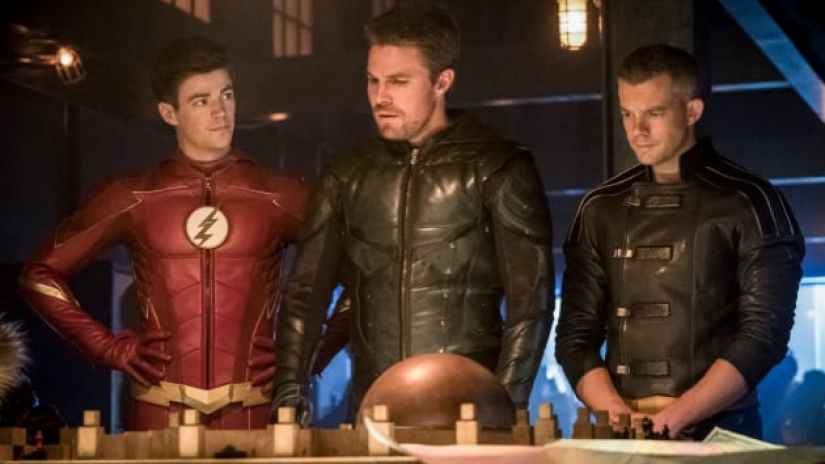 Crisis on Earth X continues with its best chapter yet on The Flash! Spoilers ahead in our review…

So, I have to give it up for Delia Harrington, who reviewed the first two chapters of Crisis On Earth-X for us (after all, Supergirl and Arrow are her beat these days). I tend to get caught up in the moment with these big superhero crossover episodes, and I find them a little harder to judge/review than your average weekly instalment of DC TV. And the first two chapters of this crossover were so fun, so packed with the spirit of DC Comics, and so full of cathartic Nazi fighting that it’s harder for me to be objective.

But Delia raised some good points that should still be carried over into tonight’s chapter of the crossover on The Flash. Chief among these is that “mirror universe Nazis” don’t make for the most nuanced of villains, and when you’re using concentration camp imagery, well, you’d better make sure you’re not being exploitative. I do think that maybe the whole Earth-X thing could have benefitted from some teasing set up early on, although I don’t think we were ever going to get as layered a portrayal as we see on The Man In The High Castle from these shows. And as much fun as those first two chapters were, there was a fair amount of handwaving to get everyone together, into the action, and then a whole lot of clunky expository dialogue.

But we’re here now, and with all that out of the way, Crisis on Earth-X just completely embraces its lunacy in ways that I don’t even think those first two chapters dreamed of. And if it was all just fist-pumping Nazi ass-kicking and “boy aren’t Nazis just the dumbest bunch of asswipes in any reality” spots, I’d probably still be happy with that. But when you give Wentworth Miller his best entrance in a history of great entrances and somehow make Len Snart even cooler than he already was, well, yeah… good bye objectivity. With Miller recently making noises that this is likely his last time as Captain Cold (or “Citizen Cold” as his more heroic version is known), this performance is here just to remind everyone why we love him so much in the first place. Just a reminder: the first truly capital letters GREAT episode of The Flash was when Captain Cold debuted. That turned out to be no accident.

Moving almost all the action to Earth-X, and confining nearly everything to STAR Labs and one secret rebel lair plus Nazi HQ does make things a little claustrophobic at times, but it also allows everyone to lean into what a dopey sci-fi concept this all is. When all this action was taking place in the “real world” (and in a church for cryin’ out loud) it was a little more jarring. Now? It’s full speed ahead into absolute lunacy.

In the past, all of these crossovers were heavily dependent on the tone and core cast of their respective shows during their chapters. Throughout Crisis On Earth-X things have been more consistent. In fact, there’s very little here at all to make this feel like a Flash episode, other than the repeated return to STAR Labs. If this was staying true to the overall tone of the season, this would have been a much lighter hour, for one thing.

Hell, in several ways, this is almost more of a Legends Of Tomorrow episode. The continued focus on Firestorm, for one thing, and the fact that we got far more hours with Wentworth Miller as Captain Cold on that show than we ever did on The Flash. But for me, the real key to that here is Sara. We had two killer Sara Lance moments, both fairly quiet, and both, for me at least, seem like crucial illustrations of how well she has evolved as a leader. Not a leader by default. Not the Captain of the Waverider. Not the leader on her show. A superhero with an air of authority and the capability to lead and say the right thing, regardless of what group of heroes you put her with. Sara has taken to leadership far more quickly and naturally than Oliver ever did or that Barry ever will. And I think that final evolution just took place on someone else’s show.

All this plus a really GREAT looking Ray costume and power visual and a new and improved Red Tornado? Yes. Fine. I’m sold.

Oh, one last thing… did you catch Harry’s little smile before the camera cut away when Cisco confirmed that yes, the bouncing ball was indeed annoying the hell out of him? God, I love those two.

Also, I am not okay with that cliffhanger. At all.

Read Mike’s review of the previous episode, Therefore I Am, here.