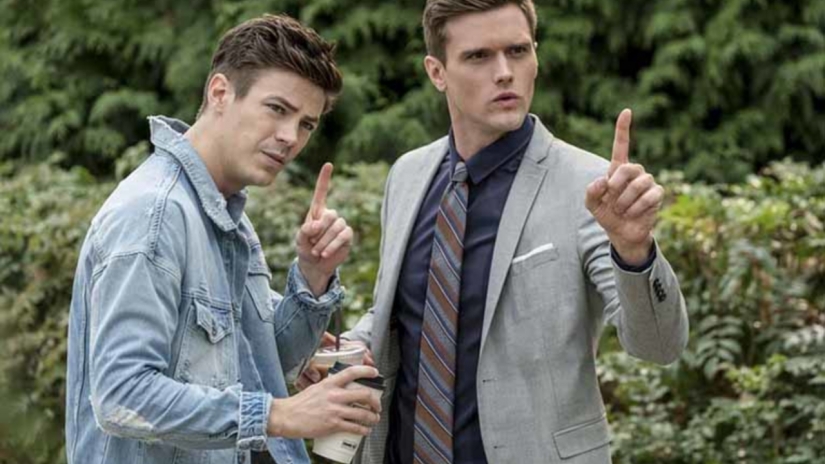 The Flash goes for lowest common denominator storytelling in a Dibney-centric episode with few delights. Spoilers ahead…

The Flash is not known for pushing the progressive envelope, but it rarely shows the level of cultural tone deafness that is on display in When Harry Met Harry. Literally every storyline included sexist, racist, or ableist subtext — a distraction in any sociopolitical climate, but one you would hope could be avoided in the current one.

Let’s start with the main plot, which saw Barry teaching Dibney how to be a superhero. While you might think this kind of lesson would involve the logistics of superhero-ing — i.e. how to best use is abilities or how to make decisions in a fast-paced environment — it actually involves a much simpler lesson: basic human empathy.

Ralph has to learn how to prioritise preventing or alleviating someone’s pain over the glory of catching the bad guy. This is kindergarden level stuff. Maybe this kind of simple superhero storytelling would have flown ten years ago, but pop culture has moved past basic privileged white man pain as an interesting narrative subject, if it was arguably ever even there.

Ralph has been so buffered by his privilege that his entire hero confessional moment is about how he has not had to think about literally anyone else’s suffering for the past five years. That is an extraordinary amount of privilege, emotional dumbness, and narcissism at work.

It’s hard to root for Ralph Dibney as a character at all, at least the way The Flash has characterised him thus far. It’s both unfortunate and not unrelated that, in the same week that sexual harrassment allegations against EP Andrew Kreisberg had The Flash boss suspended, The Flash featured a main character with the “funny” (because that’s how it’s played) habit of listing off the measurements of every woman he meets. This is not only harmful storytelling, it’s lazy storytelling, and to watch Candace Patton’s Iris and Danielle Panabaker’s Caitlin have to react to it is downright painful.

It doesn’t help that Dibney’s character is prioritised above Iris, Caitlin, and Joe’s. Without Dibney, perhaps we could have gone on Iris and Joe’s mission with them. Or maybe Caitlin’s longest scene could have been in the actual episode, rather than the still Dibney-centric Microsoft Surface ad that aired during the commercial break.

It also doesn’t help that Dibney’s nemesis in this episode is Black Bison, an indigenous woman who is trying to reclaim her people’s history from the museums and other institutions that have stolen them. While Dibney returns the items to Mina’s family after her arrest (a last-minute 180 that felt like a half-hearted response to a ‘Read the room, Flash’-style network note), Mina’s actions are treated with very little nuance for a majority of the episode.

It’s hard not to cheer for the Black Bison, a marginalised woman, when she breaks out of the Central City P.D. using a police mannequin, a contemporary symbol of institutional violence against marginalised people.

In the right hands, this episode could have been a nuanced, hard-hitting allegory for contemporary America’s continued mistreatment of indigenous peoples. In its current state, it is a lazy appropriation and exploration of the identities and symbols that are the most fraught for America right now. If The Flash is looking for an example of addressing important topics, while still maintaining the fun factor, it should check out its sister show Legends Of Tomorrow, which does this well.

The most successful part of the episode came in a high-concept, yet hilarious Council of Wells subplot, which saw Harry teaming up with three different multiverse versions (multiversions?) of himself in order to hunt down DeVoe. While I was not impressed with the Hugh Heffner-inspired Wells (again, showing your genitals in the workplace was not funny before the recent Flash-related sexual harrassment allegations), Cyborg Harry was the perfect degree of satire, a Mad Max-type, post-apocalyptic, rat-eating genius who Tom Cavanagh plays with just the right amount of deadpan. And, um, I liked German Wells’ turtleneck?

The Council of Wells were able to lead Team Flash directly to DeVoe’s door, but The Thinker was one step ahead of them. When Joe and Barry knock on the supervillain’s suburban door, they are created by a totally normal looking wife (DeVoe’s assistant) and DeVoe. It’s a cool move (as is the decision not to prolong their first meeting), but the moment is undercut by the framing of DeVoe’s disability as a reason why he couldn’t be a supervillain. Whether it’s the direction, writing, or both, it’s a cringe-worthy end to a cringe-worthy episode. The Flash can and has done better.