The End Of The F***ing World review: dark, funny & fearless 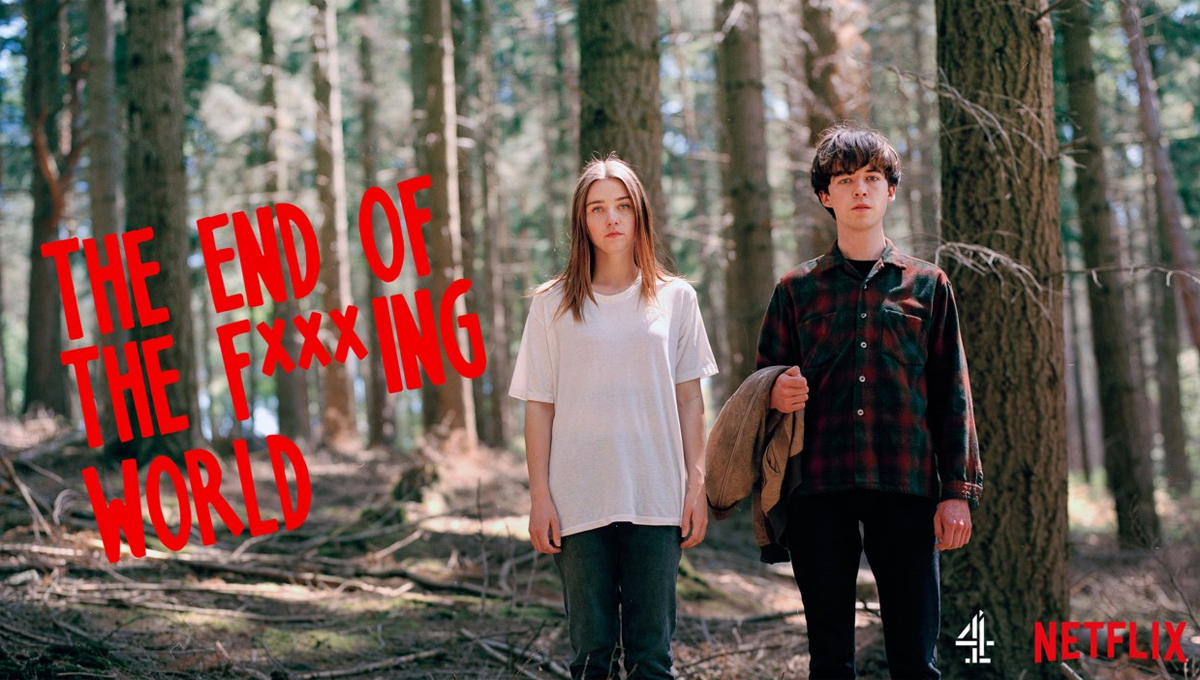 Contains plot references to episode 1, but no spoilers.

Between its punk title and an opening few minutes that reference child self-mutilation, animal killing, psychopathy and murder, The End Of The F***ing World starts off by weeding out the weak. Meet teenagers James and Alyssa, it says, he’s a monster and she’s angry. You won’t like them.

You will though, you’ll even come to love them. Just as the spikiest people can be the most vulnerable, this show’s aggressive nihilism conceals a tender and romantic centre. Its eight episodes are essentially the story of two young people damaged by abandonment who find temporary solace in each other. With a bit of murder.

Seventeen-year-old James has a plan. Testing out his self-diagnosed status as a psychopath, he wants to graduate from killing pets to murdering humans. Enter, Alyssa. “She’d started that term, says James’ voiceover. “I thought she could be interesting to kill.”

When Alyssa proposes that the pair of them escape from their “bullshit” suburban lives, James goes along with it. (“Showing willing was the best approach with Alyssa.”). By the end of episode one, they’re driving off in a stolen car with Alyssa defiantly declaring herself not scared. “She probably should have been” says James.

It’s a great cliff-hanger, the first of many in the show’s tightly plotted eight episodes. The whole series will be available to stream on All4 after the first half-hour is aired on Channel 4, a necessity for a series this addictive.

This Channel 4/Netflix co-production is the second time director Jonathan Entwistle has brought Charles Forsman’s 2013 graphic novel to screens. In 2014, Entwistle made short film TWOTFW starring Submarine’s Craig Roberts and Tamara Drewe’s Jessica Barden as James and Alyssa. That was the first step to this series, which adds Lucy Tcherniak as second block director and writer-actor Charlie Covell on adaptation duties. Barden is back for the series, with Black Mirror’s Alex Lawther as James. However strong the original pairing may have been, it’s hard to imagine these two being bettered. Barden is luminously good—funny, aggressive, heart-breaking—while Lawther pulls off a combination of dangerous and sympathetic so convincing it’s like an optical illusion. One minute, James seems irrevocably damaged, then blink, and he’s a child in pain. It’s a transformation both leads are able to pull off, and it gives this darkly comic story real emotional weight.

The emotional side is meticulously handled, never compromising its cool tone or threatening to turn into mawkishness. Sentimentality is repeatedly undercut with a gag. The adolescent voice also opens the door to expression that seems naïve but is satisfying and meaningful. (“Sometimes you realise you’ve had a thing keeping you going that might be a lie. When you actually really understand that, that the whole thing might have been a lie the whole time, it’s like you swallowed a stone, but, not recently. You swallowed it years ago.”)

James’ laconic voiceover is comically understated. “Things didn’t always go entirely to plan on my journey with Alyssa” he says, faced with their latest disaster. Beautiful understatement is this show’s mode (a character who took their own life is described as having “just always found everything a bit much, I think”). It moves from entertainingly caustic to movingly bathetic, and James and Alyssa’s voiceovers are used to excellent effect. (“Alyssa was kind of a nymphomaniac”, says James, deadpan, after she awkwardly places her hand on his leg). As well as the script, the characterisation is worthy of praise. James and Alyssa’s depth and progression announce themselves gently through their macabre adventure. At a crucial point, Alyssa’s abrasive persona merges with her internal voice – “I’m really scared” she says both in her head and out loud, a significant change from the disconnect between what she comedically thought and said in the early episodes.

Even the minor characters have an arc. We meet Alyssa’s mother only briefly, but her scenes carry a sense of her conflict and history, as does Steve Oram’s cheerful/tragic role as James’ dad. Gemma Whelan’s police detective Eunice Noon is introduced as comic relief, but goes on to make some realisations about her personal life, while a mother who makes an unsavoury discovery about her son has a whole conflict-based progression despite having only a handful of lines. The overall sense is of forward propulsion, with all elements moving towards the end, and no storytelling slack in sight.

The episodes are short, around twenty minutes a pop, and they whirl by in a flash. Like slices of perfect pop, nothing outstays its welcome. The whole story takes place over five or six days, with events sometimes rewinding and playing out from both Alyssa’s and James’ perspective. Their journey features a series of encounters with some great comedy cameos. Matt King, Felicity Montagu, Barry Ward, Geoff Bell, Wunmi Mosaku… Earl Cave is terrific in his brief appearance as a petrol station attendant who’s inspired to revolution by the maverick pair. Looks-wise, it’s a cine-literate adaptation that transforms rural England (specifically Kent’s Isle of Sheppey in its later episodes) into the plains and highways of America. The whole thing is starry-eyed about the States (“If this was a film, we’d probably be American,” observes Alyssa wryly at one point). The young leads eat exclusively at US-style diners and drink at a red-neck roadside bar, driving through wide, empty landscapes and isolated strips of road. The feel is a bit Badlands, a bit True Romance, a bit Pulp Fiction. That’s helped along by James and Alyssa’s mid-series costume-change, which seems to reference those film’s duos – Clarence and Alabama, Pumpkin and Honey Bunny, Kit and Holly.

Most of all though, it’s the music that carries the those references through. From dreamy fifties love songs to crooning country—Lonesome Town, used in Pulp Fiction, makes one appearance—the songs transport it over the Atlantic and back in time. The soundtrack by Blur’s Graham Coxon, is terrific and merits its own release.

The End Of The F***ing World might be referential, but it isn’t glib. It borrows style ideas, but has plenty of its own to add. As a TV series, it’s a great watch, and as a calling card for fresh talent, it’s outstanding – acerbic, tender-hearted and fearless.

All episodes of The End Of The F***ing World are available to stream on All 4 now.