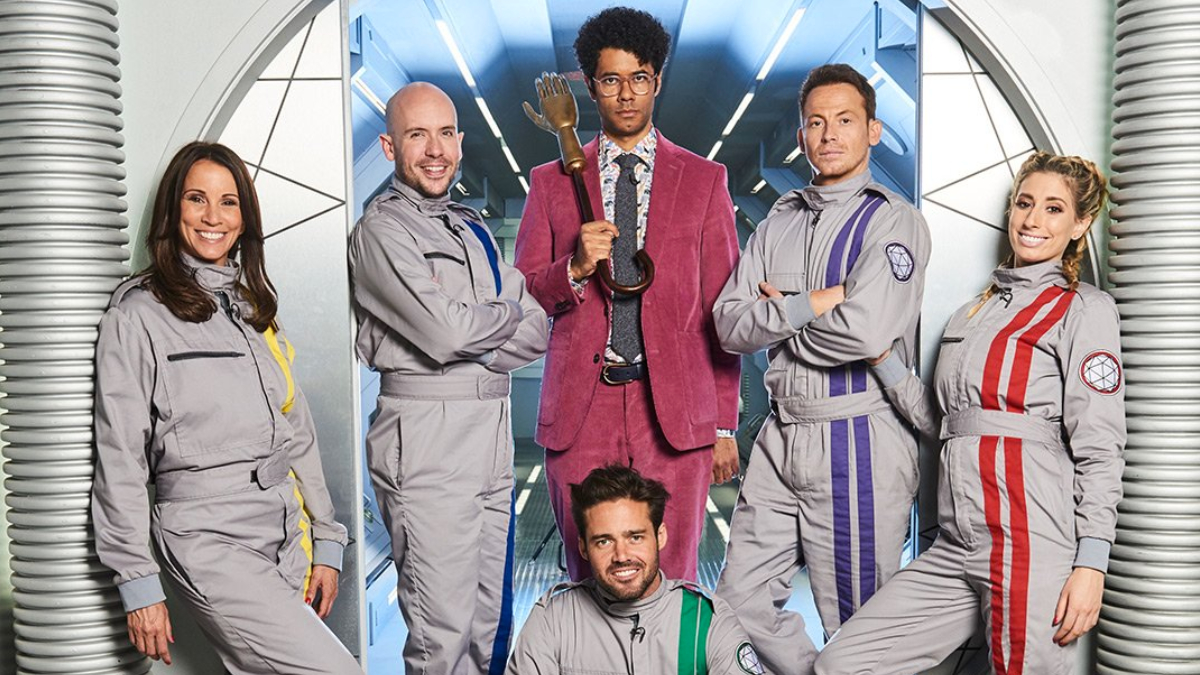 The Crystal Maze reaches the end of its celebrity run with a couple of Loose Women, an EastEnder, a Northerner and a class clown…

In the genus of UK gameshow hosts, Richard Ayoade defies sub-categorisation. He’s not a Blood-Drinking Reptilian Overlord (Chris Tarrant, Noel Edmonds, Eamonn Holmes), nor is he Someone Who Would Be Driving A Foxtons Mini If They Weren’t On TV (Patrick Mulhern, Davina McCall, Paddy McGuinness, Vernon Kay). He’s not a Barrymore, a Bowen or a Les Dennis, and neither is he a Grandad Who 100% Killed Someone In The War (William G. Stewart, Des Lynam, Bruce Forsyth).

Ayoade’s a mutant variety. The ludicrousness of dragging a quintet of Heat Magazine’s finest around in a Bristol studio decked out like four themed regional nightclubs has not, it’s fair to say, escaped him. His TV persona’s so far from the usual booming laughter and back-slappery of other gameshow hosts that it’s practically an art installation – ‘The Physical Impossibility of Relaxing in the Mind of Someone Awkward’.

It may not be a persona, of course. Perhaps Ayoade reads his children bedtime stories with the same air of mildly ironic embarrassment, stuffing The Gruffalo with references to Claude Chabrol and 1980s Ronnie Corbett sitcoms. Perhaps he tells his wife that he loves her using air quotes and staring at the floor.

No, not a word of it. This corduroy-wrapped treat was created solely for our amusement. He and his weird hand were designed expressly to confound celebrities and replace greasy banter with dry silences. Celebrity television could always benefit from more silence.

This week, Ayoade was more like a substitute teacher losing his grip on the class than a presenter. He chivvied the distracted team on, chided them for a lack of urgency and repeatedly raised his voice over their babbling, to little avail. They were in a Friday afternoon mood, and that meant backchat. Comedian Tom Allen, clearly being paid by the word, rarely stopped talking, while Stacey Solomon went as far as doing a mocking impression of Ayoade’s voice and insulting his mother – disappointing behaviour from one who formerly bore the title of Iceland Mum.

Ayoade’s mistake was letting them have sandwiches. Those slices of wholemeal and ham went straight to their heads. He should have known that bending one rule makes the whole thing come crashing down.

The whole thing very nearly did come crashing down due to a convincing lack of wins and a careless attitude to the few crystals the team did accrue. “One team, one dream” said Captain Spencer Matthews, casually using crystals to buy out locked-in teammates like he was flashing his dad’s gold card at Boujis. After four zones of flagrant over-spending on the crystal front, they were left with just two, giving them a princely ten seconds in the Crystal Dome. That’s poor mazing by anyone’s standards.

Somehow (cheating), those paltry seconds still led to ten grand won for Stand Up To Cancer, which makes the team’s dilatory approach less annoying. Relentless optimist Stacey said she thought they were all winners whatever happened, which was nice. I wonder if she and Joe Swash have a Live Love Laugh ornament in their living room.

Stacey won her clock game with time to spare, but cost the team a crystal for being bested by the ball-dropping game that did for Adil Ray last week. Tom failed to repeat Rylan’s triumph on the slippery log, but generously fell in the water three times for the fun of those watching at home. He was in the drink in one game and in the soup in the next when his attempt at the laser room also floundered.

Spencer deftly managed to avoid the foggy bog and retrieve a crystal in his first game. “He’s struggling with that plank,” judged Tom, which is no way to refer to Joe Swash.

Richard was right about Spencer’s perfectionism getting the better of him on the ‘build-a-drainpipe’ challenge. From our angle, he’d done the job, even unassisted by his valet. “That sound’s a bit annoying isn’t it?” shouted Tom, which is no way to refer to Joe Swash.

Swash himself scored a blinder on the crystal and the banter front. He won both his games and struck up an unlikely alliance with the Maze Master, who revealed himself to have more familiarity with the ins and outs of EastEnders than one might expect.

Between Andrea McLean being rescued from her Medieval Zone lock-in and riddling her way to a crystal in the Futuristic Zone though, we heard barely a peep from her. She was however, our introduction to Jarhead (Adam Buxton, doing an Adam Buxton voice). “Kind of creepy but good” was Andrea’s review. Seconded.

Jarhead will have to go some way, however, to beat the endearing love story developing between Ayoade and The Knight (Jessica Hynes). If TV were a high school movie, we’d force him to reveal his very real and deep feelings for her by unexpectedly voting them prom king and queen.

The Crystal Maze is taking a break for the summer athletics and will return with the first non-celebrity episodes in August.