The Bottom Shelf: The Return Of Swamp Thing, Creepozoids, Nekromantik 2 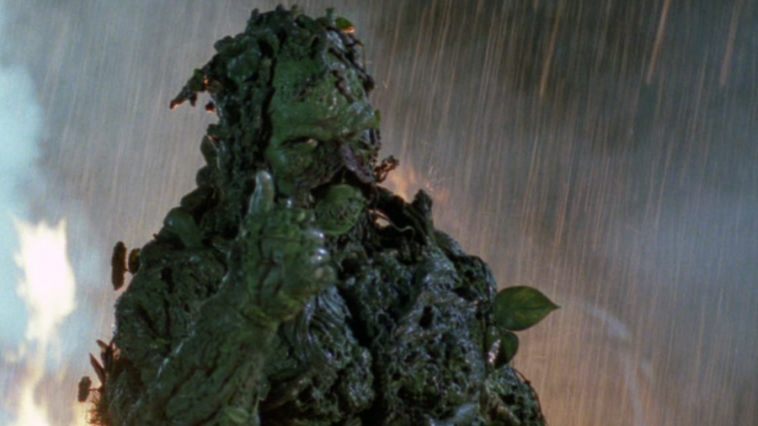 Our latest round up of genre DVDs and Blu-rays is here, with Wes Craven, Creepozoids, Dario Argento and more…

With the DC cinematic universe currently riding high on the coattails of Wonder Woman, Patty Jenkins’ megahit antidote to the miserablism of messrs Bats and Soops, it would seem churlish to point out that company’s past failures. Things being as they are, though, with the recent release of a camp classic on Blu-ray, it’s time to do precisely that.

The sequel to Wes Craven’s 1982 superhero effort that was more Toxie than Alan Moore, Jim Wynorski’s 1989 adaptation of the tale of scientist turned mutant bog creature Alec Holland, slyly monikered The Return Of Swamp Thing, cranks the ridiculousness dial right up to ‘comedy horror’ level. As Swampy meets the love of his life, Abigail – Heather (Locklear) be thy name – and battles the evil Anton Arcane (Louis Jourdan, returning, for… some reason), colourful critters both human and Dr Moreau-style come to life. Wynorski, whom you’ll know from the likes of Deathstalker 2, Piranhaconda and The Hills Have Thighs, creates a fun low-rent gaudy (looking lovely in HD) comic book extravaganza (in just 27 days’ filming, apparently) that involves a fair dollop of Basket Case-esque experimental monsters, shoutier kid sidekicks than the whole Goonies cast and the glorious sight of our nobel earth elemental Dick Durrock taking on all comers with a baseball bat and baritone quips galore.

Despite sadly staying on this side of the Frank Henenloter scale of latex puppet craziness, and not quite silly enough for some tastes, The Return Of Swamp Thing surely must remain better than any planned moody reboot with, say, Liam Neeson in the title role. Set in, of course, New L.A. in 1998, survivors of the usual calamity find a bunker that happens to be infested with kind of giant stag beetles that turn their victims into fellow stag beetle-people. Throw in a few rodents of unusual size and you have the makings of the movie singlehandedly responsible for the last few decades’ drastic fall in the UK’s stag beetle population.

Far more responsible in essence is David Durston’s 1970 exploitation favourite I Drink Your Blood, also out on 88 Films Blu-ray, in contrast, the movie which inarguably played the pivotal role in progressing the field of rabies research. Loosely inspired by the Manson Family murders and a real-life rabies epidemic in Iran, despite the film’s promisingly chilling premise of a rural cult taking LSD and fucking shit up, or something, this is more stupidly, amusingly weird than anything. So, somehow a baker’s grandson taints cakes made for cult members (who are also working on dam-building) with the blood of a recently carked canine (Greggs, take note), causing said troublesome but previously peaceful-ish cultists to start foaming at the mouth and killing people. Who cares, really, though, when the living come out with lines as brilliantly deadpan as “I’m glad they finished off each other because death by hydrophobia is absolute agony.”

Released the same year and just repackaged in a nicely chock-full of extras package on Arrow Blu-ray, is the infinitely classier directing debut of the great Dario Argento, his giallo classic The Bird With The Crystal Plumage, which looks simply gorgeous and, with the smooth Ennio Morricone (autocorrect: Ennui Morrisons) score, sounds equally so. Carving a neat, claret-soaked whodunnit with that staple of the American writer on holiday in Italy embroiled in a series of slayings, Argento here perfectly sets up the stall for an accomplished career that defined many of its genre tropes, rarely bettered.

I could say the same of Argento’s countryman Ovidio G. Assonitis’ 1981 slasher Madhouse, clearly influenced by the likes of Suspiria, but that would be bullshit. Also out on Arrow Blu-ray this month, this tale of a mental institution patient who escapes on an important anniversary with the sole aim of bloody murder is a pretty standard video nasty no longer banned (you can tell this writer is desensitized, from that statement), with all the usual ingredients (evil twin, snarling killer dog, cool synth score by Goblin or a sub-Goblin tribute act) and the odd directorial flourish.

An agreeably creepy dinner scene (you can guess what the guests are like) and fake cat looking wonderfully similar to Smarf from Adult Swim‘s ‘Too Many Cooks’ skit (check it out on YouTube) are tasty morsels in an otherwise bland dish.

Now for a real video nasty, then, with another Arrow movie, the lovingly put together Blu-ray release of Jörg Buttgereit’s Nekromantic 2, 1991’s sequel to his already controversial-horrible-deeply-erotic-not-really 1987 gonzo romance Nekromantik. Taking the sexual euphemism ‘the little death’ just a smidge too far, Buttgereit’s follow-up was actually prosecuted in his native Germany for “inciting the public to violence”, its gruesome depiction of necrophilia, grave-robbing, and severed schlong served on saucer too rich for some. We’ll finish this round-up with a production some may find even more disturbing, sickening even: the second sequel to cop Jim Belushi and barking partner Jerry Lee’s (non-sexual) romp K-9, 2002’s K-9: P.I, in which the pair are now private investigators, inexplicably gaining a belated Blu-ray release this month. A plot involving industrial espionage, a lethal femme fatale and an alsatian-poodle (can I repeat, non-sexual) love story of its own soon hits its stride as dog constipation, followed by dog flatulence and a puppy named Nick with the very same pooch-fart problems, dominate proceedings. The ever-available Belushi does his gruff ‘ordinary guy dealing with dog poo whilst trying to be a ladies’ man’ shtick as only he can in this sweet-as-Nekromantik canine crime caper.