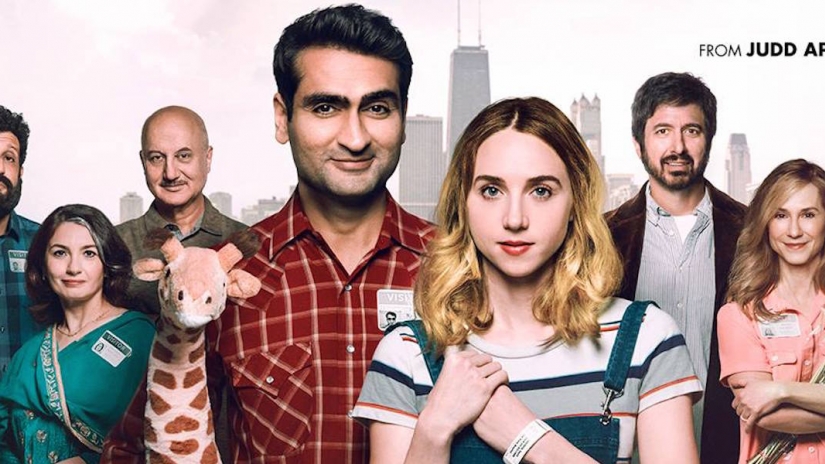 Kumail Nanjiani wears his heart on his sleeve in The Big Sick, a wonderful comedy film based on his own life…

What a treat it is to see Kumail Nanjiani stepping up to lead a movie. He’s impressed consistently over four seasons (and counting) of Silicon Valley, and his big screen supporting roles (in the likes of Central Intelligence, Mike And Dave Need Wedding Dates and Fist Fight) have offered giggles aplenty.

Now, Nanjiani is starring in the Judd-Apatow-produced feature The Big Sick, which is based on his own life. He’s effectively playing himself, and, cards on the table, it makes for a wonderful piece of cinema. It’s a comedy that juggles belly laughs and genuine emotions with precision.

As he previously did with Amy Schumer’s Trainwreck, here Apatow has given a platform to a younger comedic talent (although he’s not directed this one). And, once again, we get to reap the rewards by witnessing an excellent slice of entertainment.

It’s not all laughs, though: the premise is a devastating one. Kumail and Emily (Zoe Kazan) are going somewhat steady, but one big falling out breaks them apart. A while later, Kumail is called to a hospital and informed that Emily has a tough-to-diagnose disease, and that she’s being put into a medically induced coma. So much hasn’t been said between them, and now she’s being put to sleep for an un-guessable amount of time.

Emily’s parents (played by Holly Hunter and Ray Romano) turn up, setting up an intense second act. Personalities clash at first – not least because Emily was brutally honest with her folks about the breakup – which provides some hefty chuckles. But then something really heart-warming emerges: sofas are slept on, comfort food is eaten, and awkward evenings are spent together, as the three people closest to an unconscious young woman form something of an alliance in support of her.

It’s a film, really, about the human condition. Anyone who’s ever sat in a hospital waiting room, trying to Google a loved one’s condition, speculating about the latest diagnosis, will find something to relate to here. And, somehow, the film still manages to squeeze in laughs.

You can tell that Nanjiani is drawing on his real experiences here. He puts in a multifaceted performance, showing an emotional range that extends far beyond what we’ve seen from him before. A thoughtful subplot about Kumail’s family, and their desire to set up an arranged marriage, gives him plenty to work with (as well as adding vital context to the central breakup).

Another subplot, about Kumail’s attempts to break into stand-up comedy, feels a bit superfluous by comparison. The gigs play an important part in some bookending scenes, but, during the second act, scenes in the comedy club begin to drag a little. Without them, the film could feel punchier. As it is, there is a bit of a drag at points.

For the most part, though, this film is a real joy to watch. Laughs are wrought from awful inspirational speeches, scene-stealing Holly Hunter rages, X-Files references, awkward arranged dates, and a whole lot more. Teary-eyed material is shared by all of the main players, with each getting their chance to shine – and absolutely nailing it when it comes.

The script is mostly great, and the direction from Michael Showalter matches the material. Not showy or eye-catching, perhaps, but he succeeds in capturing some stellar, emotionally resonant performances.

Nanjiani is very much the star (and he deserves to get more work off the back of this), but the rest of the cast impresses, too: Hunter and Romano bring layers to their parental roles; Zenobia Shroff plays Kumail’s mother with humour and heart; and Kazan does amazing work despite lying down with her eyes closed for a chunk of the movie. Her sparky scenes outside of the coma provide the charming, beating heart of the piece.

It’s also worth mentioning the real life Emily V Gordon, who wrote the script with Nanjiani. It can’t have been easy trudging back through this period in their lives in search of gags, but we’re very glad that they did. The result is an excellent comedy film: one that deals with various sorts of love, packs in an awful lot of laughs, and has an important undertow about human understanding.

The Big Sick is in cinemas on July 28th.