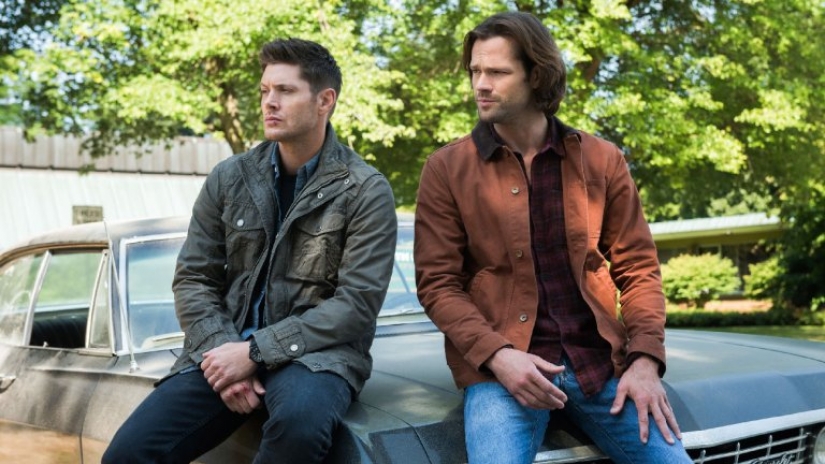 Sam and Dean pick up the pieces after last year's explosive season finale. Our review of Supernatural's season 13 premiere…

Supernatural is back for lucky season number thirteen. And what better way to usher it in than with a bouncing baby Lucifer? Well, he’s not a baby and he’s not Lucifer. We’ll get to that later.

The end of season twelve was a monumental fight against the clock, with battles happening all around, as baby Jack was born. Crowley died a hero, Mary Winchester faced off against Lucifer, and Castiel suffered perma-death. The premiere picks up exactly where last season left off, with Sam looking into the menacing eyes of Jack – not a baby or a child but a young man already.

Supernatural always pulls every trick it can in a finale or premiere, and that’s the case here. The style and tone of the episode is more movie-like than episodic. One of the early shots of the boys driving the Impala while looking for Jack is especially cinematic. The camera races alongside the Impala, following the conversation, then sweeping ahead. These kinds of shots are ones you don’t tend to see in the average episode. Probably because they are expensive to pull off.

The soundtrack also gave the episode a cinematic feel, and helped punch up the tension during key moments. When Dean prays, the soundtrack is hopeful and earnest, until it becomes clear that he’s not going to get an answer, and the music turns subtly sinister. During the action sequence in the police station, the tension is ramped up by the repetitive percussive sounds in the music.

Now on to Jack, Lucifer’s pride and joy. It would have been so easy to just make him pure evil, but fortunately the Supernatural writers like to do their own take on popular tropes. Jack may be the forbidden nephilim we’ve all been warned about, but he’s also kind of innocent and new to this world. The only time he hurts anyone is when he is afraid, and that’s by accident. Plus the ultimate twist in this episode is when we find out who Jack keeps asking for. It’s not Lucifer, but Castiel he considers his father. It’s really quite bittersweet.

By the way, Jack’s powers? Totally cool. He doesn’t just borrow from the angels and demons before him. His powers are unique. That trick he does where he freaks out and does that anti-gravity push to get people away from him? Sick. Plus he’s a great guy to have around if you don’t have any quarters for a vending machine!

We are also introduced to our Sam/Dean drama for the season. There are two parts to it. First, on the deal with Jack, Dean is obviously immediately against hearing the kid out. He’s a shoot-first-ask-questions-never kind of problem solver. Sam, meanwhile, seems to sense there’s more to Jack than meets the eye. Perhaps inspired by his own experiences, Sam feels that maybe Jack isn’t evil and is a victim of circumstance.

The other issue that the boys will fervently disagree on this season is what happened to Mary. They both know she’s in that alternate universe, but disagree on whether she had a chance to survive since Lucifer took the big plunge with her. I can see a number of brotherly Winchester spats over this in the near future.

Season thirteen has my undivided attention. It best live up to what it set up here, because this was a great way to kick things off.