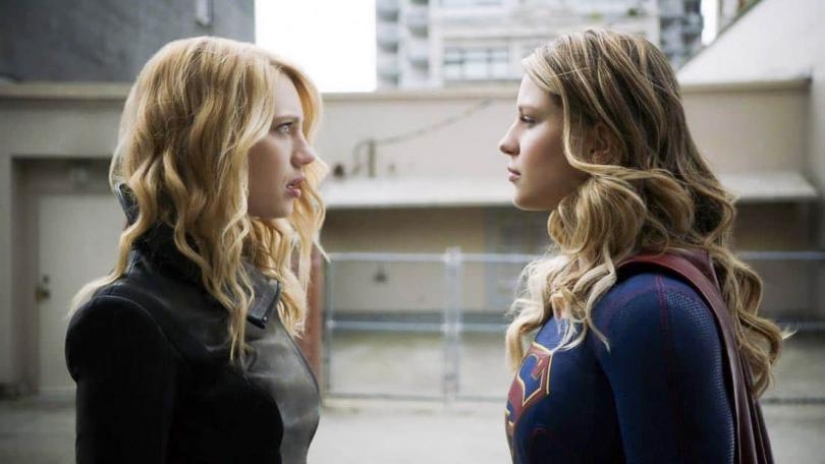 Supergirl faces down her demons in a slow, cerebral episode. Spoilers ahead in our review…

When they broke Supergirl for the season, the show’s staff would have had no way of knowing that the episode Triggers would air during what has been a very triggering time for many of their viewers. As women and girls share their stories of harassment and assault using #MeToo, there are no doubt some Supergirl viewers who have struggled with their own panic attacks, just like the woman from Krypton did in this episode.

Like many people, Kara mistakenly conflated mental health struggles with physical weakness. Luckily, she had her friend Winn around to set her straight and remind her that anyone can struggle with fear and trauma – just like anyone can be the target of sexual harassment or assault. Of course, in Kara’s case, her fear of Mon-El’s death is probably unfounded, although it’s odd to see it eclipse her memories of losing both her parents and her entire home world. Kara resolves her face-off with villain Psi by going the old “mind over matter” route, which unfortunately is a rather simplistic take on mental health. But that conversation with Lena at the close of the episode suggests that we’ll be seeing Kara work through her issues a little more.

Many have noted that Supergirl, as a show and a character, is a beacon of positivity in a television landscape that too often associates “good” with “gritty.” For those in need of some patriarchy-punching positivity of late, Supergirl was already a good place to turn. Seeing a hero with super strength struggle with trauma and turn to friends for support can make viewers facing similar hurdles feel seen, and I hope it inspires fans to do the same if they’re in need right now.

Psi as a vilain is well-suited to where Kara finds herself in her grief and uncertainy over Mon-El. Unfortunately, due to the nature of Psi’s powers, this episode was weak from an action standpoint. Not even Lena Grobglas (of Jane The Virgin fame), who is more than capable of playing a delightful villain, could raise the stakes. The only thing worse than J’onn grimacing with two fingers to his temple is Psi shoving her scrunched up face forward a few inches.

Mental powers are hard to show in a fight, and this episode was better off when it didn’t try. The look into Kara’s mind was more rewarding for viewers, although rewatching almost the entire trip from Krypton to Earth was a bit overlong. It’s hard to make that journey seem scary when we know it ends well for Kara, and she faces so many bigger dangers as an adult. The most effective Krypton flashbacks usually capture Kara’s relationship with her mother, since it’s a relationship that she can’t ever rectify, and “Triggers” was no different.

Meanwhile, Lena was shaking things up at CatCo. Lena’s dispute with Kara makes sense: it’s an inadvisable career move to tell the owner of your company that you’re too busy to do your job. Lena’s friction with James is a bit more confusing. The idea that she specifically excluded the head of editorial from an all-staff meeting is unprofessional and adversarial. The CatCo storyline could certainly use some life after a lacklustre previous season, but it’s hard to get invested in a plot-driven conflict that feels so contrived and artificial.

The narrative unspooling about mother-daughter duo Sam and Ruby, on the other hand, is much more engaging. Supergirl continues to keep representation of women and girls a priority with these new characters, as well as a dedication to depicting loving families in a variety of permutations. Ruby wishing her mother Sam had powers is almost adorable enough to convince her mother that she might just have them. While it appears for now that she does not, Ruby seemed right to question the credulity of the old “mom strength” trope.

This episode feels slow and doesn’t quite crackle, although it will be hard for any episode with Kara out of sorts to do so. Winn did his best with his usual quips (“I saved your life!” “Yeah but so has like everyone else here”) and an assist from J’onn, who is surprisingly invested in the wedding band vs. DJ debate. Here’s hoping that the return of M’gann and Sam’s new position at L Corp will help liven things up a bit around National City.