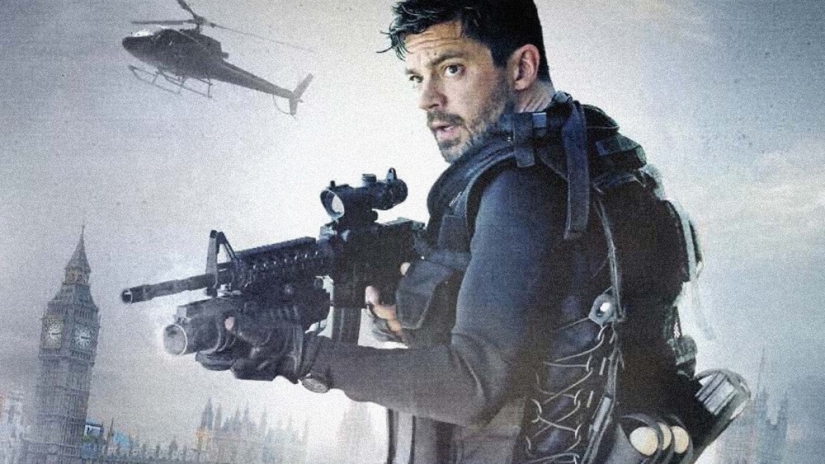 It says a lot about a film when its most memorable moment is an incorrect use of geography. The moment when a character is on a bus leaving Camden and is then suddenly in Piccadilly evoked the same noise from the audience of London-based critics that I imagine would have been emitted at the response to Thor’s ‘How do I get to Greenwich?’ question in The Dark World. It was a cacophony of snort-sigh-laugh that connoted that the audience had officially given up on the film. Even more unfortunately, that was also the film’s most entertaining moment, for Stratton is otherwise a pretty unremarkable caper: a by-the-numbers movie about a macho-maverick-man doing macho-maverick-man things.

Based on The Hostage – book number one of eight in the John Stratton series by Duncan Falconer – Stratton is about John Stratton (surprise!), a Special Boat Service operative (played by Dominic Cooper) who is currently tracking an international terrorist cell. The film opens in the middle of a mission which goes wrong (as these things do). Stratton’s partner dies and he returns to England in the knowledge that someone is on to him. He’s set up with a new partner (one who inevitability had a link to the old partner) and they go to MI5 to work out the next steps. The mission will bring out the best in some (possible love interest Gemma Chan) and the worst in others (slimeball Tom Felton) as Stratton will macho-maverick-man his way to the truth.

Going into the film, knowing that was the premise, it felt like the one thing I could be sure of was a solid lead performance from Dominic Cooper, a man who had burst onto the scene in The History Boys, and is currently offering what is consistently an extraordinary must-see performance in the TV series Preacher (currently showing on Amazon Video). Sadly Cooper gets rather lost in proceedings with what is a largely forgettable performance. To make for a star turn in truly macho-maverick-man role you need to approach it with gusto, with a special blend of charm/swagger/giving-of-zero-shits. Something, which our great leader Simon Brew would argue, that Jason Statham does with gusto. The fact that Cooper replaced Henry Cavill, who left five-days before shooting due to ‘creative differences’ (supposedly due to his doubts over the script), somewhat explains the end result. The role doesn’t feel like a natural fit for him, like watching him run around in someone else’s clothes – Cooper is no Statham and ends up providing a rather vanilla performance.

Other than that infamous and inaccurate use of London geography, and Cooper’s meh performance, there’s not all that much left to say about Stratton. The script is mediocre – an early on gag involving the use of the word ‘literally’ defined how things were going to be. The supporting performances seem to involve everybody playing themselves. Chan’s character is indistinguishable from her role as Mia in Humans – both involve measured responses to what other characters have said and playing with computers. Felton’s character seems like a watered-down version of Draco Malfoy, a 30-year-old progression-minded posh-boy civil-servant type. Connie Nielsen, as Stratton’s boss, is the character who brings the most clichés to proceedings and the kind of attempt at an English accent that has to be heard to be believed. Derek Jacobi is the, albeit slightly out-of-place, highlight as Stratton’s father figure.

The worst possible crimes an action movie can commit are either being boring or convoluted. Stratton is both of those things to an extent that is both boring and convoluted. A sequel is not required nor wanted.