Star Wars: what could an Obi-Wan movie entail? 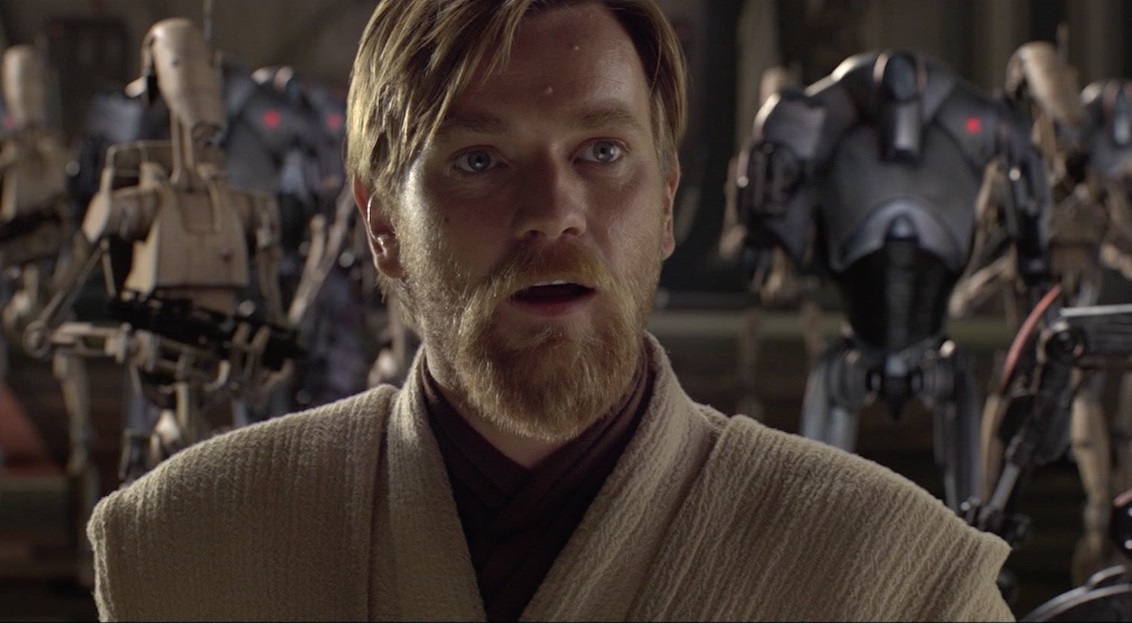 When Alec Guinness first portrayed Obi-Wan Kenobi, the cinematic landscape was enjoying a more civilised age. A film was a film, and if it went well, you might make another one. But now, it’s all about plotting out sequels and spinoffs years ahead of the fact. And so, it’s come to light that Old Ben might be getting his own ‘Star Wars story’ within Lucasfilm’s sprawling cinematic universe.

Stephen Daldry, director of Billy Elliot and The Hours, is said to be in the early development stages of an Obi-Wan movie. And that’s literally all we know. It’s not clear yet if Ewan McGregor will reprise the role (he has to, right?), or when the movie will be released. Step forward, then, into our wretched hive of speculation and guesswork. We must be cautious…

When would it be set? Of course, the most obvious time period to set an Obi-Wan movie in is the gap between Revenge Of The Sith and A New Hope. Little is known about what Obi-Wan did for 18-odd years, between arriving on Tatooine with the infant Luke and shambling into view years later to rescue the grownup Mark Hamill version from Tuskan Raiders.

The new Expanded Universe canon, which Disney launched after buying Lucasfilm, hasn’t offered that many glimpses. An animated Obi-Wan showed up in Rebels last year, for a scene set roughly two years before A New Hope. He won a brief duel with a vengeful Darth Maul, and offered some wise words for the show’s padawan protagonist Ezra Bridger.

Some canonical comics have also explored Obi-Wan’s time on Tatooine. In one story, he stood up to Jabba the Hutt to stop the slimy space slug from extorting tax money from the locals. An eight-year-old Luke got into some trouble with Jabba’s goons shortly afterwards, and Obi-Wan saved him, concealing his identity and using the Force from the shadows. A while later, Obi-Wan bought some parts to help Luke fix his damaged T-16 craft, but Owen Lars took offence and demanded the ‘wizard’ stay out of their lives.

The only other options, timeline-wise, would be to make a young Obi-Wan film set before The Phantom Menace or some sort of wartime movie set during Obi-Wan’s service in The Clone Wars. Neither of those ideas sound quite as exciting as exploring Tatooine with an Old Ben played by McGregor, though.

What would the plot entail? For a long time, this writer thought that Obi-Wan’s rematch with Darth Maul (who got robotic legs and a hefty thirst for vengeance during The Clone Wars) would be a thrilling sequence for a live-action Obi-Wan movie to tackle. But that storyline was wrapped up in Rebels, which has left me scratching my head a bit. What would the plot be in a movie set during Obi-Wan’s tenure on Tatooine?

It’s impossible to answer that question with any sense of sureness, especially with the limited information we have to go on right now. But it seems safe to say that Lucasfilm’s chosen screenwriters – who ever they turn out to be – will come up with something slightly more exciting than two and a half hours of Old Ben shooing Sand People.

It’s a tough story nut to crack, given that Old Ben was regarded as a crazy old hermit rather than an action hero by the time A New Hope kicked off. Obi-Wan’s heroics in this movie will have to take place under the radar, then. He’s on Tatooine is to keep an eye on Luke and stay off the grid, so he can’t launch a major attack against the Empire or make much noise of any sort.

Perhaps they’ll come up with a smaller scale story for Obi-Wan to get involved in. Tatooine always felt like the sci-fi equivalent of the iconic western frontier, so maybe this could be the space opera answer to Unforgiven. Obi-Wan could become something of a reluctant gunslinger, quietly protecting small communities from scum and villainy. If this movie does take place between the prequels and the original trilogy, don’t expect Obi-Wan to dispense classic zingers such as “that business on Cato Neimoidia doesn’t… doesn’t count.” These were dark times, after all, with the galaxy in the grips of a ruthless dictator and Tatooine overrun by crooks. The cantina music might have been jaunty during this era, but the public spirit was anything but.

Again, it’s easy to see the influence that classic western movies had on George Lucas’ original vision for Tatooine. It’s a tough place to live, where Sand People will attack you on the road and Jawas will push dodgy droids on unsuspecting farmers. And in the middle of it all is Obi-Wan, who has the skills to slice any number of arms off in a bid to put things right, but lacks the freedom to actually do that.

It’s easy to picture Old Ben as a Clint Eastwood or John Wayne type, in the first act of a film. Imagine him sat in the corner, brooding, knowing he could help people, but not wanting to do it. A greater evil could come for these people if he draws attention to the area.

Obi-Wana was once the height of galactic peacekeeping, but now he’s more like a ronin, trapped in the desert with no master and no real cause to follow. Perhaps this film will delve deep into this, exploring themes of loneliness, isolation and regret (lest we forget that Obi-Wan and Yoda fluffed up their chances to save the galaxy at the end of Episode III). With a western tone and some serious thematic work, this could be the most intimate and emotional Star Wars movie to date.

Who would the villains be?

It can’t be Maul, it can’t be Vader and it would be very odd if it was Palpatine, so who will be causing trouble on Tatooine during this Obi-Wan movie? Jabba the Hutt is the obvious choice, given that he’s the crime lord at the heart of Tatooine in the original trilogy era. Maybe the powers that be will put Jabba’s slimy grip on the underworld as the villainous obstacle that Old Ben has to overcome.

There are a couple of problems with this, though. Jabba wasn’t defeated until Leia choked him in Return Of The Jedi, and he never made any reference to a Jedi getting in his way on Tatooine. If Obi-Wan is going to go up against Jabba, thenm it will have to be in a clandestine sort of way. And he definitely couldn’t kill or dethrone the slug.

Alternatively, they could put Obi-Wan up against a new face. If they invented a new Tatooine character that doesn’t have a pre-assigned fate, Obi-Wan could get all up in their grill and kill them at the end if necessary. Again, if they want to follow the western theme, they could make the villain some sort of evil tycoon that’s bullying people out of their homes. Maybe someone one wants to take over the lucrative moisture farming industry? That sounds exciting, right?

Another option would be to base the film around an Imperial inspection on Tatooine, with Obi-Wan sneakily protecting people from Stormtroopers and toppling the local Imperials without alerting their bosses. However, it would be hard to find tension in that sort of story, when we know Obi-Wan and Luke won’t get onto Vader’s radar until A New Hope. A new baddie would probably be best, then. Although making Jabba the primary antagonist of Obi-Wan’s movie would be a bit tricky, there’s no reason why he couldn’t have a cameo. The same goes for Greedo and Max Reebo, and anyone else that has ever been spotted in the Mos Eisley Cantina and/or Jabba’s Palace.

Heck, they could even pan past Alden Ehrenreich’s Han Solo sitting in the bar, if they really wanted to. And let’s not forget that Boba Fett was seen a few times on Tatooine, most famously when he dropped in to check out the local landmark of the Sarlacc Pit. A Boba Fett cameo could be particularly interesting, given Obi-Wan’s history with his old man.

However, there’s one cameo that stirs the most excitement in this fan: there’s a possibility that Liam Neeson could finally make a Force Ghost cameo as Qui-Gon Jinn. After all, it was explained at the end of Revenge Of The Sith that Obi-Wan’s master had become one with the Force. And we know from the original trilogy that both Obi-Wan and Yoda pick up this ability at some point.

The Clone Wars animated show, the Ahsoka novel, and the comic book From The Journals Of Old Ben Kenobi have all featured brief instances of Obi-Wan communing with Qui-Gon. But it would be immeasurably cooler than that to see Liam Neeson and Ewan McGregor reprising these roles side by side. Maybe they could reminisce about their awesome Episode I hairdos.

Of course, it’s also possible that Joel Edgerton’s Uncle Owen and Bonnie Piesse’s Beru Lars could play a role. Lucasfilm could even cast a young Luke if they wanted to go right down the fan service rabbit hole, but it’s up for debate as to whether that would be a good thing.

Who is Stephen Daldry? Now that we’ve speculated as much as humanly possible about all these things we have zero clue about, let’s round things off by talking a bit about the one piece of info we do actually have: Stephen Daldry is the man developing this movie, so what does that suggest?

Notably, Daldry – who began his career in the theatre and picked up a lot of awards in the process – doesn’t have a massive action movie on his CV. This Obi-Wan film will not be advertised with the line ‘from the director of Expendables 3’, or anything like that. Thanks to Billy Elliot, though, Daldry does have experience with backflips. Could be vital.

Jokes aside, Daldry’s director credits – which take in The Hours, The Reader, Trash and Netflix’s The Crown – point towards a filmmaker that’s more interested in character development and personal interactions than blowing things up and choreographing duels. These are interesting sensibilities to bring to a Star Wars movie, but it’s a skillset that could gel nicely with an outcast Obi-Wan enduring against his demons in a desolate environment.

If we had to guess, then, a movie set during Obi-Wan’s wilderness years could be our first proper Star Wars character study. They could reposition this iconic Jedi as a lonesome and regretful ronin, who’s tempted to help the locals but fully aware of the risks involved. With a right script, it could be something really special. Daldry is taking his first steps into a larger world by joining the Star Wars franchise – here’s hoping he can serve up brilliance.