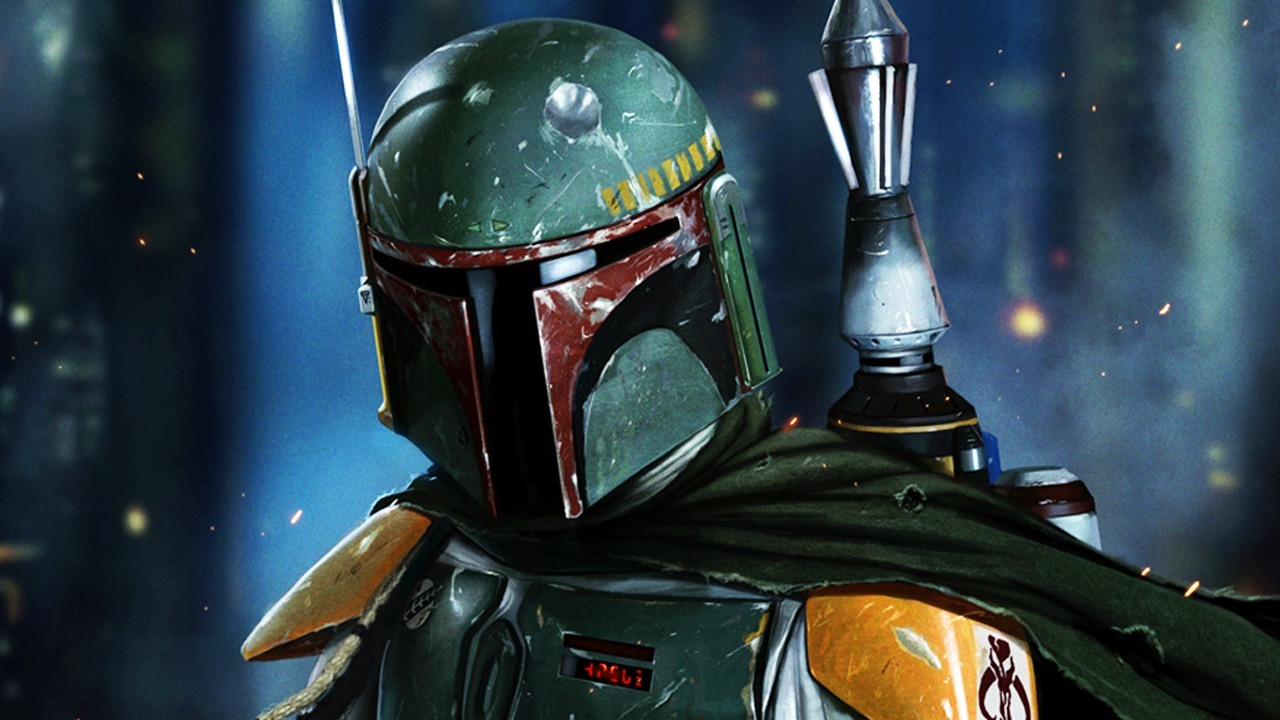 A live-action Star Wars TV series is on the way! Let’s look back at Underworld, the last attempt to get one made…

Last Friday was an exiting day for Star Wars fans, with UK followers of that galaxy far, far away waking up to some massive news. While we were sleeping, Disney chief Bob Iger announced a new trilogy of Star Wars films and a live-action Star Wars TV series.

Iger’s announcement included some details about the new movie trilogy (The Last Jedi’s Rian Johnson is helming it, with the story being totally separate to the Skywalker-centric ‘episode’ films), but the TV project was left utterly mysterious. All the fans were told is that the live-action TV series will be released on Disney’s in-development streaming service, which is expected to launch in 2019.

From an outsider’s perspective, this Star Wars TV series seems like Disney’s equivalent to Star Trek: Discovery. CBS used their Trek prequel series to draw American customers onto their paid online platform CBS All Access, and Disney seems to be prepping this Star Wars TV series for a similar corporate purpose. A new series from Marvel will also be exclusively available on the Disney streaming service, along with a Monsters Inc. show and a relaunch of High School Musical.

Long-time followers of the Star Wars news cycle will remember that Lucasfilm promised fans a live-action TV series once before. A series entitled Star Wars: Underworld was put into development back in 2005, with a lot of script work going on up. The project was talked about quite a lot, up until the moment that Disney bought Lucasfilm in 2012 and put the focus back on movies.

So, does this new announcement of a Star Wars TV series mean that the Underworld scripts are being dusted off and prepped for filming? It’s impossible to say at this stage. But still, it’s probably not a bad time to swot up on the show… Lucas and McCallum put time and effort into recruiting the right team of writers to bring the project to life. Russell T Davies, the Doctor Who showrunner of the time, was offered a job on Underworld but ultimately turned it down. “We’d go gather at Skywalker Ranch periodically, every couple of months,” Moore said of his work on the show, “and break stories and write scripts for this proposed series that George was interested in. And George was in the ring with us every day. And it was a fascinating, amazing experience.”

He added: “There was George Lucas and we’d be arguing stories and there was a point where I found myself in an intense argument with George about what Darth Vader would or would not do, and part of my brain kind of went, ‘What the hell are you doing? Are you really going to argue with George Lucas about what Darth Vader would do?’ George gets to win all of his arguments.”

As Matthew Graham told us, “George wanted to create twenty-five scripts for a season, and then he was enjoying the process so much that he wanted to carry on and do two seasons’ worth of scripts.” Those fifty scripts were eventually delivered. “Some of them were at first draft, some at third draft. Some needed a lot more work, some were in a really good shape,” Graham recalled in our interview. “We had a good sense of the overview of the world, and where it was going.”

The timeline and tone These scripts have never been shared on the web, so it’s impossible to say exactly what they entailed. But we do know a few things about the content of Underworld. For example, in an interview on YouTube, McCallum explained that the show’s scripts “take place between Episode III and Episode IV, that twenty year period when Luke is growing up. It’s not about Luke, but it’s about that period.”

“It’s called Underworld,” McCallum revealed in that YouTube clip. “It’s underneath what’s going on. It’s the criminals and the guys, the gangs, that are running – you know, like how Wall Street basically run the United States.” It’s believed that the bulk of the series would take place on the planet of Coruscant, unveiling a grim underbelly to the glistening metropolis seen in the prequels. Presumably, a lot of new characters would have been introduced to populate this eponymous underworld.

In an interview with IGN, McCallum expressed his belief that the Underworld scripts are the “most provocative, the most bold and daring material that we’ve ever done.” Words like “darker”, “grittier” and “character-based” came up in other interviews. It’s starting to sound every bit like The Wire or Narcos or Deadwood in space, isn’t it? In terms of specific details and story beats, a few little things are known. Writers room member Stephen Scacia revealed that the show included “the story of how Han met Chewie and how Lando lost the Millennium Falcon”, both of which now seem likely to appear in the feature film Solo: A Star Wars Story. Scacia also teased that he pitched to George Lucas “a Boba Fett action scene with his rocket pack”.

It definitely sounds like Boba Fett was involved in the Underworld series, which makes sense considering the criminal community setting. Daniel Logan – who played the young Boba in Attack Of The Clones – was training with Darth Maul actor Ray Park around this time, believing that he might need to reprise the iconic bounty hunter role in the Underworld series. (Logan reveals this fact at around the 25:20-mark in this video.)

Here’s another curious detail: in an issue of Total Film, McCallum was asked, “How can Leia claim to remember her mother when Padmé dies in childbirth in Sith?” The Underworld exec replied, “I think that could only be answered in the television series.” Game director Cory Barlog, who worked on the God Of War franchise, was brought in to talk about a potential videogame spinoff for Underworld. He saw some interesting stuff. Barlog recently spilled some beans, sharing a summary of a trip he took to Skywalker Ranch during the development of Underworld:

“I was allowed to go up to the ranch and read the scripts for the [live-action Star Wars] TV show. It was the most mind-blowing thing I’d ever experienced. I cared about the Emperor. They made the Emperor a sympathetic figure who was wronged by this fucking heartless woman. She’s this hardcore gangster, and she just totally destroyed him as a person. I almost cried while reading this. This is the Emperor, the lightning out of the fingers Emperor. That’s something magical.”

So, as well as being about criminal and gangsters, it sounds like those Underworld scripts also found room for iconic characters such as the Emperor, Han, Chewie, Leia, Boba Fett and Darth Vader (Lucas and Moore must have been arguing about him for a reason, after all.) As it stands, it’s impossible to tell how all these pieces would have fitted together. Perhaps the more famous characters would have only had cameos? When the script work was finished, as Matthew Graham told us, the writers’ room disbanded “with a shake of the hand”. He also told us what happened afterwards: “I was told, when we start gearing up on production, we’ll probably start in Australia. I was told maybe that myself and Chris [Chibnall] or someone else might go down to Australia and spend more time there, maybe giving an overview of the scripts. Helping with getting them production ready. But, of course, that day never came.”

Why not? Well, in a particularly unexciting end to this story, it seems to have been a money thing. And partially a TV network thing. Explaining why the show came to an impasse, McCallum said this to our chums at Den Of Geek US back in 2012:

“The episodes are too expensive and…well, we’ve got two things going on. Firstly, we’ve got television as we know it about to implode. You’ve got network TV, which is really where we should be because it has the dollars to pay for this and an audience, but you’re burdened by the fact you only get 42 minutes for an hour because of commercials. And then you’ve got cable, which has the most provocative and daring programming, but has audiences of 1 or 2 million people. They also have a very limited amount of money they can spend without wanting some sort of say or control over the material, which is absolutely repugnant to us in terms of the way we work.” And, speaking to Collider, McCallum explained why the Underworld show was so expensive:

“So imagine an hour’s episode with more digital animation and more visual effects and more complicated in terms of set design and costume design than a two-hour movie that takes us three years to make, and we have to do that every week and we only have $5 million to do it. That’s our challenge.”

Essentially, then, the show was too expensive to produce. And the project didn’t seem to match up with what TV could handle at the time. The producers didn’t want to be beholden to short running times or creative interference, so the project hit a brick wall.

The chances of a revival?

McCallum said both of those things, about why the show didn’t get made, before Disney swooped in at the end of 2012 and paid $5 billion to buy Lucasfilm and take control of the Star Wars brand.

The following year, Paul Lee, entertainment president of the Disney-owned ABC TV network, said this: “We’d love to do something with Lucasfilm, we’re not sure what yet. We haven’t even sat down with them. We’re going to look at [the live-action series], we’re going to look at all of them, and see what’s right.”

Lee’s statement instigated a rumour that ABC might dust off the Underworld scripts and finally get the show made. But here we are four years later and that hasn’t happened. Plus, to be fair, ABC is exactly the sort of traditional network that might be too rigid for Underworld.

But we can confirm that people at Disney have looked at the Underworld scripts. In 2016, Matthew Graham told us that he “went up and saw Lucasfilm in their new offices at Disney while they were still in prep on Episode VII. I know that they’ve got the [Underworld] scripts, and that the scripts have been read. But what they plan to do with it, there’s a big long term strategy for Star Wars that’s being formulated, and only a few people are actually privy to what that entails!” Indeed, none of us outside of the Disney bubble know the exact specifics of the Mouse House’s plans for Star Wars. But McCallum did say that traditional networks and cable outlets weren’t the right fit for the big budget nature and seemingly sprawling content of Underworld. Perhaps a streaming service, with the backing of both Disney and paying customers, is exactly the sort of platform that could allow Underworld – at long last – to transition from an ambitious idea to a tangible reality.

For the fans that have been hearing about this project for over a decade, that’s certainly an exciting prospect. Even if the scripts had to change to fit in with the new Star Wars canon – the Han Solo origin stuff would surely have to go, for one thing – fans would still love to see Underworld after all these years of hype.

However, Bob Iger’s announcement that the Disney streaming service will be hosting a live-action Star Wars show came with literally no information about what that show will be. It could be Underworld, or it could be something else entirely. We’ll just have to wait and see…