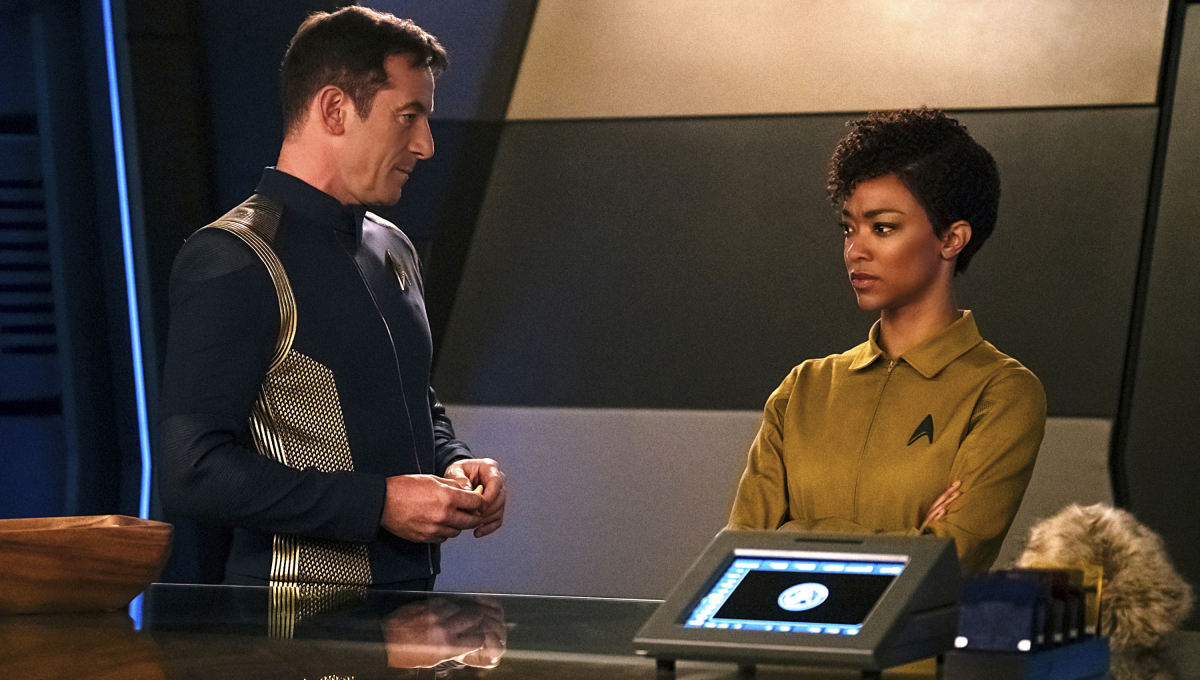 Hello to Jason Isaacs in the latest Star Trek: Discovery episode, which is proving much more character-centric than previous series…

1.3 Context Is For Kings

So, following the traumatic backstory two-parter that opened this season, we finally got to meet the Discovery in this episode. And unlike the various Enterprises (or Voyager), which are warm, homely places, the Discovery is more like one of those weird, creepy ships that the Enterprise (or Voyager) encounters and has to solve the mystery of what killed everyone before it kills them too. Indeed, that’s sort of what happened to Discovery’s sister ship, the USS Glenn.

Indeed, it’s interesting to get a look at the ship from Michael’s perspective – both intrigued and suspicious of this strange science vessel where everyone clams up rather than tell you what’s going on. Lorca is an instantly great character too – full of charm, but also weirdly lizard-like. Jason Isaacs was a great choice for the role, because he can play the subtlety that leaves you wondering whether he’s actually a villain or if he’s just doing the wrong things for the right reasons.

Clearly, between a strange ship and a morally ambiguous captain, this isn’t going to be the type of Star Trek series we’re used to. The presence of Saru and Tilly go a long way to making it clear that this show isn’t going to be super-dark all the time, but there’s enough going on that we can’t quite put our faith in the crew the same way we would’ve in previous shows. There’s a lot I can’t wait to find out more about – Lorca’s eyes, the specific mysteries behind the Discovery and her mission, and of course, what everyone’s up to.

So the good stuff includes the story, the new ship, and the new characters, while the bad stuff is largely restricted once again to the dialogue, which is so “As you know…” that Lorca delivers a line that begins “I shouldn’t have to remind you…”, which is essentially the writer saying “I apologise for the following exposition but I didn’t have time to work it in more creatively.”

The thing that REALLY interests me, though, is that this is clearly some kind of secret/black ops vessel, and that calls to mind Starfleet’s secret/black ops division, Section 31. And I hadn’t made the link until this episode reminded me of Section 31, but Discovery’s registration is NCC-1031. Could be a coincidence, could be an Easter egg, or it could be a sign that more stuff’s coming.

Either way, if this is the quality of an average episode then I’m super-happy with the way this show is turning out. It’s a lot more character-centric, at least in terms of an individual and their arc, than previous shows have been – but also, that’s a bit like taking the best 10 Data/Picard/Worf episodes of TNG and pretending they were written as a single story. What I like most about this show is that it hasn’t forgotten to inject moments of curiosity, wonder and philosophy into the story – and that makes it enough like Star Trek that I can cope with any other changes.

Michael also mentions Amanda, Sarek’s human wife who was her foster mother and Spock’s biological mother. It’s likely, too, that Spock is the son Michael used to sit with while Amanda read Alice In Wonderland to them. Although there’s JUST enough ambiguity for continuity fans to explain it away, angrily.

Lorca has a tribble in his office. Tribbles (first appearance: TOS 2×15, The Trouble With Tribbles) are probably as famous a part of Trek lore as anything we’ll see in this show, but the interesting point is that Tribbles, famously, can spot Klingons. Does this mean Lorca is worried about Klingon infliltrators? And specifically, the human-appearing Klingon augments (ENT 4×15: Affliction). Probably!

Straal mentions the Zee-Magnees prize, which has been referenced at least twice in Trek history: by Dr. Daystrom in TOS 2×24: The Ultimate Computer, and by Dr. Graves mentioned in TNG 2×06: The Schizoid Man.

The reveal that the USS Discovery is using organic-based computing as part of its experimental technology calls to mind the USS Voyager, which had organic “biomimetic gel” instead of isolinear circuits – although in practise all that really meant was that the ship occasionally caught a plot cold or something.

And hey, it’s Easter-egg central, but when Lorca demonstrates the mycelial network to Michael, Lorca mentions Romulus (home planet of the Romulans), Andoria (home planet of the Andorians) and what sounds like Ilari, which may or may not be the Delta Quadrant planet of the same name, as visited in the Voyager episode Warlord (3×10). There’s also Starbase 11 (seen in TOS 1×14 (Court Martial), the Janus VI mining facility (TOS 1×26: The Devil In The Dark) and an unnamed planet with a Preservers obelisk (from TOS 3×03: The Paradise Syndrome). Blink and you’ll miss ’em.

DSC WTF: Despite all the crazy sci-fi nonsense in this episode, the thing that surprised me most was Tilly’s hair.

DSC LOL: “Check whether the helical injuries on this corpse match the spiral markings on the hull” *clicks one button* “They’re a match.” SORRY, WHAT? What Tricorder setting was THAT?

Who’s That Face: It’s Jason Isaacs. That guy from, like, everything. I keep expecting him to trap everyone in perspex boxes in the basement, a feeling which was not especially helped when he trapped Michael in a perspex box in his starship’s basement…

Read James’ review of the previous episode, Battle At The Binary Star, here.