Spider-Man: Homecoming – how to do a reboot right 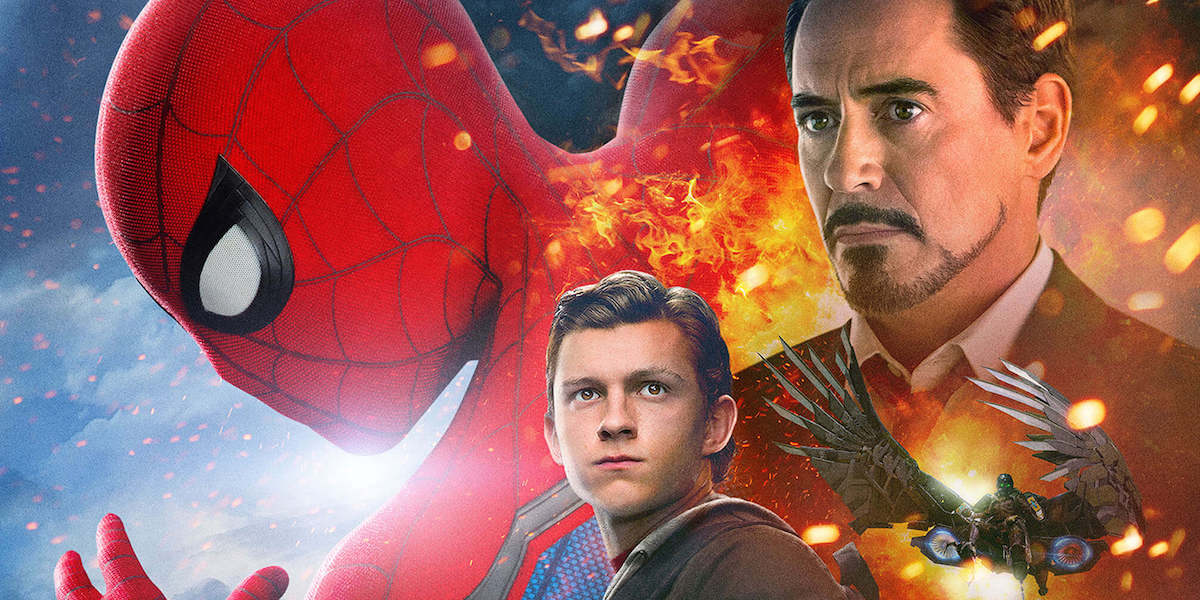 Spider-Man: Homecoming makes the franchise feel fresh, without sacrificing its core values. What can Hollywood learn from that?

Spider-Man: Homecoming is looking like a huge success already. Big bucks are being brought in at the global box office, the reviews have been glowing, and much of the casual down-the-pub level scuttlebutt seems to be positive as well. This is a remarkable feat, considering that this is the second attempt this decade to reboot Spidey’s cinematic saga.

So, what works so well about it? What lessons can Hollywood learn about reboots from the success of Homecoming? We did a bit of thinking, and came up with this list of things that make the film feel fresh, despite its reboot status…

Spider-Man: Homecoming and Captain America: Civil War, which set for the stage for it last year, make the canny move of skipping over the origin story stuff that everyone already knows.

The spider bite, the tragic death of Uncle Ben, and Peter making his first superhero suit are all in the past before either movie kicks off. Although those moments are all alluded to, re-treading old ground doesn’t eat up time in this reboot like it did in The Amazing Spider-Man.

Marvel Studios has strong form in this department. When they inducted a certain big green rage monster into their universe with 2008’s The Incredible Hulk, not that long after 2003’s Hulk, they reduced the experimentation origin story into a pacey credits sequence, allowing the bulk of the film to take place in a world where Bruce Banner already has his powers. And, even though The Incredible Hulk is nobody’s favourite Marvel Cinematic Universe film, it does benefit from skipping over the familiar material.

2015’s Fantastic Four film came ten years after the previous film of the same name, and yet it still felt like a rehash – like The Amazing Spider-Man, it spent most of its running time building up to something we’d already seen on screen before. Does anybody want that from the movies?

The MCU’s method of rebooting things, by benching the old material and cracking on with new stuff, is a superior first step – it takes some real confidence, but the results can be brilliant.

Double down on character development Skipping over the predictable origin story plot points doesn’t have to mean we miss out on character development. If anything, not bothering with Peter’s first days as Spidey gives Homecoming the space and time to dig a little deeper into its central character. And Tom Holland gets to reap the rewards by turning in a great performance, working from a strong script.

While the previous Spider-Man franchises rushed to get Peter out of high school and into the big city, Homecoming decides to take a breath and double down on Peter’s teenaged troubles. Being Spider-Man means letting people down, and web-head does little to help Peter with teachers, friendships, bullies, girls, academic decathlon commitments or his home life.

This is a movie where Peter needs to learn to be a hero, and learn to keep up with his hectic everyday world. Spidey’s missions get in the way of everything else, and it doesn’t help that Peter is fairly naff at superhero-ing at this point. A botched battle sees him locked in a warehouse overnight, at one point. This ends up putting Peter’s best friend, the girl he likes and bunch of other people in mortal danger.

To hammer the point home that Peter is on a learning curve here, Robert Downey Jnr’s Tony Stark shows up to tell him off at regular intervals. We’ve skipped the origin story, but we haven’t skipped ahead to a point where Peter is perfect hero or a perfect person. Tony doesn’t let Pete forget that.

This feels like an important takeaway. By all means, if you’re planning a reboot, skip the origins. Fans will thank you for it. But don’t forget to challenge your central hero and showcase their development. These things are vital when it comes to crafting engaging characters.

Find a new hook, and stick with it Bringing Spider-Man into the MCU was always an exciting prospect, but now it feels like a stroke of genius from Sony. Teaming up with Marvel Studios hasn’t just brought commercial success; it’s also opened new creative doors, making this reboot feel totally different to the previous one.

Finding a new hook to snare cinemagoers’ interest is vital to making a reboot work. Last time around, Sony pushed the ‘untold story’ element in the Amazing Spider-Man trailers, hinting at a wider conspiracy around Peter’s transformation. But the execution was poor: two films in, and the secret elements of the Spidey story were still being coyly teased rather than properly explored.

The MCU connection is arguably more exciting than making Peter’s dad a shady scientist, and Homecoming is anything but coy about it. The opening shot is a drawing of The Avengers’ NYC battle, and after that we get props from various films, familiar locations, criminals dressed as heroes, Peter’s Thor impression and guest spots from Iron Man, Captain America, Happy Hogan and Pepper Potts.

Obviously, every cinematic reboot from this point onwards can’t take place in the MCU. (For lots of films, that wouldn’t make much sense.) But the core lesson is still valid: finding a fresh way to tell a story – something a bit more imaginative than ‘let’s go dark and gritty this time’ – can go a long way in upping the fun factor, and getting audiences interested.

In Sam Raimi’s Spider-Man trilogy, we had the Green Goblin, Doc Ock and the Sandman – each film had a villain who came into being after a science experiment went wrong. In Mark Webb’s pair of Amazing Spider-Man films, we had the Lizard and Electro – again, villains born from lab accidents.

After five movies of dodgy science creating baddies, it was time to go back to formula and try something different. To that end, the six writers who penned Homecoming came up with a savvy plan: to call a moratorium on experiments going haywire, and instead focus on a villain who builds their own tech, has no prior knowledge of Peter, and has a clear motivation for their actions.

Enter Michael Keaton as Adrian Toomes, aka The Vulture. Although we’ve seen villains who wanted to be villains in Spider-Man movies before (James Franco’s Harry springs to mind – his transformation was very deliberate), we’ve never had a baddie quite this grounded.

He’s got a crew and a family depending on him, a city that’s screwed him over, and a pile of alien tech to work with. His motivation is clear (understandable, even), the design is great, and Keaton’s performance sells it. And there isn’t a botched experiment in sight.

This allows the film to put a strong foot forward, pitting Peter – hungry for adventure, and utterly unprepared – against a new threat that feels very different to the villains we’ve seen before. Again, there’s a lesson for future reboots to learn there. Swapping one villain for another isn’t worth much if their story is basically the same. Another thing that feels fresh in Homecoming is Peter Parker’s love life, or lack thereof. The Raimi films gave us a star-crossed romance between Peter and Mary Jane, and the Webb ones wowed us with the screwball chemistry shared by Andrew Garfield and Emma Stone. Rather than try to top that, Homecoming shows us a version of Peter who completely sucks at romance.

Holland’s Peter has a crush of Laura Harrier’s Liz, and he just about manages to ask her to the dance through his manifold layers of awkwardness, but that’s about the extent of his romantic success. He misses the academic decathlon final and bails on the prom, annoying Liz on both counts, as Spidey’s quest to bring down The Vulture eats away at Peter’s life.

At the end, there’s no snog. Liz wishes Peter well, and leaves town. It’s one part of a downbeat ending that sees Peter not joining the Avengers, not getting the girl, not getting to captain the academic decathlon team, and accidentally revealing his secret identity to May. This is a kid that can’t do anything right. Spidey may have won the day, but, even at the end of the film, Peter is still a loser.

Although there are references to previous cinematic Spidey love stories – Karen urges Peter to try an upside-down kiss, Flash Thompson mentions branzino – Homecoming doesn’t try to emulate those story arcs, or top them. Wisely, it sidesteps romance for the most part, and finds a fresh angle by revealing The Vulture as Liz’s dad. (Boy oh boy, that scene was awesome.)

… But don’t forget the iconic stuff Basically, then, it’s clear that trying new things – finding fresh angles – is vital to making a reboot seem like an exciting prospect, despite, by its nature, being a rehash of something we’ve seen before. Just because you’re doing a Spider-Man movie again doesn’t mean you have to remake the previous ones beat for beat.

By side-lining Peter’s love life, making the Vulture unique among the Spider-Man cinematic rogues’ gallery, adding the MCU elements, skipping the origin story and throwing in plentiful character development and personal struggles for Peter, Homecoming manages to feel creatively ripe, despite its status as the third attempt at a Spidey franchise.

However – to all the Hollywood execs that definitely aren’t reading this – it’s important to remember that these characters are iconic for a reason. Putting Peter in his homemade costume for so long added to the film’s unique feel, but you couldn’t end the movie without giving him some proper threads. He’s more than earned the suit by the time those fun-filled credits roll.

Peter Parker is also a nerd, and the film wisely keeps that element intact. There’s no ‘geeks are cool now’ skateboarding scene in this one. Even someone with no friends calls Peter a loser, to his face. And going to a party is like torture for him. Unlike Andrew Garfield’s version, you can’t imagine Holland’s Peter swinging in at the last second, picking up his diploma and snogging the girl.

Peter being geeky and the superhero/life balance being genuinely tricky are core components of this character. Homecoming keeps those intact, but surrounds that core with new characters and ideas, as well as the MCU moments, which feel like icing on the cake.

So, it turns that ‘reboot’ doesn’t have to be a dirty word. In the right hands, and with a fun new hook, they can actually be really, really good…