Should Star Trek use the F word? 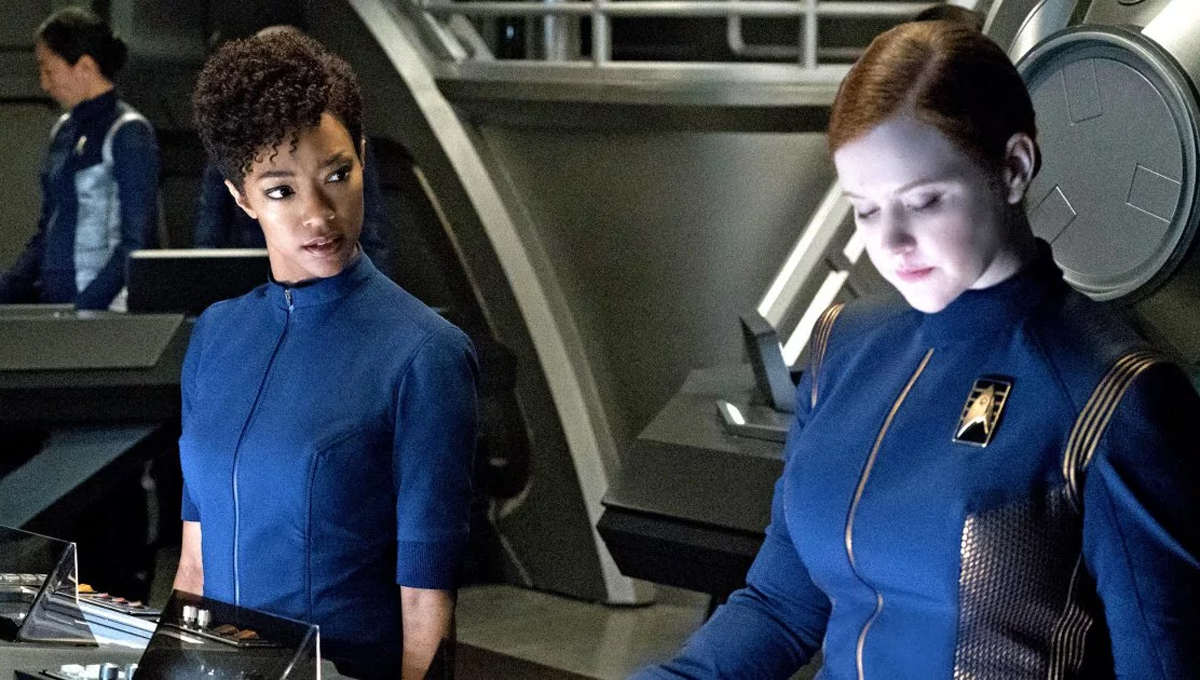 For the very first time this week, Star Trek: Discovery broke a linguistic taboo. Did it shock, annoy or amuse you?

In one of the lighter moments in last week’s episode of Star Trek: Discovery, while working on a way to use Discovery’s spore drive without the tardigrade known as Ripper, Cadet Sylvia Tilly exclaimed, “You guys, this is so fucking cool!” Suddenly realising she was on duty in a military workplace, she immediately apologised, and Lt Paul Stamets reassured her, “It is fucking cool”. It was the first time anyone has ever used ‘the F word’ in canon on Star Trek. Some were amused. Some were horrified. Some thought it was about fucking time.

There are a lot of issues wrapped up in these two tiny, fairly inconsequential lines in the fifth episode of this new branch of the franchise. Some of these come from the fact that Star Trek is now over fifty years old, and language has changed and evolved in that time. Back in the early twentieth century, ‘slang’ words like ‘spiffing’ might have been considered forbidden (as they are in Elinor M Brent Dyer’s Chalet School books), while by the 1960s, ‘damn’, though considered inappropriate by some Christians (because it refers to damning someone to Hell) was considered mild enough by the networks to allow Bones to say ‘dammit’ several times on the Original Series. There is a cultural aspect to this, as well as a temporal one – British Harry Potter fans were horrified when, in 2001, the American screenwriter and American director of Harry Potter And The Philosopher’s/Sorceror’s Stone had Ron say ‘bloody’ and ‘bloody hell!’ repeatedly, because in the UK, these were still considered fairly strong swear words, while in the US, they were considered appropriate for an eleven-year-old child to use.

The issue of children and swearing also plays into the question surrounding swearing on Star Trek, and into much bigger issues with what producers, writers and fans want Discovery to be as a whole.

Discovery is, like so many sequels and spin-offs before it, literally and metaphorically ‘darker’ than its predecessors. For many adult fans, aching for a more ‘modern’-feeling Star Trek and thinking wistfully of the ‘reimagined’ Battlestar Galactica, the relatively short-lived Stargate Universe and the not-quite-completely-dead-but-not-quite-alive Torchwood, this is a very welcome new direction for the series. However, along with the ‘darker’ themes (and lighting), Star Trek: Discovery has also embraced a more adult tone in every way, including elements that are sure to earn it at least a 12A certificate from the BBFC when it gets a home entertainment release, such as dubious actions on the part of the heroes, and grisly close-ups of bloody human corpses. As the bodies are human, the blood is proper, red blood, not pink Klingon blood or green Vulcan blood – the tricks producer Nicholas Meyer used when he directed Star Trek II: The Wrath of Khan (in which Spock dies a grisly death from radiation poisoning, but to young eyes just looks like he’s been painted green) and Star Trek VI: The Undiscovered Country (in which there’s bright pink Klingon blood flying around all over the place in zero gravity, which is rather amusing). The issue here is that Star Trek, in all its other iterations, has always been a great example of genuine ‘family’ viewing. Unlike some (not all) episodes of Doctor Who, it does not play to a child audience in particular, and it has always tackled adult themes, albeit sometimes in roundabout ways, as was often the case in the morality plays of the Original Series. Deep Space Nine dealt with war, the Next Generation told stories about racism and sexuality (not always very successfully, it has to be said!), Voyager told metaphorical stories about rape, psychological trauma and Holocaust denial and Enterprise dealt with terrorism. However, they all did so in such a way as to be appropriate for an audience of all ages – that is, without gory imagery, without overt references to sex acts (which did rather hamper the sexual stories) and without swearing. They also placed immoral behaviour, for the most part, on ‘bad guys’, enemies or guest characters – the hero characters were almost always behaving in a way that was as morally right as they could manage.

As a result, families could sit around and genuinely enjoy the show together, getting different things out of it depending on age – I watched Star Trek from childhood with my whole family, and it was genuinely a bonding experience that we all still remember fondly.

This brings us back to the issue of our changing times, as many would argue that children these days learn far worse swear words far earlier, and there is no reason to avoid swearing in a show children might watch (a similar argument might even be made for the gory scenes, though this depends largely on the sensitivity of the child). The fact remains, though, that very young children are certainly excluded by the inclusion of swearing (because they have a tendency to repeat words loudly and often to anyone who will listen) while for slightly older children, who are more likely to get something out of the show, whether they are allowed to watch will become dependent on their parents’ views on swearing. There are, of course, plenty of alternatives to swearing, especially in science fiction. We’ve already mentioned the cultural differences that result in different words being considered swear words in different countries, and Captain Picard used to get away with saying ‘shit’ fairly often by saying it in French. Milder words that sound similar (and have a stronger meaning in different countries) can be substituted, like Father Ted’s ‘feck’. Other science fiction shows have invented their own swear words like ‘frell’, ‘smeg’ or ‘frak’ – but since Star Trek has never used such words, this would only really make sense if spoken by a character from a previously unknown culture, like Saru.

It is also undeniable that invented or non-English swear words simply do not have the same power as ‘real’ swear words. Words only have power because we give it to them, but that power once given is undeniable. Spock’s inability to use ‘colourful metaphors’ in Star Trek IV: The Voyage Home is only funny because they are real words, and no amount of ‘frelling’ or ‘frakking’ has the same impact as a good old ‘fuck’. Tilly’s outburst and Stamet’s surprisingly chill response to it lift the episode, providing a very welcome moment of comic relief in a very dark story, and this effect simply could not be achieved using a ‘tamer’, less controversial word. But the use of the word also sends a signal to the audience, loud and clear – this is a grown-up, ‘dark’ show, and you will see and hear grown-up things on it.

So what, in the end, is the answer? Should Star Trek use the F word? Each individual viewer’s answer to that question will depend on two things.

First, it will depend on their personal feelings about swearing in general and about ‘fuck’ in particular – this will depend entirely on their own cultural, linguistic and possibly religious background, and the show’s writers and producers have no control over that. But the second factor on which this question rests is – what do we want this new Star Trek to be? Do producers, writers and viewers want an ‘adult’ show complete with immoral actions from sympathetic characters, grisly elements, a high body count, and swearing? Or do they want a show that is suitable for all the family, of all ages, to watch – in which case they probably need to tone down some of this stuff? Once again, each individual’s answer will depend on their personal taste – and, ultimately, the direction of the show will depend on whether the former group outnumber the latter.