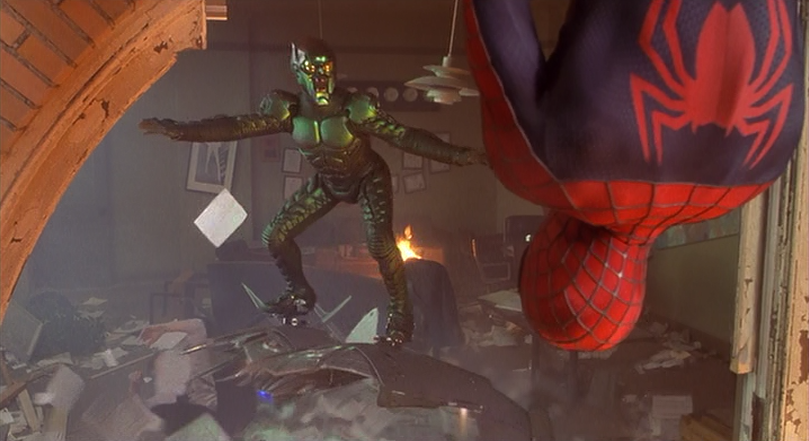 Check out how Willem Dafoe's Green Goblin could and arguably should have looked in the first Spider-Man movie.

While there’s plenty to praise about Spider-Man: Homecoming, Sam Raimi’s first two Spider-Man movies will always have a special place in our hearts. The first film features a a nearly flawlessly executed first act origin story, the cast is perfect, and the franchise gets off to a tremendous start. And how could you possibly go wrong with the great Willem Dafoe as Norman Osborn, right?

Well, for one thing, you could put him in a plastic costume with an immobile full face mask that looked like it would’ve struggled to pass muster for a villain of the week on Mighty Morphin Power Rangers. It says a lot about just how good the film’s final act is (not to mention Dafoe’s performance) that it’s able to overcome the Goblin’s costume shortcomings.

But it wasn’t always going to be this way. Amalagamated Dynamics Inc originally had a much more interesting plan for Dafoe’s Green Goblin mask. Not only would this have been more faithful to the comics, but it would have allowed the actor to emote using a hybrid of makeup and animatronics. It’s also a genuinely terrifying design.

Check out these two test videos. The first shows the design, sculpt, and makeup/prosthetic process while the second shows the mask in action.

What’s really cool about this is how the classic Green Goblin purple hood serves a practical purpose, seeming to hide the wiring that’s needed to help animate the mask. Still, this likely would have been a nightmare for an actor to wear. It’s probably pretty top heavy, for one thing. Couldn’t they have split the difference between this and what we ended up with, though? While it’s a given that superheroes and supervillains need to undergo a certain amount of redesign for the big screen, you’re unlikely to find many defenders of that big screen Green Goblin design (the one from The Amazing Spider-Man 2 was arguably an improvement, but wasn’t anything to write home to Aunt May about, either). The fact that we missed a chance to let Sam Raimi do something appropriately horror-tinged for Green Goblin in that first movie is a real shame.

It’s unlikely we’re going to see Marvel/Sony take another swing at Green Goblin any time in the near future, as they’re pretty focused on showing off new villains. But hopefully the next time someone decides to put Norman Osborn on the screen, they get him right. They could certainly learn a little something from Amalgamated Dynamics’ original try with the character.