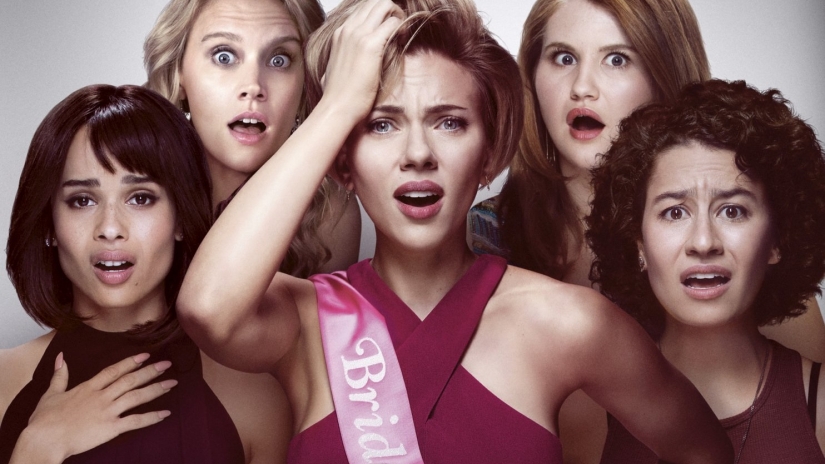 At what point does a hen do become a hen don’t? In Rough Night, the new comedy thriller from the makers of Broad City, it’s around the time that a cheeky night of drinking and novelty penis props turns to involuntary manslaughter, and things quickly escalate into a mashup of Very Bad Things and Bridesmaids.

Jess (Scarlett Johansson) is the bride-to-be; a driven senatorial candidate who’s taking a weekend off from her campaign for her bachelorette party. Her college friends Alice (Jillian Bell), Blair (Zoë Kravitz) and Frankie (Ilana Glazer), and her Australian friend Pippa (Kate Middleton) converge on Miami for a boozy, drug-fuelled weekend away that quickly spirals out of control after the accidental death of a male stripper in their party house.

Outside of the obvious reasons for not wanting to get caught, each of the friends has their own issues to stay out of this sort of thing, to say nothing of their mistrust of the police (the script does not do the state of Florida’s reputation any favours), but they only wind up digging themselves deeper into trouble over the course of the evening.

The most common thread among the less favourable reviews of Rough Night has been its relative safety. This is a dark comedy that never really comes out from under the umbrella of a studio comedy, no matter how bleak the subject matter. If you’re paying even a little attention early on, you can probably guess how the characters will eventually wind up.

But for this review, we’d argue that there’s much more fun to be had on the journey than just getting to the destination. This is a well cast, sharply written film. Director and co-writer Lucia Aniello doesn’t allow it to meander over line-o-ramas or gross-out jokes like so many other R-rated comedies of its type, and for such an apparently predictable film, it’s got a wicked sense of humour.

Part of that comes from the array of talents in the ensemble cast. It turns out we’ve been missing a fine straight-woman in Johansson, whose composure gradually slides from the uncanny Hillary Clinton impersonation of the first act into incredulity and then hysteria later on. She’s well met by Bell, who’s better here as the jealous, narcissistic best friend than she has been since her breakthrough turn in 22 Jump Street.

Glazer and Kravitz are great as ex-lovers too – since their college fling, Blair has married (and divorced) a man and had a kid, but Frankie is still blatantly in love with her, and aside from being very progressive for a studio comedy, it gives the film some much needed heart. We’ve still yet to see the comedy that can resist cutting to McKinnon’s incredibly expressive face at any given moment, and once again, the Saturday Night Live MVP steals scenes left and right here.

Elsewhere, co-writer Paul W. Downs puts in a hilarious turn as Jess’ insecure fiancee Peter, who represents one of the only notably gender-flipped character types in the movie as he flaps about the possibility that his bride-to-be is getting cold feet. The resulting panic-fuelled all-night drive seems like it’s going to wear thin, but improbably, it gets funnier every time we check in with him.

The script is good, but it’s only the combined endearment of this ensemble that helps the film to overcome its amoral premise and get you laughing. The fateful accident isn’t played for laughs at all, but Ryan Cooper’s floppy physical performance as the corpse still manages to draw extremely guilty giggles thereafter.

At least there has been some effort put into grounding the story. Aniello and Downs have spoken about how they wrote the script trying to imagine what a normal person would do if they were trying to get out of this situation. The answer is, of course, that they’d make everything ten times worse, but in its escalation, it never once feels forced or repetitive, like so many other so-called ‘raunchy’ comedies do. The only real comic cul-de-sac is a brush with gleeful swingers (Ty Burrell and Demi Moore), who are introduced as potential witnesses but ultimately don’t add much.

Rough Night doesn’t take many risks, but then it’s very easy for supposedly edgy comedies to come off as shallow and mirthless – looking at you, The Hangover Part III – and goodness knows we need more comedies that feel like they have actually been written down beforehand, rather than baggy, improv-heavy laughers. Counter to that trend, this is a fun time at the movies, which at least gets away more smoothly with what it’s trying to do than its unwitting characters.