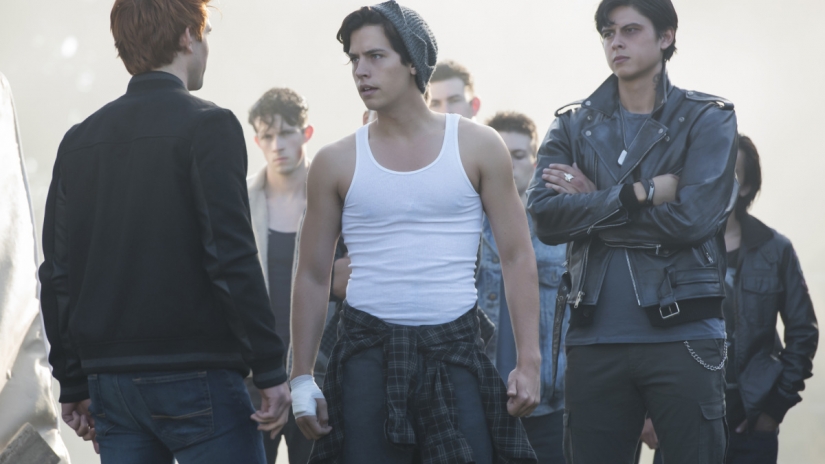 The darkness fully envelops Riverdale in a jaw-dropping episode full of risks and surprises. Spoilers ahead in our review…

2.5 When A Stranger Calls

“I told you we were the same.”

Okay, pick your jaw off of the floor and breathe, because that was one, exhilarting, eventful hour of television.

We are only five episodes in to this 22-episode season and the glacial pace that marked Riverdale‘s first season is but a memory at this point, because there’s a lot that went down tonight. Before we get into the meat and potatoes of tonight’s installment, a brief recap: The Black Hood tortures Betty by making her cut her friends out of her life unless he will murder them (she subsquently breaks up with Jughead and BFF Veronica in the harshest manner possible), Alice Cooper is revealed to be what she hates the most – a Southsider, Jughead officially joins the Serpents AND gets a tattoo AND makes out with Toni, most of our main characters get high on Jingle Jangle, Nick St. Clair drugs and attempts to rape Cheryl then rightfully and gloriously gets the shit kicked out of him by Veronica and Josie and the Pussycats, Betty basically signs Nick’s death warrant by giving his name to the Hood. Throw in a fantastic performance of ‘Out Tonight’ from Rent, and you’ve got an episode that could be the series’ best to date.

Let’s start things off by once again praising Riverdale MVP Lili Reinhart. Forced to protect the lives of her sister and her friends by giving in to the Hood’s demands, Betty is put through the emotional ringer tonight. The character is, after all, such a beacon of purity and sweetness on this show that she has The Chordettes’ 1958 hit ‘Lollipop’ as her ringtone. Here, Reinhart portrays Betty as despairing yet still finding the strength she needs to do the Hood’s bidding in order to keep her loved ones alive.

One of Riverdale‘s greatest creative choices is how it didn’t take the expected route of having a love triangle between Archie and the two female leads. As portrayed on the show, Betty and Veronica are the ideal of strong female friendship, something that the television landscape can use so much more of. So it especially stings when Betty’s fires off a ferocious takedown of Veronica, describing her as little more than “recycled banter and plunging necklines.” Worse still is the fact that her declaration that Veronica is only friends with everyone because of circumstance seems at the very least to be plausible. We know very little about her pre-Riverdale past, other than she was a rich party girl who felt remorse for how she used to behave. Ronnie is quick to not restart her newly revealed coke habit when offered a bump by the wretched Nick St. Clair (Graham Phillips), but would she have been so quick to partake of the Jingle Jangle had he not been around? So when Betty calls Veronica out at this moment in the friendship, her claims don’t feel entirely baseless. Indeed, subtextually Betty had to really sell her disgust with Veronica in order to convince the Hood that they were no longer BFFs – and Reinhart delivers this powerfully. It’s obvious that B&V won’t be frenemies for long, but for now it feels like something deep and lasting has fractured between them.

Speaking of relationships gone kaput, I can only imagine how upset the Archie Twitterverse is that Bughead is no more (again, for the time being). The strength of Riverdale’s writing allowed Jughead’s storyline to subtly mirror Betty’s, proving yet again how similiar they both are and therefore, OMG, so perfect together you guys. After learning that Fangs Fogarty and Sweet Pea – the names on this show continue to be a concerto of inspired lunacy – is planning on destroying the Riverdale Register with a pipe bomb, Jug realises that he, like his father before him, must become a Serpent to keep the peace. Just as Betty is severing her ties for the greater good, so must Jughead join the gang of thugs in order to protect his loved ones and avoid “all out war” between the town’s North and South sides.

In their scene together at Pop’s, Bughead muses that they wish they could be like Romeo and Juliet, only with a happy ending. Good luck with that. Of course this wouldn’t make for great drama, so these young lovers must remain star-crossed, lest their world of milkshakes and biker gangs straight out of this David Lynch PSA would burn around them. Further complicating matters is Jughead and Toni locking lips at the end of the episode. Damn, Betty is really having a day.

Finally, let’s address Nick St. Clair’s attempted rape of Cheryl. In a time when men in power are finally being called to the carpet for harassment is part of the ongoing newscycle (although still not nearly enough), along comes Nick with his psuedocharm and attempts to threaten the Lodges’ SoDale deal unless Veronica sleeps with him. After her rejection literally slaps him across the face, he turns his attention to Cheryl Blossom, whom he drugs and then attempts to rape. Fortunately, Josie and the Pussycats and Veronica arrive in time to prevent a further assault upon Cheryl, and their subsequent kicking the living shit out of him is the most cathartic moment this show has ever had. I’m not trying to be glib comparing the fiction of what happened in tonight’s episode to real events and the horrific trauma that so many victims out there have had to deal with, but rather speaking of how, planned or not, Riverdale is mirroring our society. We live in a era when too often men yield their sexuality, wealth and power like a weapon, so to see such injustice shut down immediately by strong female characters on a progressive and forward-thinking show like this one is something truly inspirational.

The aftermath of tonight’s events and, given the final scene, the fate of Nick will likely dominate the next couple of episodes. I’m hopeful that Riverdale will discuss the issue of sexual assault with the grace and sensitivity that it deserves.

You can read Chris’ review of the previous episode, The Town That Dreaded Sundown, here.