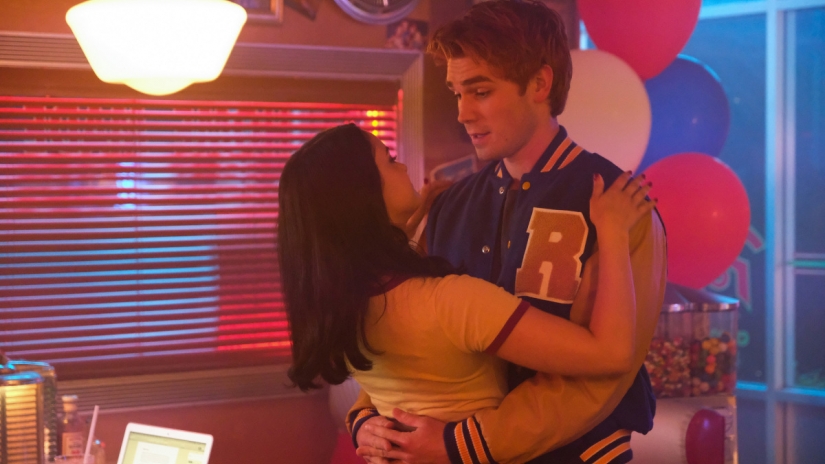 Before I tackle that shocking final scene, let’s go back to the beginning. The start of this week’s instalment is a seemingly simpler (though still kind of shitty) time for Archie and the gang compared to where we are when the credits roll. As the episode opens, Jughead’s narration informs us that Pop Tate’s Chok’lit Shoppe is the “heart of Riverdale.” And indeed it may very well be. In fact, the main reason that Betty makes saving Pop’s into her crusade du jour is that the restaurant seems to be a thread that runs through the tapestry of the lives of all longtime Riverdale residents. To her it is a place that represents warmth and comfort. Archie, not so much. Given the horrendous shooting of Fred Andrews – who doesn’t really do much this week other than to exude some Dylan McKay-worthy sulking – at Pop’s, Archie contemplates never returning there. He’s not alone. All of Pop’s employees have quit, and someone spray-painted the words “death diner” on the establishment. The Chok’lit Shoppe is in trouble, and Betty is determined to save it.

Assisting her in this mission is Veronica, who finds herself increasingly frustrated with her parents’ secrets and lies. “The blindfold’s off daddy, I just can’t put it back on,” she coldly tells Hiram after he arrives at Riverdale High with a floral bouquet peace offering. Aside: Did anyone else think those flowers looked sub-par given Hiram’s fabled wealth? At this point, the Lodge family scenes are the weakest part of Riverdale, especially how obvious both Hiram and Hermione’s dark sides seem to be. Hermione’s spontaneous covering for Hiram regarding the letter he wrote to Veronica while he was in jail was a nice touch, but the couple’s true intentions will doubtlessly take weeks to be revealed. It’s understandable that the writers want to establish the mystery behind the elder Lodges, but there are so many other interesting things happening elsewhere on the show that these scenes presently feel like wheel-spinning. The Blossoms had a similiar problem last year which paid off, so I’m willing to be patient with the Lodge storyline here.

Veronica isn’t the only one with family woes right now, Jughead learns that his father is facing twenty years in prison for his involvement in disposing Jason Blossom’s body. After visiting “snake charmer” lawyer Penny Peabody (the most Archie Comics-sounding character name ever), he is told that if someone from the Blossom family grants F.P. mercy, his sentence could be reduced or even commuted. And so Betty and Jughead, or “hobo and bride of hobo” as Cheryl has it, pay the remaining Blossoms a visit to request one of them go before a judge with hopes of helping F.P. out. When that plan falls apart, Dark Betty re-emerges and threatens to make the video of Mr. Blossom killing Jason public unless Cheryl speaks on F.P.’s behalf before the judge. One stylish outfit and some perjury from Cheryl later and things are suddenly looking up for F.P. – even if Jughead’s consulting of Peabody will almost certainly both the Jones’ men in hot water down the line. Nevertheless, I fully expect that F.P. will be back on the streets of Riverdale by the time Thanksgiving rolls around.

Over in Feckless Gingerville, Archie’s various plans for stopping the masked man who shot his dad and killed Ms. Grundy involve the following: Going on ridealongs with the Riverdale F.P. to play junior crimefighter, consuming energy drinks/taking uppers, and, most notably buying a gun. Solid plans all, well done Arch. Someone make sure this kid doesn’t watch Death Wish anytime soon, because he is on the edge.

Over at the big Retro Night soiree at Pop’s that Betty and Veronica have organized through some well-intentioned bullying , Josie and the Pussycats (minus Valerie but plus Cheryl) do a deliciously on-the-nose performance of Kelis’ “Milkshake” before the obvious secret that Mr. Lodge bought the Chok’lit Shoppe is revealed to the audience. Another dose of “the road to hell is paved with good intentions” realness is subsequently dealt to Betty when her mother informs her that several drug deals have gone down at Pop’s, and that the young Ms. Cooper has given “crime a haven in Riverdale.” Families!

Then comes the big shocker. Moose and Midge Klump (Emilia Baranac, in the series’ debut of the character) are getting high on Jingle Jangle and fooling around when the masked gunman who left Fred for dead and killed Ms. Grundy shoots them both. As blood splashes across the dashboard of Moose’s car it seems like Riverdale officially has a serial killer on the loose. We have to wait another week to see the immediate aftermath of this brutal attack, but something tells me that Alice Cooper’s declaration that the town’s teens have “come a long way from dances at the gym and varsity football tryouts” is more true than ever.

– We need to talk about Jingle Jangle. After Sheriff Keller briefly mentioned it last week, we learned tonight that it is a popular drug sweeping through Riverdale thanks to dealers like Reggie Mantle. From the information presented so far, it seems as if Jingle Jangle is a cross between Adderall and Levitra. But the real world “Jingle Jangle” is actually the name of an album and single by The Archies from 1969. (It was a top ten hit in the U.S. and briefly topped the charts in Canada). As my friend Mary pointed out, its inherent ridiculousness — it is ingested like Pixie Stix — and sudden ubiquity in the series brings to mind the drug Supercool from Upright Citizen’s Brigade. I can’t express enough how much joy it brings me that Jingle Jangle is apparently going to be a huge part of this season. Also, this: Clearly the teens of Riverdale are massive hypocrites.

– Early on tonight, Jughead referred to Pop Tate’s Chok’lit Shoppe as the “heart of Riverdale,” which also happens to be the name of the current storyline in Mark Waid’s Archie comic, chronicling how the critical injuries of Betty Cooper in a car accident impact the entire town. – Can we talk about the creepy flyer Archie designed to catch his father’s shooter? Whenever The Archies become a thing on this show, their gig posters are going to be next-level weird.

– Best line of the night once again goes to Cheryl for the following: “I did not emerge from the frozen depths of Sweetwater River nor the flames of Thornhill to allow my Vixens to sling milkshakes at some death curse diner.” Bravo.

– Mr. Weatherbee telling Archie’s class of the death of Ms. Grundy is already the best plot contrivance of the new fall season. – Although life in Riverdale is full of maple syrup blood feuds, second-degree incest, and an appaling amount of milkshake consumption, it is still comforting to know that Archie still finds time to be shirtless at random intervals during any given day. – Like the Southside Serpents she represents, the character of Penny Peabody (Brit Morgan) made her debut in the pages of Bob Bolling’s Little Archie comic. Can we get a round of applause for the writing staff’s commitment to incorporating even the most obscure characters from the Archieverse into the show? – Jughead’s takedown of new Blossom residence Thistlehouse — “not exactly downsizing, is it?” — is perfection.

– Every episode to date has taken its name from a film, echoing narrator Jughead’s love of cinema. As much as I love the 1981 Sylvester Stallone/Billy Dee Williams cop drama Nighthawks (really, you should see it), I can’t help but feel like this installment takes its moniker from Edward Hopper’s famed 1942 painting instead. – FYI: The creepy medical examiner Betty Cooper visited in this episode (and one time last year) is named Dr. Curdle. Because this is Riverdale, after all. – For those at home tallying Jughead’s eating habits, let it be known that in this episode he ate at least one hamburger at Pop’s  — though probably Betty’s as well since she left — as well as consuming a non-descript baked good during his heart-to-heart with Veronica. (See below). – Reggie wearing a black hood to screw with Archie is most definitely something his comic book counterpart would do. – The award for creepiest shot of the night goes to this one of a Chok’litt Shoppe employee roller-skating through Fred’s blood, as envisioned by an increasingly unhinged Archie. – It’s worth mentioning that the just-released seventh issue of the excellent Riverdale tie-in comic gives some backstory as to what is up with Dilton Doiley. Spoiler alert: His parents made him extremely paranoid. This comic is in canon with the series, making a previous issue in which Pop Tate encountered an ageless man, probably the devil, who was passing through on his way to meet two women in Greendale (i.e. Sabrina’s aunts) very noteworthy in terms of how weird things may get in upcoming episodes. – Finally, Riverdale’s love of movies has never been more evident than in its closing scene tonight, a clear Zodiac tribute that replaced “Hurdy Gurdy Man” with another Donovan song, “Season of the Witch.” Does this mean that the hooded man is a serial killer like Zodiac? Oh man, I hope so.