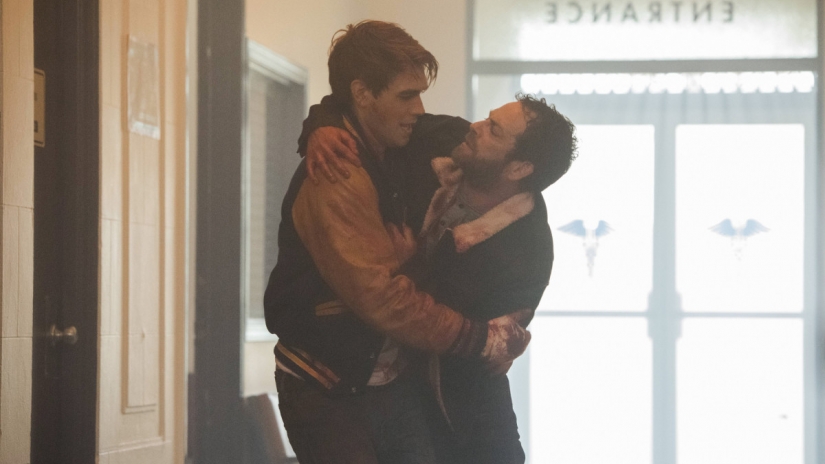 The Riverdale Season 2 premiere gets the Archie drama off to a captivating start. Spoilers ahead in our review…

With those words begins the second season of Riverdale, the CW’s bold and, at times, deliciously overwrought, drama based on Archie comics.

When last we saw our heroes, they were all facing the darkness that was slowly invading their small town. Fred Andrews (Luke Perry) had been shot and left for dead during an (apparent) robbery at Pop Tate’s Choklit Shoppe. Meanwhile, Jughead (Cole Sprouse) and Betty (Lili Reinhart) found their growing relationship threatened when the crown-wearing loner seemingly swore his allegiance to those ultra-ridiculous ruffians, the Southside Serpents. In more fashionable parts of Riverdale, Veronica (Camila Mendes) awaited the return of her father Hiram (Mark Consuelos, who debuts as the character in tonight’s instalment) from prison, while the ever-theatrical Cheryl (Madelaine Petsch) sets her swanky Thornhill manor ablaze as she baptises herself in fire to become born again following the murder of her brother at the hands of her (now also deceased) father.

All of these dangling plot points are immediately addressed in this rapid-fire instalment from series’ creator/Chilling Adventures Of Sabrina comic writer Roberto Aguirre-Sacasa. Over the course of a breathtaking 42 mins we learn that Archie’s father is hovering between life and death — having creepy visions of the future that he may never live to see. The most effective of these comes early in the episode when, while taking pictures at Archie’s high school graduation Fred casually remarks that “I didn’t think I’d live to see this day,” before being coldly informed by his son’s pals and gals that he didn’t. It is a genuinely chilling moment that speaks to Aguirre-Sacasa’s expressed desire to up the spookiness level of this season. While time will tell if the long-rumored appearance of Sabrina the Teenage Witch — a character who is getting her own show on the CW next year — will pop up during this season’s 22 episodes, Chapter 14: A Kiss Before Dying proves more than ever that indeed, when it comes to Riverdale, something wicked definitely this way comes.

The shockwaves of Fred’s shooting have immediate impact on the other characters as well. In the episode’s standout scene Veronica confronts her mother about whether or not she was involved in arranging the tragedy at Pop’s. As Hermione Lodge, Marisol Nichols again portrays her character as an absolute mystery whose true intentions are shielded by a cool exterior that still seems like it will break like a vase knocked off a table at any second. When Mr. Lodge does finally appear at the end of the episode, viewers can’t help but feel like even if Veronica’s parents weren’t involved directly in the act of violence against Fred Andrews then they at least know more about it then they are leading on.

As for the fan favourite couple known as Bughead, Betty confronts Jughead about his involvement with the Serpents, rightly remarking that the gang’s jacket fit him like a second skin. This, paired with the fact that Jughead is suddenly tooling around on his imprisoned father’s motorcycle like a refugee from The Wild One bodes trouble on the horizon for the young lovers… despite Jug’s assertations that he has no interest in being a Serpent. Wait and see on this one.

In the immediate aftermath of the Thornhill fire, Cheryl is more empowered than ever before. During a suspenseful confrontation in the hospital, she makes it very clear to her now-disfigured mother that the abuse of the elder Blossoms has come to an end and now she has control over the family. Of all the rotating plotlines of this episode, this is the one that feels rich with the most possibility as Cheryl is such a wild card of a character that it is hard to predict where this goes next.

Then there’s the matter of Ms. Grundy, who has moved to the neighboring town of Greendale. Here her student-seducing ways are put to a swift and shocking end by the same man who attempted to kill Fred. It certainly seems as if someone is targeting those close to Archie. Expect the questions of who and why to become this season’s “who killed Jason Blossom?”

If there’s a criticism to be had here, it’s that the ‘will Fred Andrews live or die?’ question gets answered a bit too quickly and neatly. But it also makes sense to not have plot this dragging on. The biggest problem with Riverdale‘s first season was that Archie was far too often sidelined in a show where we should have been the focus of attention. Emboldened with protecting his family at all costs now puts him front and center, allowing the show to do some course-correcting and making its excellent ensemble gel like never before.