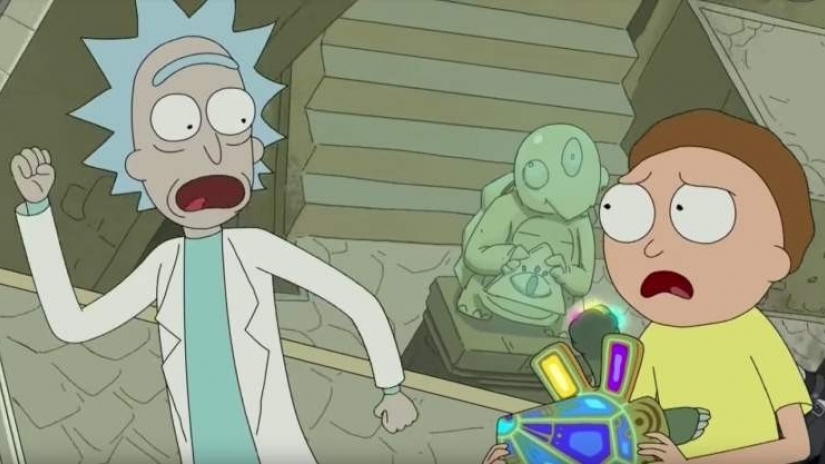 With season 3 being as excellent as it has been, the occasional goof-off episode doesn't hurt. Spoilers…

A major problem I had with season 2 is how so many episodes felt like goof-off episodes. There seemed to be little interest in developing the characters or multiverse in meaningful ways. Season 3 doesn’t have this problem; I mean, last week they convincingly built and destabilized an entire new society in 22 minutes. So, it’s okay that Morty’s Mind Blowers is a relatively incidental episode, content to pull off a bunch of good jokes and then close out.

It is a bit disappointing this takes the place of another Interdimensional Cable. Though it moves further and further away from it out of necessity, Rick And Morty’s foundation is built in part on Justin Roiland’s frantic, awkward ad-libbing. Interdimensional Cable was the show’s opportunity to periodically return to its roots, so it’s kind of sad we’re skipping it.

It was also an impressive trick to see how the writers would still manage to craft a decent storyline around the disconnected nonsense interstitials at the centre. Of course, this was executed far, far better in the first Interdimensional Cable. The overarching storyline in the second was a dick joke (a decent dick joke, but a dick joke nonetheless). Plus, the ad-libbed stuff appeared to be entering the realm of diminishing returns.

I admire the crew for recognising that the last one fell semi-flat and for not being afraid to try a different take on the Rick And Morty version of Treehouse Of Horror, rather than forcing out another episode on an established premise. If they’re feeling it next year, they can always bring it back (the ending of the episode maybe even hints at this potentiality).

With Morty’s Mind Blowers, we still get disconnected sketches with a wraparound narrative. It’s just that the sketches are now entirely scripted. Also, the storyline bridging them all isn’t to be taken too seriously. It’s built up like it could be a big deal, but then it’s just dismissed by Summer delivering a deus ex machina. (It’s a permissible deus ex machina because it works for both Rick and Summer’s characters that Rick would have a contingency plan, that he’d recognise the need to rope Summer into it, and that Summer would be able to handle it.)

We do get a greater understanding of just how fucked up and co-dependent Rick and Morty’s relationship really is, as well as how petty Rick can be. It’s hilarious that it’s so important to Rick that he not look stupid in front of Morty that he erases the time Morty learned that Rick thought the phrase was “taking things for granite.” Also, this isn’t a new revelation exactly, but the episode adds believability to the notion that, despite Rick being all-powerful, Rick and Morty’s adventures regularly spin out of control because, while Rick is brilliant enough to have multiple contingency plans, he’s also reckless and sloppy enough that Summer needs to turn to them with some regularity.

Regardless, the impact of this stuff is nothing compared to the moving story arc that ran through the original Interdimensional Cable, all the more moving because the payoff was preceded by sketches titled “Baby Legs” and “Ball Fondlers.” However, it’s not really trying to reach those heights. Frankly, Summer showing up to save the day at the end is fair enough; I can’t imagine how they could’ve organically restored Rick and Morty’s memory in full with Rick’s most lucid memory being that Men in Black 2 was a joyless cash grab (Rick harbouring vendettas for specific movies always feels as though it comes directly from Dan Harmon and it’s always funny).

Mainly it’s about the interstitials, which were all pretty solid, if they didn’t all make me laugh out loud. My favourites were Morty’s inability to quickly vomit up a demon worm, when Morty accidentally flips a switch that turns off life support for a whole room of people, and when Morty overhears the geopolitical machinations of a group of squirrels. (Tiny bombshell: the latter adventure apparently resulted in Rick and Morty having to take up residence in yet another reality.) Also, Morty once had to bury Santa Claus and another time he got engaged to Mr. Poopybutthole.

Another difference between Morty’s Mind Blowers and Interdimensional Cable is that each sketch can’t start with a completely blank canvas. Rick and Morty have to be at the centre of all of them, which, like the lack of ad-libbing, makes this a lot less of a freewheeling ride. Also, a good lot of these memories feature Rick berating Morty, which gets to be a bit much in places. Still, it’s a goof-off episode that mostly works. With season 3 being as incredible as it’s been so far, it’s okay to goof off once in a while.