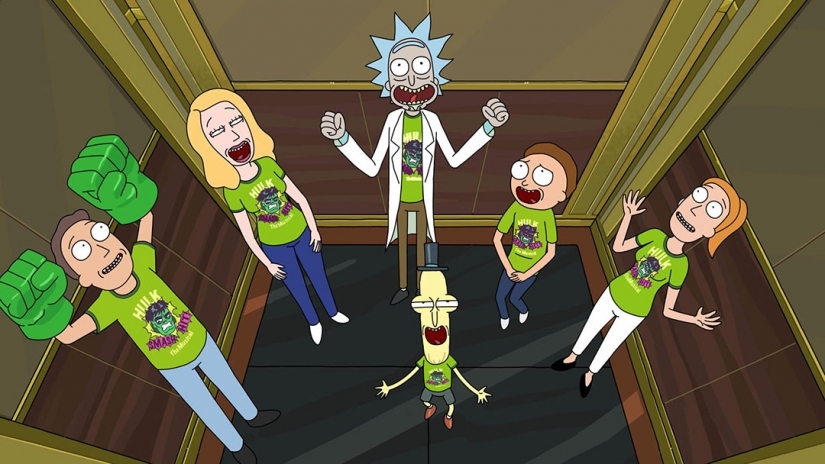 Season three is officially knocking it out of the park. This is another fantastic episode. It takes one of the most tried and true fiction plots out there and somehow takes it in wholly unexpected directions, plunging the depths of the characters’ psyches and cranking out top-notch jokes all along the way.

The premise here is Rick and Morty go on an emotionally-scarring adventure (Morty’s wailing actually made me feel for the little guy), so they decide to go for a (sci-fi) spa day. There, they try out a cognitive detoxing device that removes the toxic parts of themselves from their bodies, rendering them completely healthy people. Unfortunately, the toxic sides of Rick and Morty exist as walking, talking opposites who eventually manage to escape to Earth and yadda, yadda, yadda.

See, the thing about this plot is you’ve heard it all a million times before. Anything with a superhero in it, really any episodic fiction with sci-fi or supernatural elements, has at some point done a version of the “protagonist must fight evil/opposite version of themselves” story.  Even this specific version of it, where a character is split into good and bad sides that invariably must recombine feels pretty familiar (Dexter’s Laboratory had an episode like this!).

It’s a testament to the writing that this well-worn plot device feels fresh in Rick And Morty. The unique spin on it is Rick and Morty aren’t simply split into healthy and toxic versions, but rather they’re split into what their psyches perceive to be healthy and toxic. Therefore, even though Healthy Rick seems like a far more pleasant person to be around than Toxic (or even regular) Rick, he views emotional attachments as a toxic element. This, somewhat paradoxically, makes Toxic Rick a total bastard who won’t let anything bad happen to Toxic Morty.

We spend most of the episode with Healthy Rick and Morty and it’s amazing what a simple joy it is just to watch the characters behave so differently. Rick is usually such a prick, so it’s fun to see him being sweet and polite and saying “excuse me” after he belches. There’s nice little touches to his animations too, like when Morty enters the garage and Rick smiles kindly, instead of getting immediately annoyed.

Morty really gets to shine in this episode as we spend a lot of time with him away from Rick. This is Healthy Morty, whose self-doubt and loathing have been stripped away. This makes him so confident he scores a date with Jessica no problem, but it also turns him into a yammering, new age-y blowhard, which turns Jessica off. This series always takes its concepts further than expected and I love that Healthy Morty’s natural evolution is to become a high-powered businessman because, isn’t that what all these guys are? Confident, full of advice on being your best self, and utterly insufferable.

Rest And Ricklaxation is chock full of great jokes, too. Mr. Goldenfold doesn’t get mad at Morty for making a joke about him in class because “it seems to represent a positive change for your character.” There’s the girl who wishes she could just take off her silly hat and be herself. Morty whisks it off her head and, regarding herself in the mirror, the girl declares “There you are!” There’s also inspired visual gags like the Rick babies that pop out during Healthy Rick and Toxic Rick’s fight. And I predict that “You can’t keep the drones” is going to be a fan favourite.

I’m starting to feel like a hack awarding perfect score after perfect score to these season 3 episodes one after the other, but I can’t find anything Rest And Ricklaxation does worse than the episodes before it (in fact, I think it’s more solidly plotted than The Whirly Dirly Conspiracy). It also showed us sides of the protagonists that we’d never seen before and, even more surprisingly, added depth to Jessica and Morty. What was previously a largely baseless crush that the series regularly seems to forget about now seems like an indeterminate, but interesting relationship worth exploring in future episodes.