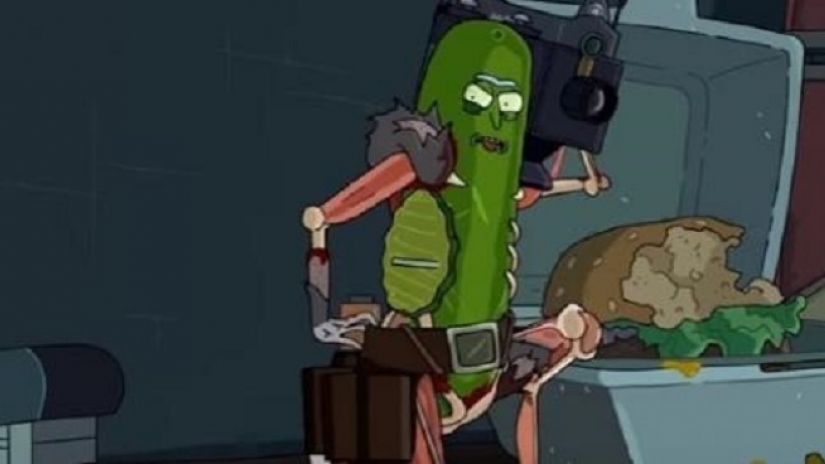 It's…Die Hard with a pickle on the latest episode of Rick and Morty season 3. Spoilers…

Everything’s been leading up to this. It’s the reason we first emerged from the primordial ooze to walk upright. The trajectory of the human race has been forever leading, inexorably, to this moment, our denouement: the “Pickle Rick” episode of Rick And Morty.

And was it worth the wait? How did it turn out? Well, quite good, though it went more Die Hard than I expected.

Not that that’s a bad thing; if you’re going to do an episode in the style of an action movie, there are few better films to emulate. It’s just, if you’ve followed Dan Harmon and his career to this point, you know Die Hard is his favourite movie and that he’s already paid homage to it some with the Community episode Modern Warfare. Pickle Rick is a very different beast, but I have to admit to feeling a small tinge of disappointment when I realised Harmon was drawing from the Die Hard well again.

However, that was basically my only problem with Pickle Rick. Otherwise, it’s a super-engaging episode with a charmingly stupid concept that develops into an absurdly overblown, kinetic action movie plot.

I don’t regularly mention the animation but it’s easily the coolest aspect of this episode. The highlight is the slice-and-dice goriness of Pickle Rick administering justice to a horde of rats, brilliantly staged and fluidly animated so that it’s easy to follow and a lot of fun to watch. Rick offing ‘Russians’ (they’re never explicitly labelled any nationality, but we know they eat cold soup) and his duel with Jaguar (Danny Trejo) look similarly awesome.

The defining feature of season three thus far has been insane, overstuffed plots that, against all odds, end up being extremely tight and making total sense. As I understand it, Pickle Rick was conceived of as a joke, a concept too stupid and inane to actually pursue. However, it’s handily explained away when we learn Rick did it to get out of going to family therapy (Rick also says he did it to challenge himself, which is probably to some extent true as well).

How the action escalates also feels logical enough. Rick is batted off his workbench by a cat, washed into a storm drain, makes a mobile murder pickle suit out of rat and cockroach parts, etc., etc. By the time he’s battling an action hero cliché who just wants his daughter back, we’re already on board, having been led there by previous developments.

It felt like so much had happened I was genuinely surprised how much time was left at the end for all the closing therapy scenes. Arguably Dr. Wong (Susan Sarandon)’s monologue was a bit too long and on the nose, but I overall appreciated that Pickle Rick closed out with two very slow-paced scenes. It was a nice breather after all the madcap nonsense that came before. It was also quietly devastating how Morty and Summer both hope they’ll get to go back to therapy, but Beth and Rick have chosen to act above it all.

Mostly Pickle Rick functioned for me as a killer action episode. There were more lines I acknowledged as especially clever, rather than laughed out loud at. For example, it was quietly brilliant once we could connect the dots of why Dr. Wong’s motivational poster represented eating a hot dog as courageous. Rick’s retort to Jaguar that his downfall will be “not being open to new experiences” is just a goddamn good action hero quip. My favourite joke was Summer’s breakthrough that she hopes “to be seen one day as someone that just likes getting high.”

In the end, Pickle Rick basically lives up to the hype. It was a fun, cool-looking episode, with, yet again, a stunningly cogent storyline. It didn’t quite reach the heights of the season premiere, which is still currently the gold standard of season three, being nowhere near as funny, but it certainly excelled when it comes to fast-paced gory murder and familial dysfunction, which are important Rick And Morty components too.