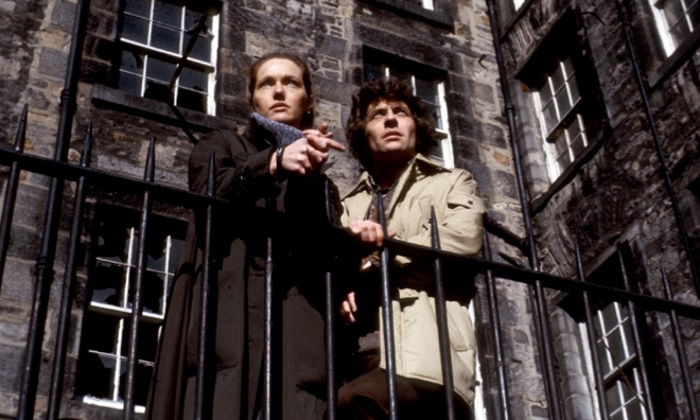 A salute to The Omega Factor, a seminal 1970s sci-fi TV series that paved the way for many more to follow…

One of the funny quirks about Scotland is that everyone can name a Scots actor, but very few can name famous Scottish TV shows. Beyond the standard native fare of cop shows and comedies, Scotland’s televisual output is well below its literary or film standing.

Of course, there’s Take The High Road (And if you get that reference, dear reader, you can mournfully reflect that you’re as old as me). But there are a few surprising gems beyond the cliched obsession with the Jacobites and Highland allure (ahem, Outlander).

In 1979, and all too briefly, The Omega Factor was BBC Scotland’s paranormal, Edinburgh-set drama. The series, as was so typical of (nearly) every show now considered iconic for the era, only ran for ten weekly episodes between the 13th of June and the 15th of August.

What’s incredible about The Omega Factor is just how much of a forebear it is to the best, and most ubiquitous, science-fiction on TV today. The plot is a familiar one: Journalist Tom Crane (James Hazeldine) possesses psychic powers that bring him to the attention of an unofficial secret Edinburgh-based government organisation.

The shadowy Department 7 investigates paranormal phenomena and the potential of the human mind. Episodes explored hypnosis, brainwashing, extra-sensory perception, telekinesis, poltergeists, out-of-body experiences and spiritual possession. Considering the rampant paranoia about governments of the day, the Cold War and proven instances of government experimentation into the paranormal, the series had a hard-hitting feel that still feels like it has something to say about the era. Crane joins Department 7 as a means of finding and getting revenge on Edward Drexel (Cyril Luckham), a rogue psychic who is responsible for the death of his wife in a car accident. Using his own psychic powers and his work on the inside of the department, Crane suspects a conspiracy by an organisation called Omega to take over the world and make full use of ‘The Omega Factor’, something they’ve defined as “the ultimate potential of the human mind”.

The members of the department include physicist Dr Anne Reynolds (Louise Jameson), an old friend of Crane’s wife, and the secretive head of the department, psychiatrist Dr Roy Martindale (John Carlisle).

Most episodes see an increasingly obsessed Crane in conflict with the cautious Martindale with Anne caught in the middle. Various subplots develop over the course of the series – notably Crane’s hunt for Drexel, his growing suspicions about the Omega conspiracy and his developing relationship with Anne and increasingly more violent encounters with the paranormal.

With such broad themes, the show’s surprisingly consistent for a show that could have gone ‘bad guy of the week’. Rewatching it now, it’s very telling how everything from modern Doctor Who to Star Trek: Discovery is relearning the benefits of the smaller story scale on which The Omega Factor thrived.

What’s key to understanding the show’s novelty is also the reason it was cancelled. From its eerily, terse opening psychedelic soundtrack by Anthony Isaac to the brutality of its content, it actually deserved its reputation as maybe pushing the boundaries too far with its subject matter.

One episode in particular, Powers Of Darkness, stuck the knife in and was both a cumulative reflection of the series’ themes but very much the reason behind why it was never renewed. Even now, the episode is shocking: it featured people burning alive, knife violence, hypnotism and a sincerely dark and indulgent look at the occult and devil worship.

In the 1970s, Mary Whitehouse fronted a highly active and vocal lobby group called the National Viewers and Listeners Association (NVLA). The organisation will be familiar to fans of a certain Timelord because she was integral in its cancellation. The group, although much-mocked for its public complaining about sex, violence and blasphemy on television at the time, held significant clout in eyes of TV executives.

Whitehouse was quick to express her outrage at Powers Of Darkness, and she protested to the BBC that the episode breached their content guidelines. She branded it “thoroughly evil” because it portrayed hypnosis, the supernatural and a man burning to death in graphic detail for the time.

At the time, Whitehouse’s moralising was a right of passage in producing what might be considered challenging television, but for once she got it pretty on the jaw. The BBC openly acknowledged that the episode breached their guidelines for content for what was acceptable to show before the nine pm watershed. Producer George Gallaccio was reprimanded and not only did the series not get commissioned for a second season, but it was also never repeated on British television, never released on VHS and just resurfaced on DVD in 2006.

The worst of it is, The Omega Factor doesn’t even hold notoriety as the go-to place for some seriously retro science-fiction. It very much disappeared and unfairly cast by the wayside in the story of science-fiction and fantasy on television. In many ways, it’s the grandfather to shows and formulas which now taken for granted. Its closest living descendant today would be The X-Files, but even a connecting line can be drawn to the retro homage of Stranger Things.

Although Stranger Things creators the Duffer brothers have acknowledged the debt and influence they owe to the likes of Steven Spielberg, John Carpenter, and Stephen King, one has to wonder if they ever came across The Omega Factor. A secret organisation, gifted individuals, and a small town feel about it that just happens to be terrifying all sound very familiar. In the case of a retro show, it’s the chicken and the egg, but the parallels are striking.

If it’s too bold, however, to claim that The Omega Factor was the first to mainstream the detective, paranormal formula then it’s irrefutable that its zany psychic niche, mad science and shady government departments laid a seminal marker for the decades to come. Indeed, in the realms of the BBC, it was a lightbulb moment for gambles they were to take later on: Crime Traveller, Bugs and even Torchwood indulge the science/fantasy/detective mesh with a healthy dose of bureaucratic meddling.

We tend to ignore now that budget constraints necessitated smaller storytelling but, with that opportunity came the chance to focus on character and plots in a more nuanced plot form. In many ways, The Omega Factor predicted the 90s and the rise of episodic, occasionally serialised, science-fiction formats like The X-Files or Star Trek. Looking back on it now, however, is like revisiting the original Doctor Who: it won’t long survive the attention span of audiences expecting the fast-paced, high-octane thrillers that are churned out on a weekly basis.

Has it aged well? In truth, everything from the 70s has a rustic low-production charm. Unlike most BBC programmes of the day, the series was mostly shot entirely on videotape (as opposed to the then-common practice of using film for exteriors). Rewatching the series and it’s still an enjoyable deluge of late-70s weirdness made all the better by its Edinburgh setting (the real-life home of horror and ghostly mystery couldn’t have been a better choice). For the pleasure of seeing Edinburgh used to such aplomb is compelling enough viewing, and it’s well worth playing spot the location with Google to hand.

The Omega Factor isn’t the easiest watch, but given the show’s relatively short length it does an excellent job of showcasing the merits of ‘the cheaper the budget, the scarier the idea’ model of the BBC in the 70s.

Does it have a future? Big Finish released a series of audio dramas serving as the second season of sorts set thirty years since Tom Crane left Department 7. Reynolds, with a returning Jameson, now runs the operation, and for three decades “their enigmatic nemesis Omega has been silent”.

James Hazeldine’s death in 2002 is the elephant in the room absence, but the spirit with which they’ve carried on the series takes stock of this and honours its departed lead actor. The audio dramas have received widespread acclaim, and perhaps fill a suitable gap in the market for audiences now weary of mainstream sci-fi saturation. The next season is being released in 2018.

The Omega Factor bookends a decade that seemed obsessed with parapsychology, the paranormal, the occult and pushing the boundaries of what was acceptable to show on screen. It is, however, a fantastic accompanying piece if you’re not in the mood for The Exorcist for the tenth time and you want something to watch with a paranormal flavour that isn’t The X-Files.

It’s small-scale, weak in places, but like all good BBC television had an interesting premise, solid cast and is entertaining indulgence to push through in a weekend.