Revisiting the film of Stephen King’s The Lawnmower Man 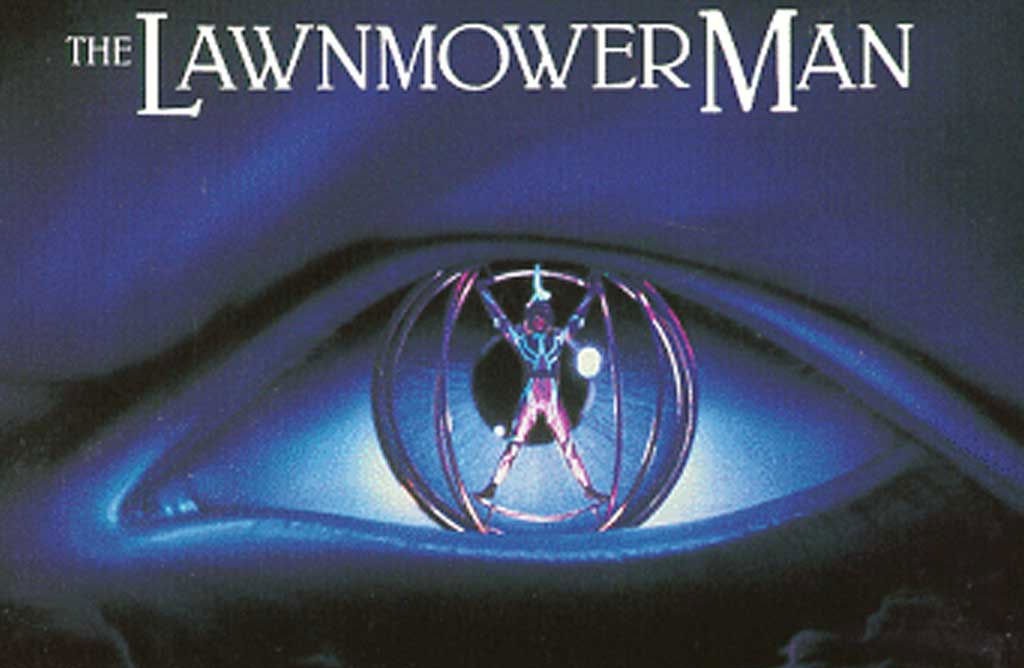 The film that Stephen King insisted his name be taken off. It's The Lawnmower Man…

The film: Dr Lawrence Angelo (Pierce Brosnan) is at the forefront of research, using virtual reality and drug combinations in an attempt to increase intelligence in primates. When it all goes wrong, he turns to an intellectually disabled man, Jobe (Jeff Fahey), and promises him intelligence in return for his role as a human test subject. Naturally, it all goes a bit awry when Jobe succeeds beyond Angelo’s wildest dreams. Oh and Dean Norris adopts a weird, clipped accent and is nefarious.

The Lawnmower Man did not start out life as an adaptation of Stephen King’s folksy short story of the same name, but rather as a screenplay called Cyber God, written by Brett Leonard (who would go on to direct) and producer Gimel Everett. New Line Cinema then decided that, as it had the rights to the short story, it would blend Cyber God with some of The Lawnmower Man’s ideas and take it from there. The problem is not much of King survives (the title and one scene with a telekinetically controlled lawnmower) and the two stories have almost no thematic crossover. Not that that stopped anyone.

King would eventually and understandably sue New Line to get his name taken off the title, which was originally Stephen King’s The Lawnmower Man, and disowned the film outright. There are a couple of elements here that could be loosely called King hallmarks, such as the abusive father, but the presence of Virtual Space Industries’ experiments removes it from the author’s more everyday approach to horror. What it is, though, is a prime example of some early 90s bonkers. It doesn’t start well for The Lawnmower Man. ‘Millennium’ is spelled wrong in its opening exposition card and that sets the haphazard tone for the rest of the film. The admittedly few King elements don’t gel well with Leonard and Everett’s VR morality tale and it sort of meanders along at a weird, slow pace until we get to the finale when it all goes a bit mad. When Angelo decides the human subject should be Jobe, it briefly looks like there could be a comment on the class system at play here, in which industry exploits the labourer, but that falls by the wayside almost immediately.

Probably the film’s strongest element is in the visual design of its virtual reality technology. Though the VR effects look pretty hokey by today’s standards, it’s a fun time capsule of how the technology was imagined and created. The set design in the real world works less well. Virtual Space Industries looks like it was decorated by Otho from Beetlejuice. Everything is very angular and blue because, of course, nothing says futuristic like lots of squares and bad lighting. It does provide a nice contrast with Jobe’s side of the story though, which is a slightly wealthier version of King’s usual Americana. Brosnan is in his pre-Bond post-Taffin days, so it’s lacking in mad line deliveries, but lots of emotional running of fingers through his luscious black locks. He gets to say some truly amazing lines – “His mind is like a clean, hungry sponge” – and commits wholeheartedly to the film with more gravity than it earns. Fahey gets slightly more to do in his transformation from gardener to god. We know Jobe is getting smarter because he stops wearing his dungarees normally and just takes his shirt off instead. He also brushes his hair for what looks like the first time in his life and buys a really tight pair of jeans. Good for Jobe.

The Lawnmower Man, though, is not good. It veers wildly between the kind of entertaining bobbins you’d happily sit down to watch with a beer and a calorific takeaway to something so dull, you start actively wishing the film along to get to the bits where Jobe murders everyone. And when Stephen King, he of Maximum Overdrive, doesn’t want his name attached to it, it’s probably a fair warning that it’s not that great. Scariest moment: It would be a cheap joke to say the virtual reality special effects, but the cyber sex scene has literal face-melting so I’m going to go with that. Or perhaps Brosnan’s earring.

Musicality: Dan Wyman’s score is great to listen out for the moments where he wants you to be worried about something, all accompanied by a ‘DUN’ noise. Bomb? DUN. Telekinetically controlled lawnmower? DUN.

A King thing: Unfaithful adaptations. As evidenced by the films explored so far in this revisit, it’s somewhat of an understatement to say that adaptations of King’s work vary massively in quality. Fidelity to the source material is also a fairly fluid concept when it comes to King adaptations, sometimes necessarily, sometimes not. The Shining is probably the most infamous example of a King novel altered in its journey to cinema, much to the disgruntlement of its author, but The Lawnmower Man really takes the cake.

Join me next time, Constant Reader, as we meet the Sleepwalkers.