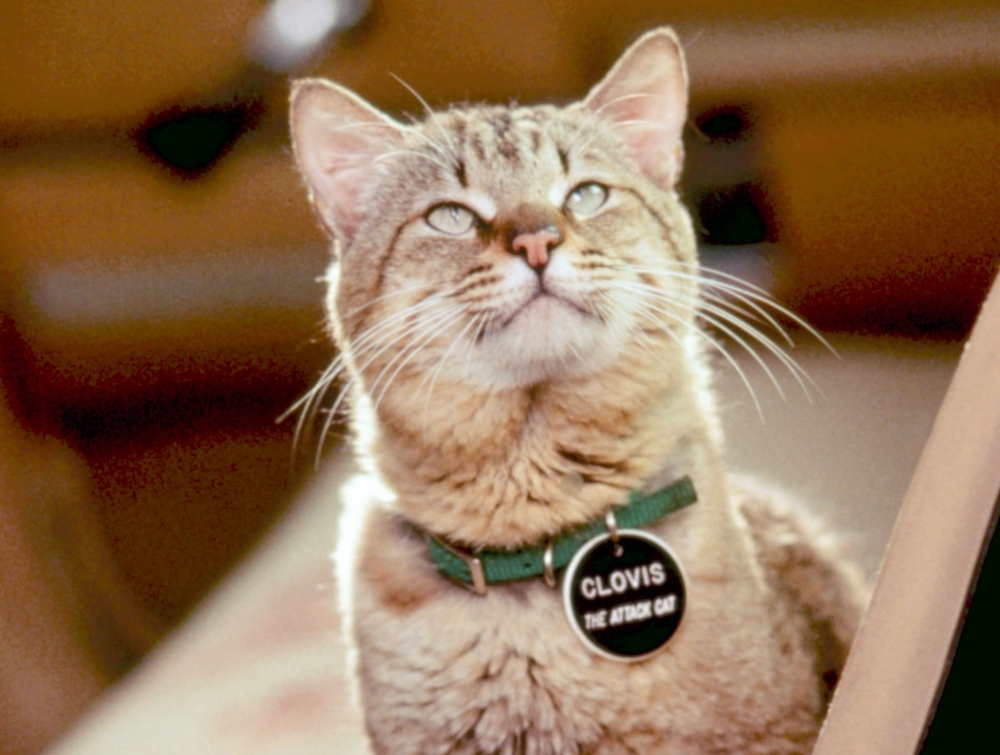 Our Stephen King screen lookbacks arrive at Sleepwalkers, a movie based on an unpublished short story…

The film: Charles Brady (Brian Krause) and his mother, Mary (Alice Krige) are sleepwalkers, which are a sort of werecat vampires who feed on virgin women in order to survive. The only things that threaten them are cats, who show up wherever they go. After draining a girl in Bodega Bay, they set up residence in Travis, Indiana with their sights set on local teen Tanya Richardson (Mädchen Amick) for their next feed. Mary is one mother you don’t won’t like when she’s hangry.

In a slight difference from other films featured so far, Sleepwalkers is based on an unpublished short story by Stephen King and the man himself is on screenplay duties here. Mick Garris directs his first King project of several that he will be involved in over the course of his career, most recently a mini-series adaptation of Bag of Bones. They’re a good pairing here, producing what might not be, to say the least, a tonally coherent film, but it’s certainly great fun.

The opening sequence is probably one of my favourites in the vast spectrum of King films; we start in the Bradys’ previous home, surrounded by displayed dead cats and currently being searched by cops (look out for an uncredited Mark Hamill). They find the body of a young girl, drained of life. The sombre atmosphere leading to a jump scare sets the first half’s tone perfectly as well as establishing a certain moody Gothic sensibility.

Garris plays with a sense of tragedy and isolation at first. We know the Bradys are a bad sort from the dead girl and cat murder, but we also learn that they spend their lives constantly on the run because of who they are. Charles worries that they might be the last. Their incestuous relationship feels both icky and tragic; they literally only have each other. For moments here, Garris and King offer glimpses into a miserable kind of life, tapping into the same kind of despondency towards immortal life that Anne Rice mines in Interview With The Vampire. But then comes the turning point at the Homeland Cemetery in which Charles reveals his true self to Tanya. Cue everything going a bit bonkers. There’s a glorious scene of cameos, where Stephen King appears as the cemetery caretaker, keen to point out he’s not to blame for the incident to both Tobe Hooper and Clive Barker (John Landis and Joe Dante appear briefly in the film too).

It’s as if King and Garris got bored and decided to turn the dial to Bugnuts Crazy for the finale without going through any of the other stages first. In its own way, that’s pretty in keeping with classic Gothic texts, where all sorts of manic activities take place unexpectedly, so it’s not hard to see how King makes the leap. And then we’re into the home stretch. Charles is weakening after an attack from Clovis the cat and hero of this film. So his mother decides to sort the whole thing out herself with a liberal application of red lipstick and a murderous sensibility.

Mary’s resourceful, using a corn-on-the-cob to stab a deputy in the back. The sheriff gets impaled on a fence. She even twists Ron Perlman’s arm to breaking point and then hits him in the face with it. How can you not love that? It’s almost a shame when the inevitable happens and Tanya wins because Krige’s brilliantly unhinged performance is the highlight of this half.

It’s hard not to wonder what Sleepwalkers might have been like had it kept up with the subdued and macabre atmosphere. There’s an interesting tragedy at play in the characters of the Bradys. But, I’d be lying if I said I didn’t love the way it does go. Sometimes, you just need carnage.

Scariest moment: The jump scare in the opening scene got me hook, line, and sinker. It’s a relatively cheap moment, but hey, it worked. Musicality: Enya’s track Boadicea is used as a theme for the film and it works so well in the general moodiness of the early scenes. Also, Sleepwalkers contains one of the best uses of ‘Do You Love Me’ outside of Dirty Dancing when Tanya dances round to it at work.

A King thing: Mothers. Mothers come in all shapes and sizes across King’s world. Some are the good kind, out to protect their family or flock any way they can, like Wendy Torrance or Mother Abigail. Others are monsters, be it in human form like Margaret White or a gigantic Lovecraftian monstrosity in Revival. Mary Brady might be trying to protect her son, but doing that as an incestuous, homicidally-minded werecat places her firmly in the monster side of things.

Join me next time, Constant Reader, for Pet Sematary Two.