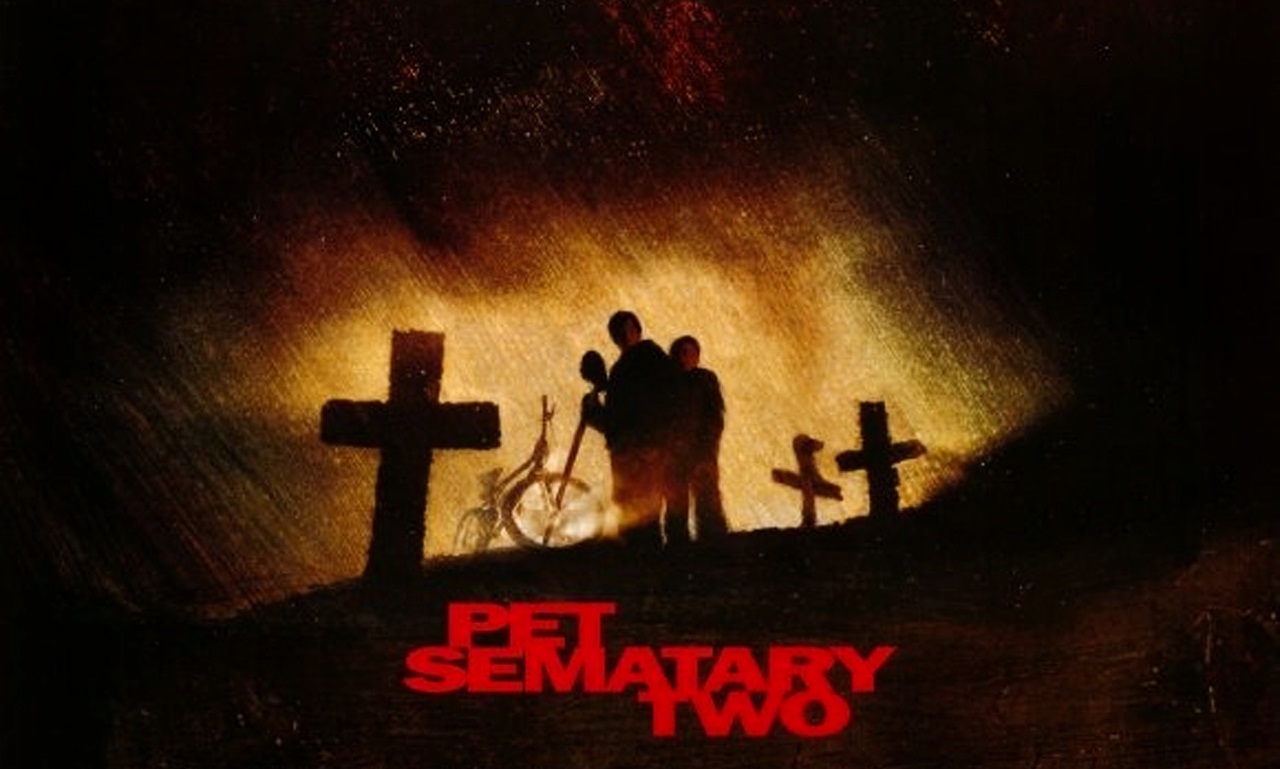 The film: Jeff (Edward Furlong) watches as his actress mother Renee (Darlanne Fluegel) is killed in a tragic accident on set. After the funeral, Jeff and his father Chase (an impressively turtlenecked Anthony Edwards) take up residence in her hometown of Ludlow, Maine to recover. Jeff befriends the stepson of the local Sheriff Gus (Clancy Brown) and learns of the history of the Creed family and their unfortunate demise. When Gus kills his stepson’s dog, Jeff goes with his friend to the Micmac burial ground, unleashing the menace that lurks in the reanimated dead once more.

Following the success of Pet Sematary, Paramount were keen to capitalise by putting a sequel in motion. Director Mary Lambert was a huge part of that previous success and so she was brought back to direct, working with an all new set of characters in a screenplay from Richard Outten. In this new story, the events of the Creed family tragedy have begun their journey into local legend, details embellished to scare new arrivals to the town. In turn, ‘go bigger’ seems to be the theme for this sequel; every aspect the first film is retooled and dialled up a notch or two. The success of Pet Sematary in both its film and book versions is that they focus closely on the Creed family to an intense degree. As a result, the audience is uncomfortably close to everything that happens to them. In the sequel, Outten goes much broader, widening out the narrative from one family to include another one and a school bully for good measure. Lambert had originally intended her next film to be a direct follow-up about Ellie Creed, Louis’ daughter and the only survivor from the first movie, but the studio weren’t too keen on placing a teenage girl front and centre of their big follow-up (because of course).

The problem is that in going large, Outten’s screenplay ironically leaves Lambert with very little room to manoeuvre. The tension that she captures so brilliantly in the first film is absent here because a discerning audience already knows the havoc that the burial ground can reek and what Jeff’s knowledge of it will eventually lead to. The film also feels at odds with itself. On the one hand, it’s a story exploring how a teenage boy overcomes the grief of his mother. On the other, it’s a blood-splattered zombie movie where the undead aren’t mindless, but focused on killing as many people as possible. The smaller violent acts in the first film were often used as a brief tension break before ramping up to the climactic murders. Lambert built that atmosphere beautifully and used the violence as moments of punctuation rather than a constant. In the sequel, violence abounds right from the start with Renee’s death and doesn’t let up much from there. I’ve never been particularly squeamish when it comes to movie gore, but there has to be a point to it other than to simply make you feel a bit ill.

There’s a real cruelty to the deaths here, beyond the usual horror fare or the inherent tragedy that the first film captured. It feels as if the story starts revelling in the prospect of a sensationally violent death rather than mining any emotional value from it. When there’s a close up of a drill grinding its way into someone’s shoulder and you feel grossed out but not particularly concerned, something has gone wrong.

Partly this is to do with the central performances. Unlike the Creeds, the audience isn’t afforded any time to get to know the Matthews family before their tragedy strikes and so the sense of loss doesn’t land in the same way. Furlong’s embodiment of grief amounts to looking sullen for the majority of the film and delivering dialogue in a manner so flat, he may as well have been horizontal. Edwards doesn’t fare too much better as his concerned father, looking thoroughly unbothered by everything. There are bright spots in there. The make-up effects for the walking dead people are suitably gruesome with a side of nauseating. Clancy Brown’s performance as pre- and post-deceased Gus might feel like it comes from a completely different movie to the rest of the cast, but he manages to hop between the two contrasting tones and have fun doing it. He also gets a neat reference to The Shining when Gus bashes down a door with a hammer and pokes his through the broken planks.

Pet Sematary Two is a curious beast because it’s a film which feels both radically different and too similar to its predecessor. King would remove his name from the film before its release and though it isn’t the departure from his work that say The Lawnmower Man was, this sequel loses what made its predecessor special. Occasionally, Lambert recaptures the melancholic atmosphere of Pet Sematary, but too often lets it go in favour of a Grand Guignol style that jars with what the other half of the movie is trying to do. It’s certainly a case of when bigger fails to mean better.

Scariest moment: Dead Gus uses school bully Clyde’s dirt bike to carve out the side of the teen’s face. It’s a nasty, lingering moment that almost gives you your own face ache.

Musicality: Mark Governor’s score doesn’t capture that same blend of childhood nursery rhymes and the macabre that Elliot Goldenthal’s did, but it is one of the film’s stronger elements. It’s especially good at capturing the melancholic tone that flits in and out between the bigger moments.

A King thing: What to pick? Outten seems to throw the proverbial King kitchen sink. We’re back in Maine, of course. We’ve also got an abusive father, a well-meaning protagonist who makes stupid decisions, a psychotic dog, school bullies, friendship through adversity, and a boatload of grief. Phew.

Join me next time, Constant Reader, for another sequel, Children Of The Corn II: The Final Sacrifice.