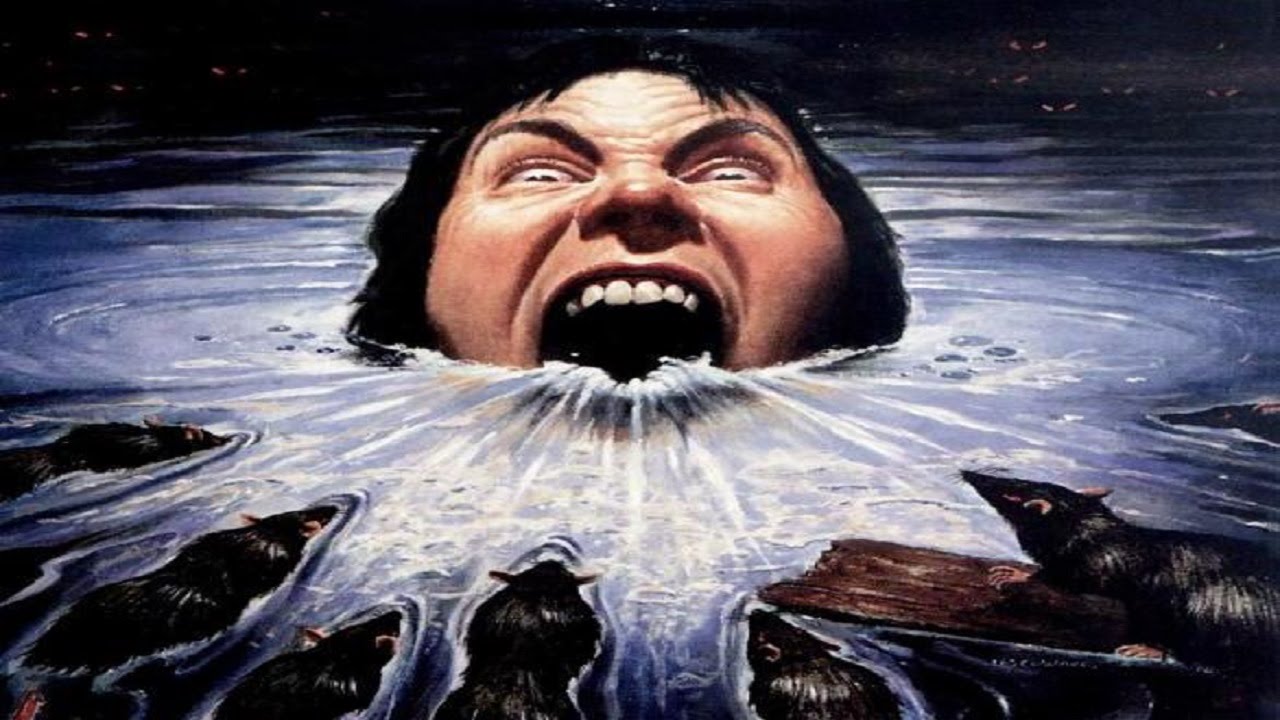 The film: An abandoned textile mill has been re-opened, but is infested with rats and has a basement full of junk that needs clearing out. Tempting a group with double pay, foreman Warwick (Stephen Macht), pronounced ‘War-Wick’ by everyone in the film, gets them to start cleaning out the basement. Newcomer and seemingly professional drifter John (David Andrews) is part of the group that discovers rats may not be the only thing infesting the tunnels beneath the mill.

Graveyard Shift is adapted from Stephen King’s short story of the same name, which appeared in his Night Shift collection. John Esposito is on screenplay duties here, taking a claustrophobic story about mutant rats and crafting a movie about a tale of old horrors, blue collar strife, and small town politics. It’s a valiant effort and it’s easy to see where Esposito and director Ralph S. Singleton are trying to go with it, but as has often been the case in these adaptations, it’s not that successful.

The film starts well, beginning with the kind of cold open that shows like Supernatural would go on to perfect. It’s a sweaty summer night in Maine and the graveyard shift guy is doing his job, surrounding by the rats that call the mill their home. The guy messes with them by throwing a rat into the machinery, only for something monstrous to show up and do the same thing to him. We don’t see much, just the wool turning scarlet red with blood and a mangled limb on the floor. Unfortunately, it’s mostly downhill from here. Put simply, it’s dull. The characters are barely given more development than their allotted archetype allows, which means there’s no real emotional hook for the audience to hang on when the scares arrive.

David Andrews is saddled with what amounts to a blank slate in drifter John Hall and he does little to give the character any charisma or sympathy beyond us finding out he’s a widower. Stephen Macht gets a good, near-Dickensian bad guy to play with and chews through scenery with a suitable amount of enthusiasm, but that’s about all there is to War-Wick.

As with most of the lesser King adaptations seen in this series, the commitment to gore is nevertheless strong. Whether it’s the blood soaking into the wool in the machinery or someone getting their arm torn off by something in the walls, there’s a gleefully liberal use of red spatters. The film also hides its monster, a giant bat, for the most part, utilising close ups to shock and cutting away to the devastation it leaves. This is probably because when the giant bat does show up, it looks a bit like a vertical hammock and is somewhat underwhelming.

There is one shining light in the darkness though. A beacon of bugnuts crazy in a boiler suit. Brad Dourif plays a character called The Exterminator. He is, as you’ve probably guessed, an exterminator. He’s easily the best thing in the film, swaggering about with water hoses and an attitude that treads a fine line between efficient and psychotic. His big scene with John is one in which he relates a tale of a soldier in Vietnam being tortured to death by a rat that’s forced to eat into his stomach. Dourif just goes for it. He uses that half wide-eyed, half squinting stare of his to glorious effect, his accent thick to the point of becoming authentic frontier gibberish. At one point, a tear even trickles down his cheek. It’s a scene stealer and nothing stands a chance of living up to him.

This is one of those occasions where I wish Esposito had gone even more leftfield in his adaptation. Forget Hall, forget War-Wick; the Exterminator is where it’s at. Why not have a whole film of Brad Dourif hunting down giant bats, spitting in cans, and telling mad-eyed stories about the war? It might have gotten old quickly, but it would have been a damn sight more entertaining. Scariest moment: Not a fan of spiders? Avoid the bit where Brogan walks through a cobweb and finds an eight-legged fiend crawling across his eye. Eurgh.

Musicality: The end credits music is… different. Dialogue from the film is played over some industrial-sounding percussion and a funky bassline. I’m not saying we should be too conventional in our musical choices for credits, but I think there’s a line.

A King thing: The drifter. There are a few of these dotted around King’s work; sometimes they’re heroes, sometimes villains, sometimes both. John Hall is a good audience entry point into the internal politics of the mill workforce he joins and is handily able to stop the giant bat thing too. Just a shame about the lack of personality here.

Join me next time, Constant Reader, for an encounter with It.