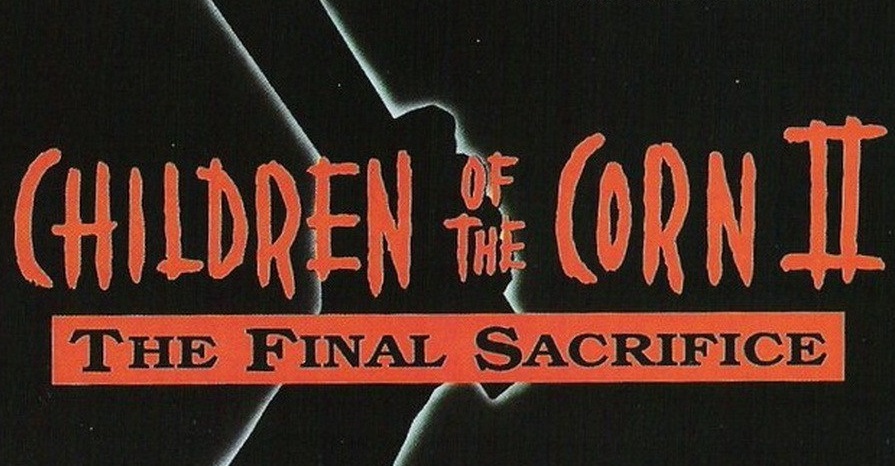 One of the more interesting aspects of these revisits so far has been how the sequels to different films have adapted to work without source material from Stephen King (Creepshow 2 aside). Mostly, they’ve not worked very well, but the Children Of The Corn franchise seems very determined to see if it can succeed in its seven further instalments. I like a challenge and have a morbid curiosity when it comes to these movies so I shall be watching all of them. Ask me again after the eighth Children Of The Corn movie as to whether this was a good idea or not.

The Final Sacrifice, which would turn out to be something of a misnomer, arrived in cinemas eight years after the original film starring Linda Hamilton. Screenwriters AL Katz and Gilbert Adler decided to continue the story of the Gatlin children rather than branch out into new territory. For the most part, this proves to be a good move, allowing them to build on the already established myth of He Who Walks Behind The Rows.

In the first Children Of The Corn film, the tension that could have been created when the deserted town was discovered didn’t last, dissipated by the fact the audience had already seen the massacre of the adults. The film then spun its wheels until its characters had caught up with their more knowledgeable viewers. The second film works better by navigating that dramatic irony more successfully. It fires out warnings of the eventual violence rather than presenting it straight away; the discovery of the Gatlin corpses at the beginning of the movie acts as an omen that all but a couple of characters ignore.

The central partnership that forms the entry into this homicidal and cornfield-obsessed world is also more effective. The film manifests the children’s conflict with the adults through a focus on the fractured relationship of Danny (Paul Scherrer) and his journalist father John (Terence Knox), a traditional tale of estrangement following John’s separation from Danny’s mother. The film then splits between the two of them as John continues his investigation with local academic, Dr Frank Redbear (Ned Romero, easily the best thing in the film) while Danny finds himself caught between a burgeoning relationship with local girl Lacey (Christie Clark) and the creepy children in the cornfield. John and Redbear discover that last year’s crop of corn is infected with a toxin that could cause hallucinations, especially in children. It’s here that the film starts to weaken from a reasonably strong first half. At first, it seems the poisoned corn is going to be a rational explanation of what happened in Gatlin, but then that turns out to be a town conspiracy to increase profits. And just like that, the plot point is dropped in favour of the supernatural. It’s a clunky diversion and one that doesn’t feel all that necessary to where the film goes next.

The carefully coordinated death scenes also take a turn into the ludicrous. The first two murders are great little moments of horror that add to the general creepy atmosphere rather than distract. However, later murders, both successful and attempted, border on the ludicrous, puncturing the sense of menace that preceded them. Runaway combine harvesters are a bit too lumbering to feel anything other than silly. The performances seem to get dialled up a notch too, particularly Wallace Merck’s overly dastardly Sheriff and Ryan Bollman as the possessed Micah. All that being said, I was surprised to find that I enjoyed this more than the first Children Of The Corn movie. The concept of the hidden menace within a new town was utilised well, at least at first, and more effort was made to allow the audience to get to know the characters and use them to propel the story along rather than simply descend into immediate carnage. Given the reputation of the sequels, I fear it may all be downhill from here.

Scariest moment: Killing schoolteacher Ruby Burke by lowering the hydraulic system holding up her house whilst she crawls underneath is particularly nasty. I also appreciated the dark humour of her legs poking out from underneath the house in the manner of the Wicked Witch of the East.

Musicality: Daniel Licht’s opening theme is a gorgeous piece of music. There’s a melancholy romanticism that soon gives way into the more childlike and sinister choral piece that sets up the tonal shift into the discovery of the corpses.

A King thing: Locations having an influence on the events around them has been mentioned before during the Pet Sematary revisit, but Children Of The Corn II presents a different spin on this idea. Frank Redbear tells John that the local source of power is something that magnifies both the good and the bad, responding to the intentions of the people nearby. Micah was clearly already a bit of a bad dude.

Join me next time, Constant Reader, for The Dark Half.