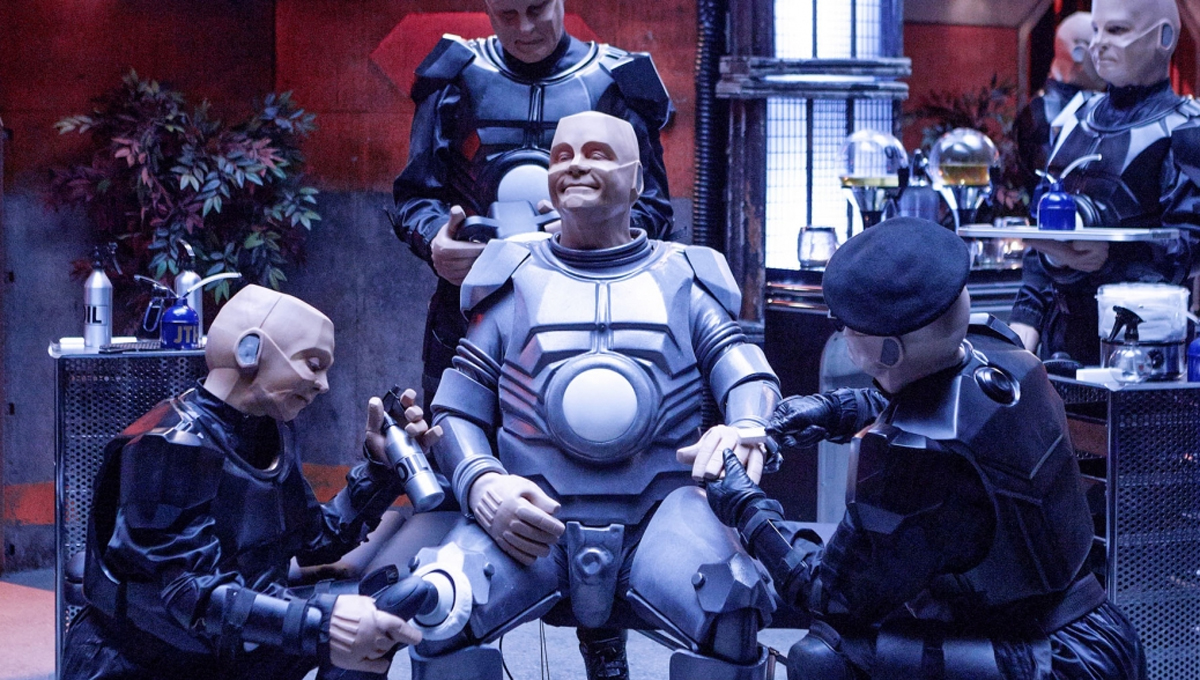 “Our heads are sensibly shaped.”

Kryten is inarguably Red Dwarf‘s most iconic character. The rubbery, angular mask of the mechanoid head is a marvellous design that should probably stifle any actor wearing it, but Robert Llewellyn’s performance has only become more impressive over time. In terms of design and personality, he’s the character who could scarcely belong to any other show.

Aside from Llewellyn, only a few other actors have donned the mechanoid get-up in previous episodes, but a lot of what we see in Siliconia feels like it’s been on Doug Naylor’s wishlist for a long time now. Almost thirty years after David Ross originated the character in Series II, this episode makes the single best use of that design in the show’s history, with a staggeringly ambitious production that finally shows exactly how much more they can do with Red Dwarf in the Dave era.

Furthermore, through some selective reading of Asimov’s first law of robotics, the MILFs sentence his crewmates to carry out all of Kryten’s old duties, including mopping, ironing and creating thousands upon thousands of Sugar Puff sandwiches. To ensure their obedience, they archive their organic bodies and upload their minds into new mechanoid replicas. That’s right – for one night only, Craig Charles, Chris Barrie and Danny John-Jules get to be novelty condom heads as well.

The show has enjoyed the benefit of a larger budget in these more recent series, but this feels like the first time they’ve really made the most of this boost. Despite the gaps between new series being broadcast, the show continued to look better through the 1990s, so there wasn’t quite as much of a gulf as there was between, say, the last episode of Doctor Who‘s original run in 1989 and Russell T. Davies’ first in 2005. On the other hand, Siliconia is the closest that Red Dwarf has ever been to that New Who production value.

But while it seems as if no expense has been spared, Naylor’s eyes may have been a tiny bit bigger than his belly here, and 28 minutes isn’t quite long enough to get the most out of a killer one-off premise. What we do get is great, and it’s hardly a complaint that we wanted more of it, but there’s a lot going on here. Maybe too much, even.

We’ve heard Barrie’s impression of Kryten’s accent in the show before, but it’s always enjoyable, and Charles and John-Jules get in on the act to amusing effect as well. But of the principal cast, only Rimmer gets a strong arc here – his early pompous declarations about the privilege of thinking give way to mechanoid programming as he (almost poignantly) realises his life could be much simpler and happier than it has been up until he got “Krytenified.”

There are some really fun setpieces, centring around a robot slave survivor group sharing traumatic tales of their head shapes being insulted (Rimmer gets the best new one of the episode, calling Kryten “badly stacked Jenga head”) and a gladiatorial mopping contest climax, but other avenues are sadly unexplored by the time the credits roll.

For instance, it doesn’t do much with the reveal that a class system has emerged, with guest star James Buckley and his colleagues consigned to grunt work, all because their hypocritical masters are 7.6 millimetres thinner, 10 grams lighter and come in that cool matt finish (“So cool!”).  It’s all waved away when the titular Siliconia, a mythical Silicon Heaven-like paradise that actually turns out to be a DivaDroid automatic update station, arrives to level the playing field, and puts the “machina” in deus ex machina in the process.

We’re almost on Rimmer’s side here, in that we think Lister’s guitar is to blame. Pacing problems aren’t new to the Dave shows, but the mission to salvage the instrument from space (apparently on the one-year anniversary of Series X’s Fathers & Suns) bookends the episode, and could probably have been saved for another instalment, given what a unique opportunity this particular story presents.

As we say, none of this is intended to be overly critical – Siliconia is a real fan-pleaser, with a lot of ambitious ideas and a lot of laughs. On top of that, it’s the best looking episode of Red Dwarf ever made, by a clear light-year. But most of all, it presents a really fun challenge for Barrie et al, giving them the same make-up treatment that Llewellyn has endured for decades and then letting them rip. Naylor’s reach may sometimes exceed his grasp, but gosh, that’s some reach…