Red Dwarf: 8 ways it got around the ‘no aliens’ rule 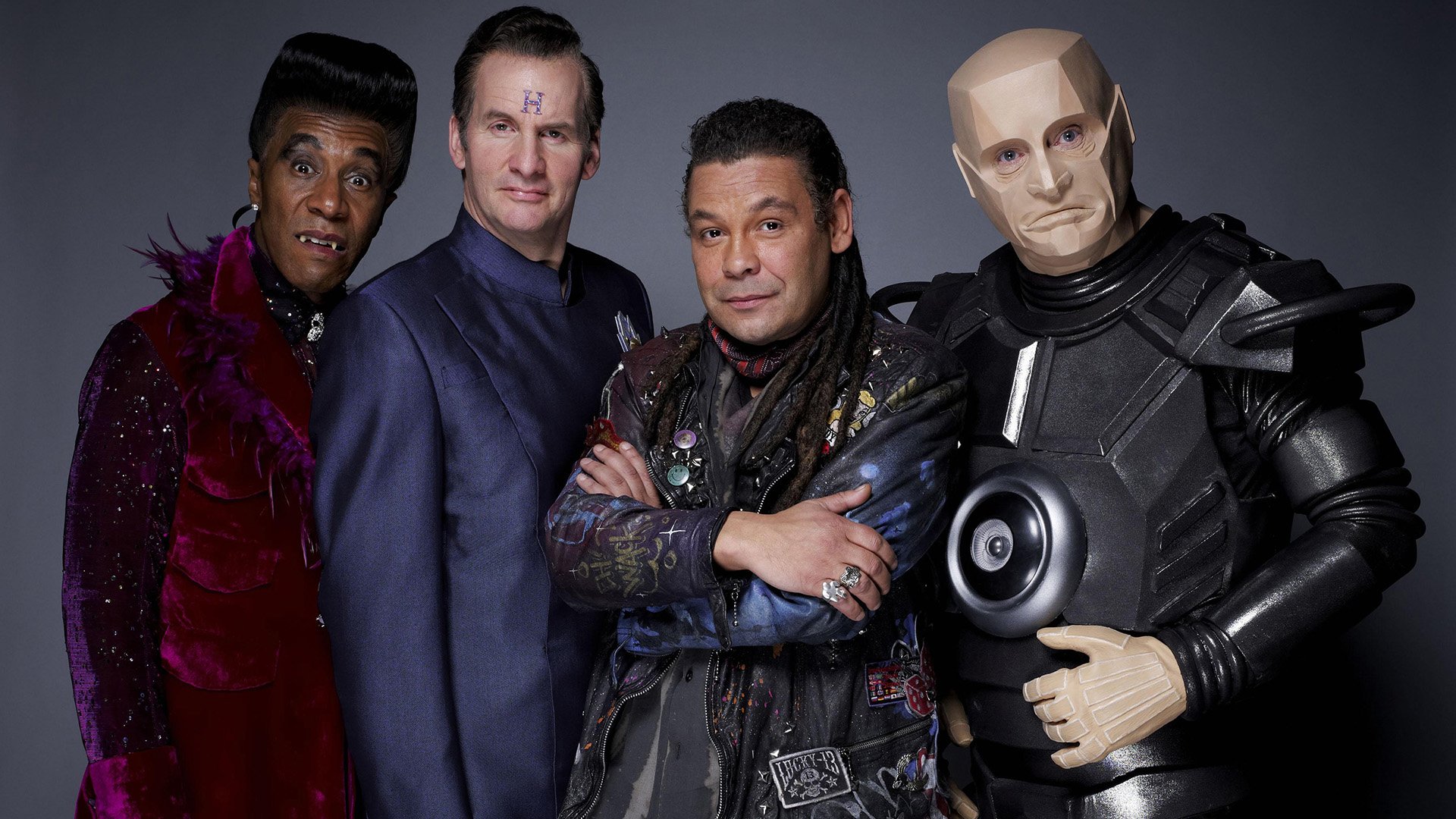 Red Dwarf is not the only space opera to have a self-imposed rule against intelligent alien life appearing on the show. Other shows have also chosen to avoid little green men, rubber-faced aliens or Henson workshop puppets to portray a universe inhabited entirely by humans, their inventions and the occasional bit of Earth wildlife, and others will again (all this has happened before, all this will happen again).

However, Red Dwarf has one big disadvantage that other shows which decline to explore intelligent alien life do not. The set-up of the show is that Dave Lister is the last human being alive and that he is marooned in deep space. Usually, the idea behind avoiding aliens is that the series can tell rich, human stories. Alternatively, in a feature film, a human being might be left alone and the film might explore their loneliness. However, over the course of a long-running series (67 episodes so far), no matter how effective the exploration of Lister’s loneliness might be, it becomes unsustainable as the sole source of the action. Simply put, he needs someone to talk to. And so, from the very beginning, Red Dwarf has turned to increasingly inventive ways of providing other characters – both regular characters and various guest stars – for Lister and his not-quite-human crewmates to interact with. This is, of course, the most obvious way to fill space with more characters, and Red Dwarf has run the whole gamut of artificial life forms – small, mute service droids the Skutters, AIs with IQs of 6,000 (the same as six thousand PE teachers), nanobots, androids designed to serve humans, wax-droids made for amusement parks, highly realistic virtual reality computer programs, and chatty household appliances. As time went on and the writers started to expand the series (and look for new ideas) they started to need antagonists, and here artificial life forms stepped in to fill the breach once more, this time in the form of rogue simulants – the important difference between an android and a simulant being that an android would never rip off a human’s head and spit down his neck. Tricky to know how to label these – basically, Red Dwarf is rather good at finding ways to incorporate other humans, despite the fact that Lister is supposed to be the last one alive. Chief among these are holograms – human memory files and brainwave patterns transferred into a body made entirely of light. However, we have also met other humans through body swaps (putting their memories into a living body rather than a holographic body), clones, people reconstructed entirely in body and mind by nanobots, people with an extremely short lifespan printed on a 3D printer, people who (like Lister), were put into stasis (usually after they had gone quite, quite mad), zombies kept alive by viruses, and humans from other dimensions. Sometimes, former human holograms from other dimensions. The gestalt entity Legion probably belongs in this category as well. The occasional pet sparrow/tyrannosaurus rex aside, the main form of wildlife around is the Cat. Since Red Dwarf is marooned in deep space and has only managed to get to Earth of the past (or, in the case of Backwards, the very far future), it is unknown whether any life survives on Lister’s home planet. It is equally unknown whether there are any other survivors of the great war that ended the Cats’ civilization aboard Red Dwarf – it certainly seems likely at this point that the Cat is also the last of his species. Anyway, the Cat is neither alien, nor human, but an intelligent life form who represents the pinnacle of feline evolution. Well, sort of – the Cat does not seem to have been considered very bright by his long lost family, but then, he is still around and they are not.

GELF stands for Genetically Engineered Life Form and essentially, GELFs fulfil all the roles aliens would fulfil in another space opera. They are beings created by humans for scientific or commercial reasons, and while the human race appears to have died out, there seem to be plenty of GELFs around. They were introduced via the animalistic Polymorph – though the Polymorph proved itself more than capable of human speech when posing as Rimmer’s mother or as an attractive woman. (We do see a host of alien-looking creatures in the virtual reality game Better Than Life, but these are not real but part of the computer program, so could be either GELFs or fictitious aliens – considering Rimmer’s desire to find aliens, probably the latter). Most GELFs look quite alien, ranging from humanoid to giant blobs, though some have the ability to shapeshift, depending on their original purpose. They are often antagonists, but they have also been love interests, diplomatic partners and on one memorable occasion, a spouse of one of the Red Dwarf crew. Related to GELFs, the Dwarfers have also come across the occasional unfortunate reminder of terraforming gone wrong. The Despair Squid, which brings on powerful but thankfully non-corporeal hallucinations, is essentially a type of GELF, a creature that was created as part of the process of terraforming a barren planet, left alone to prey on anyone who is unlucky enough to get near it. Quite why anyone was terraforming planets, moons and so on this far out into deep space is a bit of a mystery, though to be fair, they might have been using faster-than-light travel technology invented long after Lister and Holly’s time of which our heroes are woefully unaware. One of Red Dwarf’s greatest hard sci-fi jokes was at the end of Series 6, when the crew found a time machine and used it to travel to the year 1421. They looked out of the window in excitement… and everything looked exactly the same, because they were still in deep space, just deep space in the fifteenth century. Most of the time, however, time machines or other time-displacing whirly things in space display extraordinary geographical range, as well as temporal fluctuations, and our boys inevitably end up back on Earth and interacting with other humans, albeit in the wrong century, the wrong century in the wrong timeline, or even the wrong era in the history of the universe (the Earth they visit in Backwards technically belongs to the far future, after the universe has started contracting).

Three million years into deep space, the various diseases, viruses, conditions and so on that we know and hate have mutated. This is a concept familiar to anyone who’s looked into retrospective diagnosis (the diagnosis of historical diseases from surviving records). What we recognise as a cold, flu, measles or bubonic plague might have had a slightly different set of symptoms two thousand years ago. So far, so sensible. But apparently, what 3 million years in deep space does to pneumonia is, firstly, it gives you hallucinations, and secondly, these hallucinations are solid. Meaning they are real, alive, solid. Impressively so – they can be eaten, murdered or blown off into deep space. If solid hallucinations as a symptom of sickness weren’t enough for you, apparently somewhere in the three million years humankind spent shooting GELFs, rogue simulants, wax-droids, holographic former humans and spaceships run by hyper-intelligent computers out into deep space, they also created moons that terraform based on your psychological state, thus blending options 5 and 7 into a spectacularly disastrous whole. Which brings us to another point…

8. If in doubt: Multiple Rimmers

It’s tricky coming up with new characters and new ways to bring them into a supposedly empty universe all the time – plus, actors cost money. One of the quickest and simplest ways to expand your cast of four or five people is to simply replicate the characters you already have, using a wide variety of the above methods. And for some reason, the burden of this particular trick falls on Chris Barrie more often than anyone else. Over the years, we’ve been treated to extra Rimmers as a result of holographic technology (Me2), contact with humans from other dimensions (Dimension Jump, Parallel Universe, though the latter was female so Barrie got a rest), contact with holograms from other dimensions (Stoke Me A Clipper), time travel (Stasis Leak, Timeslides, Out Of Time), clones (Rimmerworld), clone-like copies of certain elements of the crews’ personalities (Demons And Angels), virtual reality computer programs based on his diaries (Blue), physical manifestations of his own psychological problems (Terrorform) and 3D-printed Rimmers (Officer Rimmer). Several of these incidents involved multiple versions of other crew members as well, but it really does seem to happen to Rimmer more often than anyone else, largely because deliberately replicating himself (as he does on several of these occasions) seems to be the only satisfying outlet for his enormous ego.