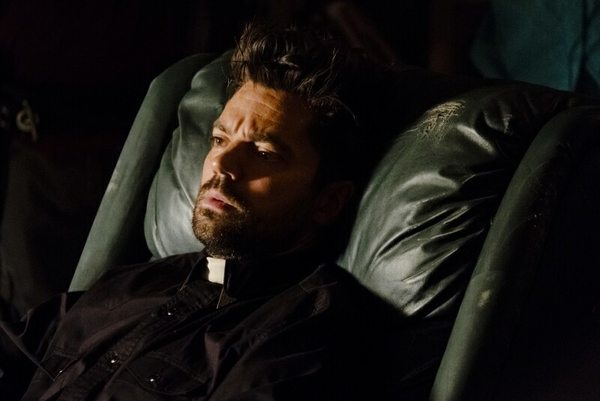 The latest Preacher season 2 episode is funny, suspenseful and a good reminder of where the power really lies. Spoilers ahead…

The Grail has proven its power on several occasions, but there has been nothing quite as impressive as the feat that Herr Starr’s organisation has been able to pull off this week. Jesse Custer is faced with an enemy that cannot be controlled, cannot be reasoned with, cannot be beaten or killed, and the only people who are able to get him back in line come to Jesse’s aid because The Grail asked them to. That’s the sort of thing that Jesse doesn’t have, even with the gift of Genesis inside him. The Saint was the only thing he couldn’t stop, until he gave a piece of his soul to it, and then he couldn’t banish the Saint completely from the Earthly realm because he didn’t have the fortitude to send a piece of himself to Hell.

One of the key points of the comic book was that when Jesse used Genesis on the Saint, it worked the first time. However, once he’d used his weapon on the merciless cowboy killer, it was no longer effective because the Saint could draw and shoot as fast as Jesse could speak, essentially putting them on equal footing. Jesse uses Genesis once on the Saint successfully, but without that sliver of soul, it won’t work on him, so when the Saint returns during this episode, he’s unstoppable. He beats Tulip, Cas, Denis, and Jesse handily, and the only thing that stays his hand is blackmail courtesy of Herr Starr and the authority of Hell (though I feel like if he wanted to, he could resist Hell’s power just as easily as he resists Jesse).

It’s interesting how the Grail chooses to confront individuals with true power. Certainly, there’s the element of blackmail that seems to work across the board. Everyone has something to lose. The Saint’s family could easily be moved from Heaven to Hell if he doesn’t cooperate. For Jesse, however, the blackmail isn’t nearly as personal. The fate of humanity is what his concern is, and with the options being himself or Humperdoo, well… that’s not much of a choice, all things considered. Both men are immensely powerful, and yet it’s their concern for the well-being of others that keeps them reined in.

One of the positive elements of the episode is the script from show-runner Sam Catlin and Rachel Wagner. It’s funny. There are a lot more of the show’s core elements on display this week, with Cas and Tulip having some extended, funny conversations regarding who is in charge of things when Jesse isn’t around. The lack of focus on Jesse’s mission helps, because it gives the show more of a chance to just be charming and amusing, at least until the Saint shows up. Hoover’s moments with the Saint also work, if only because Hoover is such an amusing character—the perpetually cheerful, perpetually downtrodden lackey who isn’t cut out for his job but tries his best anyway isn’t the kind of guy you’d want to match up with a supernatural monster, but he kind of is because he’s smart enough not to pick a fight with the Saint or hang around too long once he lets the Saint go from his prison.

That’s a fun moment that director Michael Slovis emphasises, but in the end, after the joke of Hoover fleeing as fast as his white-suited legs can carry him, the laughter is over. The Saint is back in a big way, and he’s ready to give Tulip more nightmares. His entrance into the apartment building is really well done, with Tulip taking out the garbage becoming very suspenseful as she walks past the open door once, but not a second time. The fight scene that follows stretches out a little bit too long, but everyone gets an appropriately brutal beating for their troubles, with the killer cowboy back to his old tricks and him putting a hurting on all three of the main characters without even really breaking a sweat. It’s a nice reminder of just what a threat the Saint can be, and it’s a thinly-veiled threat. The Grail came in and saved Jesse’s life, but if he gets out of line, they can always unleash their attack dog again.

At the end of the episode, there’s a wonderful visual moment where Starr kneels in front of Jesse and places Jesse’s hand on top of his head. Jesse is the person in charge, but Starr is still the person who controls things. He kneels voluntarily before Jesse, and he physically places Jesse’s hand on him to bless him. It’s a telling metaphor for the working relationship Jesse is getting himself involved in. He might be the faux Messiah, but Starr is still the man running things behind the scenes.

US Correspondent Ron Hogan would kind of like Preacher to leave New Orleans next season. They probably won’t, but it’d be nice to see them head to a different location in the South. Maybe Nashville. Find more by Ron daily at PopFi.