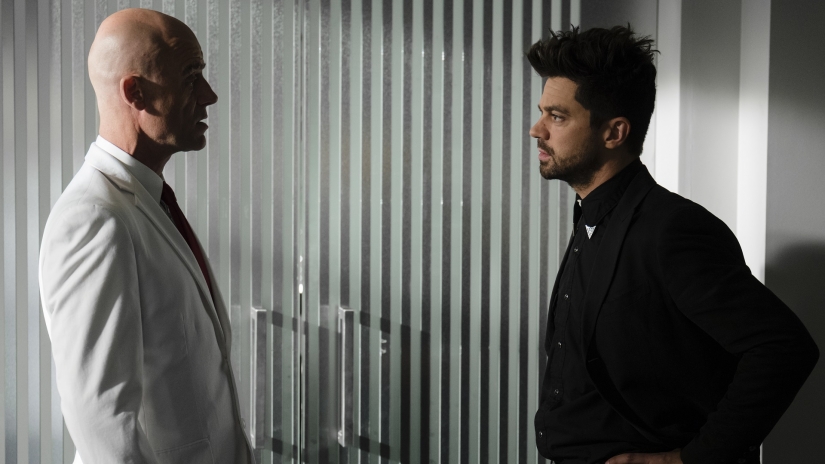 Whatever you might say about the additions to the source material, there’s no a doubt in my mind that Preacher is trying to stay as true to the original comic book as humanly possible. Things have been adjusted to be slightly more palatable and less graphic for public consumption, but everything people wanted to see from Preacher is still there on TV in one form or another. The show hasn’t shied away from the scatological, scandalous, and sacrilegious elements that made the comic a hit and inspired Seth Rogen and Evan Goldberg to bring it to television, devoting years of their lives and careers to making this happen the way they wanted it to.

Perhaps the show is too niche to court much controversy, but if there is a group of people out there willing to start complaining, they’ll find them this week and enrage them. One of the biggest elements of the comic book was that The Grail had in their possession the Messiah, a horribly inbred descendent of Jesus Christ whose holy bloodline was kept pure thanks to 25 generations or so of inbreeding. The end result, as Starr says in conversation with Jesse, is more inbred than a Maltese puppy, with a litany of problems that leave him unable to assume the role that The Grail had in mind for him.

I wondered just what plan Starr had for Jesse Custer, and just why he had Featherstone working so hard to get involved in the Jesse/Tulip relationship. It all comes together in this episode. Starr needs a new figurehead, a useful figurehead, and Featherstone needs to sever Jesse from his friendships by pushing Tulip into finding the Saint’s hidden guns and sword. Tulip and Featherstone’s growing relationship is proving to be interesting, because Featherstone is really good at manipulating someone like Tulip, who is very much a straightforward thinker.

One of the cooler moments of the episode is the way Jesse’s trip to see Humperdoo is shown. Jesse gets a bag on his head and he’s led through a travel montage. Planes, trains, automobiles, everything short of the city bus is used to take Jesse from America to, presumably, a monastery or monastery-type setting somewhere exotic. Multiple shots, including of the monastery setting itself, are shown as filtered by the cheesecloth over Jesse’s face. Steph Green also has a really fun crane shot of the Grail van driving away from the apartment with Jesse inside.

The most important bit of this episode, the budding relationship between various Grail operatives and Jesse’s crew, works fairly well in Mary Laws’ script. Jesse and Starr may or may not need one another, but there’s definitely something between them. Starr is intrigued by Jesse’s power, and Jesse doesn’t seem as intrigued by the Grail’s power, as they can summon the Pope and the Archbishop of Canterbury, but can’t find God aside from his mentally and physically impaired great grandson.

That’s not exactly going to win someone over, even if they do have access to attack drones, but Starr, as we see in the final moments of the episode, has a bigger plan for Jesse, and a plan that will require Jesse to lose every friend he has in the process. Step one, taking Tulip. Cassidy is distracted by Denis, so he might not even be necessary to scare off (though the Grail revealing that Tulip and Cassidy slept together would eliminate that friendship fairly easily).

That’s part of the Grail’s ruthlessness. The individual doesn’t really matter, be it Hoover getting his ribs broken or Featherstone having to bite the bullet and actually pretend to be nice to Tulip. Even the Messiah is essentially useless, since Starr knows he’s unable to do the only thing the Grail needs him for. He’s important for the others, presumably to keep them distracted and working for a bigger goal, but Starr is the one who determines that bigger goal, and a little thing like trampling Jesse’s friends is nothing to him.

But will Jesse fall for the allure of power that even the Voice can’t provide? That remains to be seen. Without his loved ones, will the quest even matter anymore? Or will he be so single-minded in pursuit of the quest that he’ll crawl into bed with Herr Starr?

US Correspondent Ron Hogan was very surprised by what Preacher was able to get away with this week. Not every day you see that kind of stuff on TV. Find more by Ron daily at PopFi.