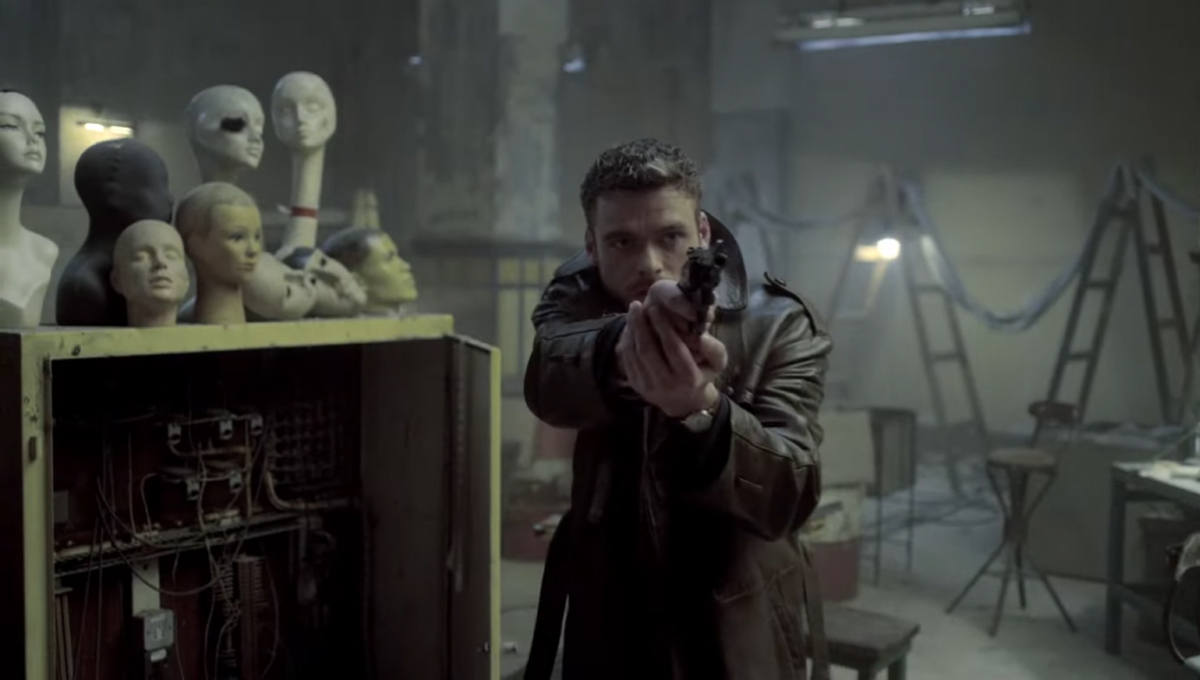 A hunched robot in a Pac a Mac creeps behind a pillar. A quintet of babies with floating umbilical cords dance a ring of roses in mid-air. A neon sign advertises the services of a four-breasted woman. Welcome, say the opening credits, to the world of electric dreamer Philip K. Dick.

Or more properly, a world inspired by Philip K. Dick. Episode one of this ten-part anthology series has taken liberties with Dick’s 1955 short story The Hood Maker, and quite rightly. That was written under the shadow of McCarthyism, when loyalty and betrayal were matters of state. This was written under the shadow of the Snooper’s Charter and corporate data mining. In the fifties, PKD imagined the government reading our minds to sniff out traitors, not ISPs doing it to hawk our preferred brand of cat food to the highest bidder.

Though set against the backdrop of the right-to-privacy debate, this version of the story feels as interested in the role of trust in romantic relationships. Can we ever know how our partners really feel about us? Mystery and secrets are alluring, but lies are corrosive. How much can we afford to take on trust? That’s the question we’re left with by its cliff-hanger.

Screenwriter Matthew Graham (Life On Mars, Ashes To Ashes, Doctor Who) has used PDK’s story as a seed, a jumping-off point. He and director Julian Jarrold (Brideshead Revisited, A Royal Night Out) have held onto the premise of the state using telepaths to interrogate the public, and, give or take a few character names, chucked out more or less everything else.

The robot cops and ray guns have gone, for instance, as has any trace of future technology. Co-lead Richard Madden (Game Of Thrones, Klondike), who plays Agent Ross, explains here that though it’s never mentioned, a meteor shower decades earlier in this world knocked out anything more high-tech than a rolodex. Nor is it stated that, as Madden said, radiation from the same event was responsible for the creation of a group of telepaths, or, to give them their pejorative name, ‘teeps’.

Such a prologue would have been unnecessary. PKD fans are used to being thrown straight into the action, and with only an hour to play with, it’s a requirement here. Anyway, thanks to PKD and others like him, we’re fluent in sci-fi now. It’s enough to be dropped into a grimy city where unused laptops are piled high in the corners of dilapidated office buildings and typewriters sit on desks to know that Something Happened. Thanks to Blade Runner, we’re fine with the whole future-is-past noir thing too. Birth-marked telepaths also need no introduction. Start with a protest against them and we understand. They’re other, a stand-in for whichever oppressed minority group treated with mistrust and hostility you might care to choose.

There’s good reason not to trust the teeps, however. They’re powerful and they’re planning something. At least that’s the belief of the Clearance Department which puts Agent Ross on an undercover mission to partner with one (Holliday Grainger’s Honor) and do whatever it takes to find out what’s coming. What it takes involves seducing her, but are his feelings real or simply an act? Ross has evolved a natural barrier to the teep probe, making him the only choice for the job. Honor couldn’t read his mind even if she wanted to. And neither can we.

Grainger brings a welcome accessibility to Honor, earning sympathy despite displaying chilling mental power. One of the hour’s most captivating scenes shows her interrogating a suspect and confidently bringing him under her psychic control. As a necessity of the story’s twist, we spend much more time in her head than in Ross’, and it’s a noisy place. Only when she puts on one of the mysterious teep-blocking hoods in circulation does she experience a moment of sacred quiet.

The hoods provide the episode’s most effective, creepiest images. Masks are always scary, and these blank, classically sculptural faces (another addition – in PDK’s story the ‘hood’ is simply a band of metal that can be disguised underneath a hat) are just that. The confrontation between the teep rebels and the hood maker in his print works too, is beautifully and eerily composed.

Unaware that she’s a guinea pig, Honor sets about her work weeding out insurrection among anti-teep protestors. She’s software, she says, a label borne out by the scene in which she tunes into the teep ‘grapevine’ to search out information relevant to the case. In this world, teeps are Google, but instead of scanning your emails for ad-targeting, they can read your mind and reveal your deepest secrets.

Predictably, a few ‘normals’ have seen fit to defile this power and abuse it for their own sexual satisfaction. (There isn’t a sci-fi world imaginable, it seems, where men don’t get their rocks off by abusing women, though, to its dubious credit, at least we aren’t walked through any teep strip clubs here.) The ins and outs—pardon the pun—of the teep brothel system however aren’t all that clear: is it really so hot to have your own fantasies repeated back to you?

Whatever questions it raises, the brothel thread is there to provide a reason for the teeps’ violent revolt. Because of their psychic connection, mistreat one and you mistreat them all. There’s a very good explanation for their turning against Paul Ritter’s sadistic Franklyn, whose sexual kink has traumatised the community.

There’s fuzzier logic in their destruction of the mysterious hoods Honor and Ross have been charged with tracking down. Yes, they’re a weapon and capable of causing teeps pain, but as Honor shows when she stems the constant noise in her mind, they could also offer respite and—as she says she and her fellow telepaths want—a chance at a normal life. Take away their gift and they’re just like anyone else.

Unless of course, Honor was lying too.

There’s no time to explore the many possibilities, which is where an hour’s trip to such a richly imagined and effectively evoked world falls short. There’s so much more to discover here. That’s always been Philip K. Dick’s gift – a handful of pages in one short story spark countless new ideas and questions. The frustration doesn’t diminish the experience of such a well-acted, enthralling sci-fi thriller though. It’s always best to be left wanting more.