Peaky Blinders series 4: who is May Carleton? 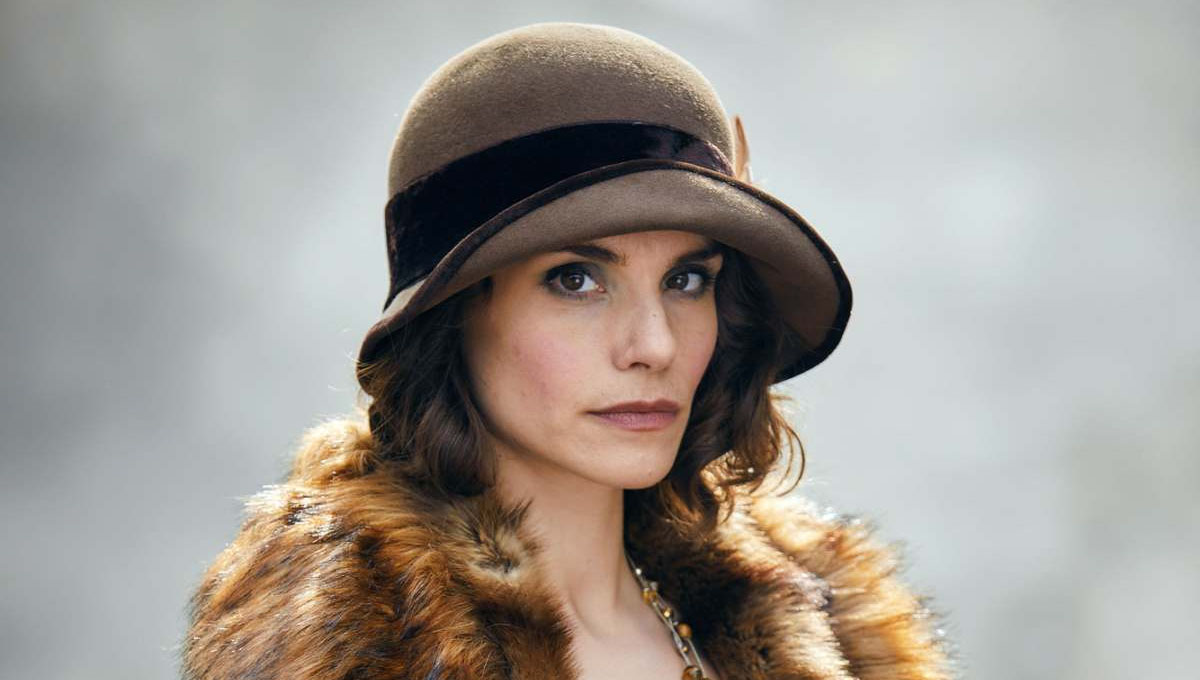 Charlotte Riley’s series 2 character reappears in Peaky Blinders this week. Here’s a refresher on her background in the show…

Series four gave us the brief return of Charlotte Riley’s aristocratic race horse trainer May Carleton in episode two. May turned up at Charlie’s yard, collected Tommy’s new horse, promised Curly she wouldn’t use the crop on her, and left. In episode four, she returns for a longer stay. Should anyone need a reminder ahead of tonight’s Peaky Blinders, here’s what we know about May.

Tommy and May met at a horse auction in series two. His underworld glamour caught her eye, so she bid against him to get his attention, driving the price of his filly up considerably. Tommy wanted the horse, so he got the horse. As he says in series four, he’s used to getting his own way.

Post-auction, May approached Tommy and offered to train his race horse, citing her connections in the racing world. Never one to pass up an in with someone on the board, Tommy took her card and engaged her services for the Epsom Derby, paying her a handsome sum for the job. While they were talking, Arthur and John did their best to embarrass May with rude jokes and references to Tommy’s gypsy background, but rather than frightening her, she found it all amusing.

An aristocratic widow who lost her husband at Ypres, May was clearly attracted to Tommy’s bad-boy swagger. She surprised Esme with a visit to the bookmaking premises at Watery Lane, having wanted to see a gambling den as she was always reading about them in The Telegraph. The violent, criminal world of the Peaky Blinders was dangerous and fascinating to a woman of her background, though she wryly remarked at one point to Tommy, “you think your people are ruthless, try mine.” May was partly attracted to Tommy’s power. “When I drove into Small Heath I thought I was going to be murdered,” she told him. “Then I mentioned your name. It was like being escorted to see a king.” His lack of aristocratic manners was another source of entertainment. When Tommy took her to the new-look Garrison Pub (decked out in gold after the post-explosion renovation), he amused her by pouring a tumblerful of gin with no mixer.

In her research, May discovered Tommy’s shady background, but also the two medals he won for gallantry in WWI. She was mostly unfazed by his criminality and straight-talking. He asked her “Do you want to fuck me, Mrs Carleton?”, and she told him she was purely there for the horse, which he named ‘Grace’s Secret’.

Tommy’s interest in May wasn’t solely down to her beauty either. When he first drove along her mile-long drive and clapped eyes on her sprawling mansion (a single exclamatory “fuck” escaping his lips), that may well have been the moment Thomas Shelby set his sights on getting a stately home of his own.

At her house, she reveals how lonely she is since the death of her husband and they talked each other into Tommy spending the night. He said he’d come to her bedroom at midnight and none of the maids would know and—foreshadowing the lessons Tatiana taught him in series three—she replied “You don’t know maids”. He did go to her room and they had sex to PJ Harvey’s Is This Desire?, intercut with Arthur and the boys beating someone senseless.

May became bolder about her affair with Tommy in front of her servants, who treated him with mistrust because of his gypsy background.

Tommy, though, was still in love with Grace. He met with her while she and her American husband were staying in London at The Ritz. Tommy and Grace had sex. When Grace asked Tommy if he had someone in his life, he told her “I have a race horse. She’s going to win the Derby.” The next episode, Tommy visited May and told her their affair had to stop. “There’s someone,” he told her. “Forget about men like me.” Visibly hurt but remaining composed, May suggested they may as well keep up their sexual relationship because “half of London already thinks [she’s] fucking a racketeer”. “You’ve told me about her like a gentleman, now kindly behave like a gangster again,” May said, ending on the promise, “Your horse will come fifth or sixth, but I will win you.”

On Derby day, when Tommy was being forced by Campbell to carry out an assassination, he came to say goodbye to May. Thinking he may well die, he told her “Whatever happens today, it was good. No regrets.”

May ran into Grace at the bar and engaged in a bit of rivalry. She hinted that she and Tommy had had a relationship and boasted that she was helping him in his business venture to take over control of the bookmaking at the race track. “There’s business and there’s love,” said Grace. “Is there,” asked May, “with Tommy Shelby?”. When Grace asked May what she saw in Tommy, she told her “The same thing as you. I want to feel alive.”

In the series three opening episode, the identity of Tommy’s bride—either May or Grace—was kept secret until her veil was drawn back.